Another year. Another Comic-Con. New York Comic Con is one of our favorite times of the year. We love catching up with old friends, finding out about new wrestling comics like Adam Del Re’s Slabrock, seeing wrestling-based comics like Headlocked continue to rise, and looking at old school Hasbro’s that we can never afford.

But what would New York Comic Con be without cosplay? If you’ve ever been to a con, you’ve probably seen your fair share of Dark Knights, Deadpools, Death Note’s and Doctor Who’s. And that’s great. But we love when people trade in the Sonic Screwdriver for the Steiner Screwdriver and dress as there favorite wrestlers.

Thankfully, there was a lot of wrestling cosplay this year. And with the help of the Three Man Booth elite (Drew and Khristen), we were able to capture some of the best NYCC wrestling cosplay.

Here are some of our favorites: 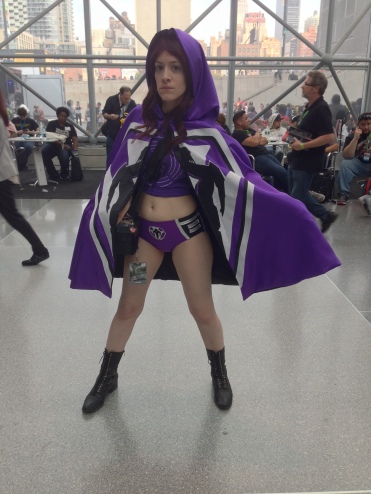 Gravity may have forgotten Neville, but we can’t forget Kiera

He can and he will cosplay as Roman Reigns

Anyway, back to the cosplay.

The cruelest of all creatures…Tiger Millionaire!

And how could we not love this tribute to Rowdy Roddy Piper? (Photographed by Drew)

We have plenty more Facebook and Tumblr pages, so check it out there. Thanks for the memories, Comic Con! We’ll see you and your army of Deadpools next year.