We had an incredible time at RAW and used our own photos for this week’s recap. If our photography is not up to par, blame The Third Man.

RAW begins with a quick recap of Wrestlemania then John Cena’s music hits and he comes out eliciting a sizable amount of boos. John Cena tells his BFF, Stu The Cameraman, that he looks good in white and gained 14 pounds over night. Stu lost 14 pounds on a new diet, but doesn’t brag about it, unlike John Cena. 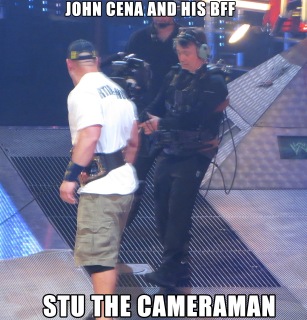 Dare I say, it’s actually strange to see Cena with the belt again. #RAWBest Part of Being at #RAW: Seeing Stu the Cameraman Go To Work when Cena Comes Out. #HardestWorkingMan
— ThreeManBooth (@3ManBooth) April 9, 2013

John Cena says it should be every WWE Superstar’s dream to be in and win the Main Event of Wrestlemania because when you win, you get to enjoy everything that goes along with it. The Adulation (He gets booed.) The Respect (He gets booed.) The Cheers (He gets booed louder!) Cena keeps asking about The Cheers but gets booed further. Cena tells the WWE Universe that they’ve known each other for 10 years now, and says that he may be going out on a limb, but the WWE Universe seems a little bit angry. Cena says the crowd is upset because Wrestlemania is over, but reminds them that wrestling has no off-season. The crowd interrupts him by chanting boring.

John Cena says the day after Wrestlemania is more than that then reminds the crowd of when Brock Lesnar beat him up. Cena says he’s feeling pretty good tonight and that he may do some sort of Championship Dance tonight. Cena teases doing a shake or a kick, then asks about doing a Heel Turn, then does a dance with his heels which the crowd pops for.

John Cena says a famous blonde Hall Of Famer once told him “To Be The Man, You’ve Got To Beat The Man” and last night he beat The Rock and despite The Rock’s injury, a champion rose. Cena proudly says, “THE CHAMP IS HERE!” as a “Same Old Shit” chant breaks out.

John Cena is the best heel in the business
— Langdon Alger (@KeepItFiveStar) April 9, 2013

John Cena says this is exactly what he wanted for a post-Wrestlemania celebration, then says he’s going to celebrate the only way he knows how: Fighting for the WWE Championship. Cena says he doesn’t know who the number one contender and doesn’t care if it’s Dolph Ziggler, Randy Orton or CM Punk, tonight he wants to fight. John Cena’s interrupted by Mark Henry’s theme music!

Mark Henry gets in the ring and tells John Cena the problem with coming out asking for trouble is that trouble might just find him. Henry tries to state his claim for the WWE Championship, but is interrupted by a “Sexual Chocolate” chant. Henry calls Cena out for not paying attention to him, but Cena says it’s a raucous crowd that wants to have sex with chocolate.

Cena is entertaining me. It must be chilly in hell right now. #RAW
— Arya Stark (@prettyheartless) April 9, 2013

For The Record, You SHOULD NOT Have Sex with Chocolate. There are some Places Sugar Shouldn’t Go.
— ThreeManBooth (@3ManBooth) April 9, 2013 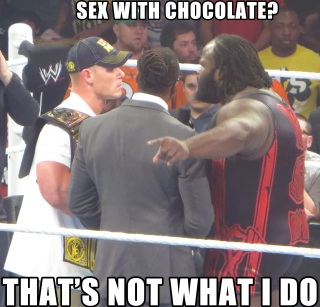 Mark Henry tells John Cena that he destroyed Ryback last night then challenges Cena to a match. Henry is interrupted by a “FEED ME MORE” chant. Cena says first the crowd wants to have sex with chocolate, now they want to eat some more.

Why’re you insulting him? He didn’t say anything negative about you, John.
— hates rednail polish (@YourBoyDrew) April 9, 2013

Booker T tells John Cena he appreciates that Cena is a fighting champion, but he cannot and will not have Cena coming out here and making matches. Booker T says that The Rock is entitled to a rematch since he is the number one contender for the WWE Championship. Cena mocks it by teasing “Once In A Lifetime: Best Out Of Three.” The crowd boos and Cena agrees with them.

Booker T tells John Cena that The Rock suffered injuries and will not be here tonight. The crowd starts chanting “Bullshit!”

Booker T tells Mark Henry that he’ll give him a shot at John Cena, but he’s going to have to earn it…in a match against John Cena tonight. Mark Henry tells John Cena that he’s full of jokes, but he’s not laughing. Henry says all that all of John Cena’s jokes are gonna get him entered in the Hall Of Pain, then tells Cena to bring his A Game.

*The Script voice* Entered in The Hall Of Pain!
— Langdon Alger (@KeepItFiveStar) April 9, 2013

Mark Henry is that kid in school who couldn’t take joke, and wanted to fight you when you clowned him.
— hates rednail polish (@YourBoyDrew) April 9, 2013

Not sure if AJ’s pants are a tribute to Harley Quinn or Samoa Joe.
— Langdon Alger (@KeepItFiveStar) April 9, 2013

Match 02: Wade Barrett vs. The Miz (For The Intercontinental Championship)

Lots of people from the UK in the crowd. Doesn’t look good for Miz
— Langdon Alger (@KeepItFiveStar) April 9, 2013 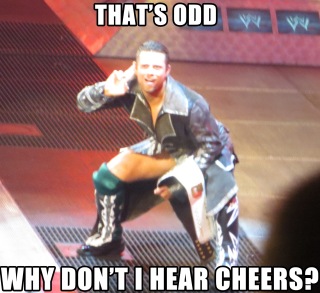 The crowd is pro-Wade Barrett.

Not only is Wade Barrett loving the crowd support, but he’s happy that Doctor Who is doing great in America.
— Langdon Alger (@KeepItFiveStar) April 9, 2013

I Can’t Tell If There Are a Lot Of International Fans For Wade Barrett or if the Anti-Miz Fan Club Recruits Globally
— ThreeManBooth (@3ManBooth) April 9, 2013

The Miz locks in the Figure-Four! 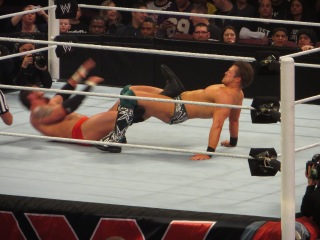 Did wrestlers just forget how to reverse the Figure Four? Like does that just not exist anymore?
— Chantel. (@HotRedLipstick) April 9, 2013

I wish Ric Flair had taught Miz the move where he gets bodyslammed off the top rope every time he goes up there.
— David Shoemaker (@AKATheMaskedMan) April 9, 2013

Wade Barrett breaks the hold then knocks The Miz’s head on the ringpost. Barrett hits the Bullhammer on The Miz for the win!

Backstage: Vickie Guerrero and Brad “#HeartthrobAssistant” Maddox are talking about the success of Wrestlemania. Sheamus interrupts them and vents about the Big Show knocking him out after the match was over. Sheamus demands a match with The Big Show, but HTA tells Sheamus that if they give him this match, he’ll owe them much. Sheamus doesn’t care and just wants to the match. Vickie Guerrero gives Sheamus the match.

Backstage: Booker T walks backstage getting congratulated by several people until he runs into Randy Orton. Orton congratulates Booker T then asks for a match against Big Show. Orton says he wants to right his wrong tonight, but Booker T tells Orton that Vickie Guerrero already made Sheamus vs. Big Show tonight. Orton reminds Booker T that he’s a Hall Of Famer and an actual GM so he can overrule her. Booker T agrees then gives Orton the match.

Randy Orton and Sheamus are acting like kids who go to a specific parent to ask for something because they know they’ll say yes.
— Langdon Alger (@KeepItFiveStar) April 9, 2013