It’s the Go-Home Fast Lane Edition of RAW. And while you should watch all of RAW if you can, here’s what you can watch and skip!

Dean Ambrose wants another shot at the beast but the Boss, Stephanie McMahon comes out instead.

That's not the Beast. That's the BOSS! (the other one.) #RAW

She calls Dean’s “victory” over Lesnar cheap and if Roman wasn’t there, it wouldn’t have happened. To prove her point, Stephanie puts Dean Ambrose in a Fatal 5way match for the Intercontinental Championship and add the stipulation that if Roman Reigns interferes in this match, Ambrose is out of the main event at Fastlane.

Dean Ambrose versus Kevin Owens versus Stardust versus Tyler Breeze versus Dolph Ziggler! Owens and Ziggler pick up right where they left off last week. Everyone else is swinging for the fences to take each other out. Ziggler hits a Superkick, Stardust hits Beautiful Disaster, Tyler Breeze hits the Beauty Shot. Kevin Owen Powerbombs Tyler Breeze onto Ziggler and Stardust! In the final stretch, Dean Ambrose puts Stardust in Dirty Deeds, Ziggler hits the ZigZag on Dean Ambrose while he’s hitting Dirty Deeds on Stardust. Breeze disposes of Ziggler just to walk into a Pop-Up Powerbomb from Owens.

That ending sequence was so good that I don't mind Breeze eating the pin. #RAW

KEVIN OWENS GETS HIS BELT BACK! #RAW

First, Renee interviews Dean Ambrose having just lost the Intercontinental title. Dean is upset that he lost the title but looks on the bright side: this means that his hands are free for something bigger.

Then, Kevin Owens interrupts into Renee, asking her to admit that Kevin Owens was right about being the champion again.

Then, Dolph Ziggler interrupts Kevin Owens’ interruption to congratulate Owens on the job well done. He then challenged Owens to a title match at Fastlane. Owens responds, “nah.”

Oh. Owens vs. Ziggler. Again. I mean, it's like pizza but it feels like pizza every day for a month. #RAW

I have it on good authority that world sourness is down 15% thanks to New Day. #RAW @TrueKofi @XavierWoodsPhD

The New Day announce they are going to be the guests on Edge and Christian’s talk show, The Cutting Edge Peep Show. It’s going to be Trombones versus Kazoos 2: This time it’s personal! Then they talk about the travesty of last week: how Mark Henry rejected being the World’s Strongest Unicorn to become the World’s Largest Bootyhole instead.

It’s a fun match though Kofi and Xavier seem to be having more fun outside the ring than Big E is having inside the ring. There’s a moment when Big E declares himself to be “Mark Henry’s Daddy” and he hits series of running splashed on Henry. Then, while going for the Big Ending, Mark Henry appears to be injured.

I think the ghost of Titus O'Neil had a hand in whatever happened to Mark Henry.

Big E gets the win but, more importantly, Get well soon, Mark!

Byron Saxton interviews Brie Bella to get her side of Daniel Bryan’s retirement last week (and to learn more about Daniel Bryan). Charlotte comes out to suggest that Brie should forfeit her match at Fastlane so she can go home and make goat faced vegan babies with Daniel. Brie kicks Charlotte as a response.

brie bella wont have charlotte talking about her beautiful vegan mixed race babies. not today. daniel bryan didnt leave the ring for that

Nobody insults Brie's goat faced babies and gets away with it. #RAW

Personally, I think Brie & Charlie are going to kill it on Sunday. 👍🏼

Jericho traded Sleeves for Scarves and never looked back. #RAW

The Miz is the surprise here. He’s fired up to get revenge on AJ Styles for knocking it out his tooth. AJ responds in kind. Plus, Chris Jericho is a nice change on commentary.

"AJ Styles has the look of a Hogwarts" – JBL, trying to bond with the youth through #RAW commentary.

The Miz makes his offense look even more painful than before, especially his short DDT.

AJ Styles delivers flying forearms from all angles! But it’s the Calf Crusher that AJ applies to the Miz as a counter to the corner clothesline that gets the win for the Phenomenal One.

Man, that was a great match between The Miz and AJ Styles! #RAW

The Miz just evolved from good wrestler to great wrestler. What a performance! #RAW

Post match, AJ challenges Jericho to Styles/Jericho III. Jericho has to think about it but will give his answer on Smackdown. 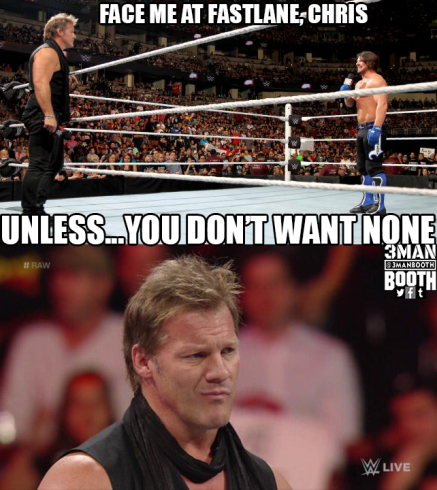 AJ's already getting his WWE motorskills. Look at him talking on that microphone! #RAW

When your boss explains the project too but you and you still have no clue what to do pic.twitter.com/TXWwmI3mRG

Bubba on #RAW: I'm afraid I have to be the bearer of bad news…
Barrett: I can't have anything to myself anymore… pic.twitter.com/rYwqJto9K3

It’s nice to see Paige and a surprise to see Summer on RAW. They both seemed off during the match. Summer Rae picked up the win on a surprise reversal, shocking everyone.

Paige wasn't my Valentine AND she lost on Raw tonight yet she still can do no wrong.

Heyman is confident that his client, BROCK LESNAR, will be victorious against Dean Ambrose and Roman Reigns at Fastlane. More importantly, Paul Heyman has something to say to Reigns’ face.

Paul Heyman's the third person to call someone out tonight but the first one to have the person ACTUALLY come out! #RAW

Heyman says that Roman can’t beat Brock Lesnar at Fastlane but Roman has an equally difficult challenge at Fastlane. Roman has to choose between the promise he made to his daughter, his family, and his “brother” Dean Ambrose, his friend. Those that choose friends over family end up in divorce court. Those that choose family over friends end up alone, even at the end of Wrestlemania.

That’s Roman’s dilemma. Roman says that he made a choice a while ago and he pays the price every night. And so did Dean Ambrose. That’s why they’re as close as they are and that’s why they’ve faced each other before (Roman won). And that’s why Roman will do it again at Fastlane.

A Paul Heyman One Man Show would win an #Emmy, a #Grammy, a #Tony and an #Oscar in a single year! #RAW

Paul and Roman shake hands. Then the Dudleyz attack Reigns!

When The Dudleyz surprise you by attacking Roman Reigns. #WWEFastlane #RAW pic.twitter.com/mzCQSgqWsy

Devon & Bubba ambush Reigns! And he was about to call Paul Heyman a tater tot! #RAW

Then, Dean Ambrose comes to ringside to save Reigns! After the ring is cleared, Dean goes for a Dirty Deeds on Roman Reigns but let’s go!

*#Ambriegns hugs each other on #RAW* 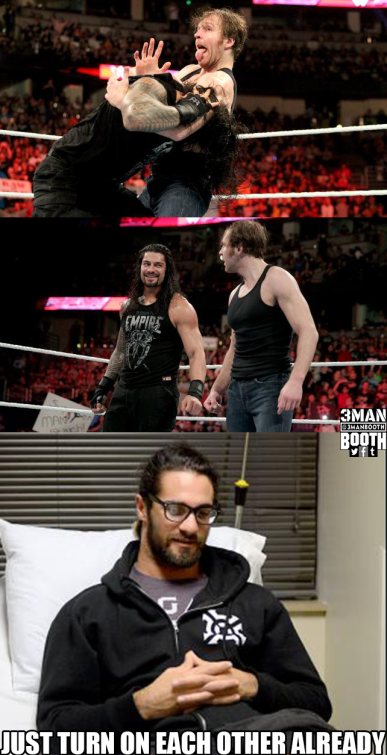 Next week, there will be an award given out. According to official, no one has deserved this award until now.

There's no way the recipient of the Vincent J. McMahon Award for a Legacy in Excellence ISN'T Vincent K. McMahon. #RAW

Hey, a beard worked for Ryu. I'm sure it can work for Zack Ryder. #RAW pic.twitter.com/Mq1jfF8Xaj

Heath Slater and his squad, The Social Outcasts, beat Zack Ryder and his beard.

"They Begged Me to Join Their Team." – Zack Ryder #RAW pic.twitter.com/8CrC1jcgbp

R-Truth is on a date; Goldust pretends to be his waiter. A bottle of Champagne needs to be opened and… you see where this is going.

Did I just see Goldust spray his champagne all over a black woman's stomach? #RAW pic.twitter.com/1VbpWsdTiR

IF YOU HAVE TIME:

The Lucha Dragons (Sin Cara and Kalisto) and Neville versus The League of Nations (Rusev, Del Rio and Sheamus with Wade Barrett) (2:26:46)

Look at the Neville, Kalisto and Sin Cara take to the sky! #SkyCommander #FlightClub #RAW

These Superstars never disappoint, especially high fliers like The Lucha Dragons and Neville. But it’s all done to set up Kalisto versus Alberto Del Rio at Fastlane. Plus, the high flying move of the match was Alberto Del Rio hitting a Guillotine Stomp on Sin Cara!

Wade Barrett's Victory Skip is perfect because 1) he did nothing and 2) it's timed perfectly with the League of Nations' Theme. #RAW

Alberto Del Rio looks like he went to the new barber at the barbershop #RAW pic.twitter.com/MIpLHYX6YE

Normally, watching Naomi versus Becky Lynch is the next best thing to playing Street Fighter, especially with Naomi hitting those Speedball Bailey / Chun-Li lightning kicks but The BOSS isn’t at ringside for this one.

Becky picks up the win with the Disarmher before Tamina attacks.

YES! SASHA!!! "HAD A DREAM I…HAD A BABY! CAUSE THE DOG' GON' PUSH EM ALL OUT THE WAYYYYYYYYYYYYYYYYYY!!" #RAW

Sasha stomps down to ringside, taking her earrings off with in one fell swoop. Tamina delivers a Samoan Drop to Becky before she and Naomi leave the ring for higher ground. These four will face each other at Fastlane.

How Becky Lynch feels hanging out with Sasha Banks on #RAW pic.twitter.com/ZQ2f74qOfU

#RAW has never needed a "Wrap it Up Box" more than RIGHT NOW.#BigShowRuinsThings #StrowmanRuinsThings pic.twitter.com/2PCx8AfgkZ

They do “Big Guy Stuff:” thundering blows, clubbing each other in the corner. Eventually, the Big Show get the upperhand so…

The worst part about this is…this is somebody's first #RAW. Big Show vs. Braun Strowman is their main event.

The rest of the Wyatt Family attack the Big Show. The Ryback runs out to save Big Show!

Unless an actual titan from Attack On Titan is coming out right now, this was pointless. #RAW

The Wyatts take down The Ryback too. KANE emerges from the ring!

He rallies The Big Show and Ryback! A Kane/Big Show double chokeslam on Luke Harper! Together, they clear the ring of the Wyatt Family!

Kane, The Ryback and The Big Show: The Buffet Busters! #RAW