Welp. This is it. This is THE RAW. The Daniel Bryan Retirement RAW. Let’s rip off this band-aid, folks.

I totally just related to the girl in the blue who straight up ugly cried on Raw. She tries to hold it in so hard.

The entire night is a Daniel Bryan tribute night. Get your tear ducts ready. Ration your tissues.

Seriously though, the thought of never getting to see Daniel Bryan wrestle again is devastating.

Stephanie teases the Seattle crowd’s “DAN-IEL BRY-AN!” chants to bring out the main event of Fastlane – Dean Ambrose versus Roman Reigns versus Brock Lesnar  – to sign the contract and make it official. Then Stephanie quickly gets out of the way because…

No one cares, Stephanie! #RAW

am I meant to care about anything other than Daniel Bryan? please. #RAW

Brock Lesnar wastes no time taking this contract signing to its inevitable conclusion: violence! He uses Dean as a weapon to attack Roman. Then, he uses a table to attack Roman. THEN, he delivers an F5 to Dean Ambrose!

To be fair, contract signings make Brock Lesnar a little jumpy. Remember when The Undertaker stabbed him with a pen?!? #RAW #WWEFastLane

Anything in Brock Lesnar's hands is a weapon: A Pen, A Table, Dean Ambrose, ANYTHING! #RAW #WWEFastLane

Triple H appears to survey the carnage and scout his future Wrestlemania 32 opponent.

How am I not supposed to cheer Brock Lesnar. He’s the strongest, best man.

The video package highlights Daniel Bryan’s time in the original NXT. He faced Chris Jericho on his first night and made a name for himself in the WWE right away.

Here's a wee thing I made in 2013 pic.twitter.com/YLgedJZFLJ

What's the best tissue for drying up 3 hours of tears? Asking for a … oh, who are we kidding? #RAW #ThankYouDanielBryan

If You Have Time:

Ziggler and Owens face each other for the third week in a row. They keep trying to one-up each other. Ziggler put a sleeper hold on Owens that took them to the outside. Owens leveled Ziggler with a clothesline. Ziggler hit the fameasser from the ring apron. Owens delivered a sick Superkick! But it took a missed cannonball from Owens and assistance from the ring ropes for Ziggler to pick up the win.

Daniel Bryan wins his first title in the WWE, the United States Championship, from his NXT Pro, The Miz.

"Whenever Daniel Bryan's not on screen, all the other characters should be asking 'where's Daniel Bryan?'." #RAW pic.twitter.com/awH4qgaFGZ

Watch: The Usos and the Dudleys meet backstage (39:18)

The Dudleys heard there was Tables Match happening between the Usos and the The New Day. They want in.

D-Von… GET YOUR GLASSES! They're about to fall off! #RAW

Rest assured, the tables will turn… Ugh. Sorry, everybody. #RAW

Brie is busy being at the side of Daniel Bryan, so she couldn’t completed. Team Bella member Alicia Fox steps in to face Charlotte. Foxy lost.

Charlotte is a BEAST when things start clicking for her in the ring. #RAW

Miz's hoodie thingy is amazing so shut up Seattle.

Jericho turns The Miz’s Miz TV into Jerichos’ Highlight Reel, complete with changing the decor. Then the Miz and Jericho tease each other about their respective losses to AJ Styles. The Miz lost a tooth but Jericho insists that he is better than the Phenomenal One.

Sorry, Miz. Jay Leno did the same thing to Conan O'Brien with the Tonight Show. #RAW

Actually, now would be a great time to bring back MVP and the VIP Lounge… #BigThingsPoppinLittleThingsStoppin pic.twitter.com/NUAEkFYDhG

Having heard enough, AJ Styles decides the join the fray.

Still trips me out to see AJ Styles on #WWE #RAW

AJ Styles walks out like he's trying to find the lights in his house. #RAW pic.twitter.com/0c7jJTwA7F

This picture of Jericho and Styles is still surreal……….and AWESOME. #RAW

Daniel Bryan wins Money in the Bank and cashes in to win the World Heavyweight Championship!

Can The Rock give Daniel Bryan some of his like super-human powers and heal him? #RAW

The Ryback is no longer wearing singlets. He looks like a cross between Goldberg and Bluetista.

Who is this #WWE2K16 Create-A-Superstar and why is he facing Bray Wyatt? #RAW

ITS THE BIG GUY MAGGLE HAHA

Bray counters the Meathook clothesline into Sister Abigail. Then the Wyatts beat up The Ryback some more.

Don't sleep on Bray Wyatt! That Sister Abigail from out of nowhere! #RAW

Glad I got to see Bryan perform live in person and to witness this pic.twitter.com/4tqZjHo9No

The New Day are classic New Day, buffing, measuring and calculating before their Tables match but tonight’s about Daniel Bryan. Renee tells The New Day they need to find a partner because it’s now an 8 Man Tables match.

Roman Reigns on #RAW: I don't know about you-
Dean Ambrose: Now is not the time to sing Taylor Swift.

Roman Reigns wants to see Dean Ambrose get revenge of Brock Lesnar. He agrees to stat out of it because Dean wants to Brock Lesnar by himself.

"That fool hit me with a table" sounds WAY funnier than it should! #RAW

The Radical Mongoose beat the Gator!

Daniel Bryan defeats John Cena for the WWE Title! AND NOTHING ELSE HAPPENS

When are we gonna get to Daniel Bryan? #RAW pic.twitter.com/KNNfhGO5JH

Ambrose insults Lesnar every way he can think of. He says the F5 felt like an F2. He says that Paul Heyman is in charge of Brock Lesnar’s manhood. He says that Subway is better than Jimmy John’s. Finally, Lesnar comes to the ring and beats up on Ambrose. He delivers another F5 and walks away. Dean, pulling himself up from the apron, calls for another F5 from Lesnar. Reigns appears at the top of the ramp as Lesnar gets the ring. It gives Dean a chance to deliver a low blow to Lesnar before sliding out of the ring and crumbling onto the ring ramp.

Dean Ambrose with a low blow! He Stepped to Brock Lesnar! #RAW

Dean Ambrose got Brock right in the boingloins! #RAW pic.twitter.com/F0yeGpT2Dz

What the hell is up with wrestlers being obsessed with Brock's balls?

This is The Undertaker's fault. #SuplexCity is going to hit Death Valley real soon… #RAW

Tonight’s about Daniel Bryan after all. Sin Cara’s back, which is good but the League of Nations target Kalisto.

Sin Cara is back! Wrestlemania is saved! #RAW

Del Rio picks up the win and the momentum going into the United States Championship match at Fastlane.

Kalisto goes on a winning streak once Sin Cara is out of the picture. First match back with Sin Cara, Kalisto loses. Coincidence? #RAW

R-Truth and Goldust meet outside the Experience Music Project. Goldust is dressed like Jimi Hendrix and smashes a guitar aka “Little Jimmy.”

#RAW Legit shocked that R-Truth knows who Jimi Hendrix is.

"HAD A DREAM I…HAD A BABY! CAUSE THE DOG GON' PUSH EM ALL OUT THE WAAAAAAAAAAAAAAAYYYYYYYY!" #RAW

Sasha, while wearing Bayley Bands, walks to the ring to be on the commentary team for Becky Lynch versus Tamina.

The time that Daniel  Bryan and the WWE Universe “Occupy RAW” until Triple H agrees to face Daniel Bryan at Wrestlemania 30.

Daniel Bryan is one of the guys, along with Punk, AJ, and Christopher Daniels, who were the reasons I got into indy wrestling.

Sasha is scouting Becky Lynch before they team up to face Tamina and Naomi at Fastlane. Sasha calls herself the Beyoncé of Team B.A.D.

Sasha really was the Beyoncé of #teambad. That's legit.

Sasha is definitely the Beyoncé #RAW

She hit her so hard! #RAW

Damn! Naomi knocked the glasses off, the Boss knuckles, EVERYTHING! #RAW

I love Sasha Banks, but she just caught those hands from Naomi. #RAW

Becky slides out of the ring to deliver an exploder suplex to Naomi on the outside.

She walks back into the ring and directly into a superkick from Tamina. Tamina picks up the win.

Tamina kicked the Irish out of Becky Lynch

She hit her so hard! #RAW

The New Day saves the night 💜

There’s a lot to like about Mark Henry, but the best thing? Him not knowing the difference between a trombone and a trumpet.

2) Mark Henry dances to that New Day beat. Big E shows him how to get his hip wiggle on; Mark Henry drops it low!

Right now, Mark Henry's hand son is all like, "daaaaaad, you're embarrassing me!" #RAW

Hit em with that Hall of Pain, Mark. You know we ain't ready

The four of them take it to The Usos and the Dudleys, with Henry doing most of the heavy lifting. Then things go to far when The New Day instruct Mark to “get the tables!” That’s one command too many and Mark walks out.

Mark Henry gets mad at New Day wanting him to get the tables.
Dudleyz get mad about not being in the #TablesMatch. Veterans are not playin'.

With the numbers game in their favor, The Usos start delivering Superkick sandwiches long enough for The Dudleys to put Big E through a table.

So… The Dudleys won? Sorry. Completely confused by the rules of this #TablesMatch #RAW

The post match celebration turns ugly when The Dudleys attack their tag team partners. The Dudleys need to remind the Usos that they are The Dudleys, legends in wrestling and the originators of Table matches.

THAT was worth the wait! #RAW

To put an exclamation point on their statement, The Dudleys hit Jimmy Uso with  3D through a table!

See what happens when you team The Dudley Boyz with Flo-Rida? They snap. #RAW #TablesMatch

And The Dudleys powerbomb Jey Uso through another table!

Shocker the Dudleys turned heel on Usos. Raw has been amazing tonight 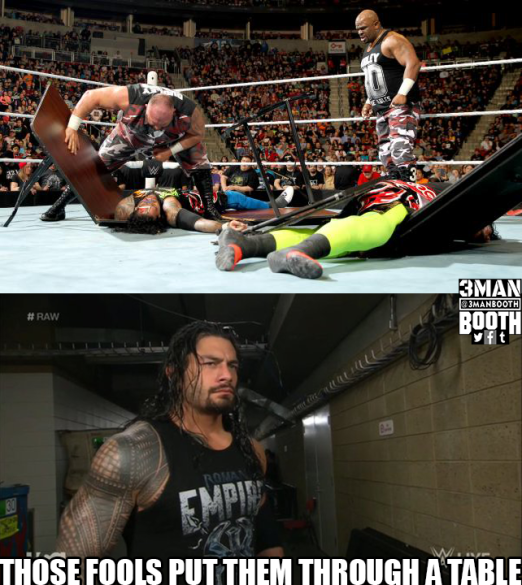 A compilation of Daniel Bryan’s career in the WWE is shown, leading up to his WWE World Heavyweight Championship win at Wrestlemania 30.

You don't have to be Bryan's fan to respect him.

#ThankYouDanielBryan for that magical realization of the industry's greatest, and most ELECTRIC payoff ever….. pic.twitter.com/ahKzpFhsrR

We can’t put this moment into words. We tried the first time.

So we’ll just point out 2 things:

Thank God Wendy's is open late. I'm going to need to emotional eat after this. #RAW

Ohmygod do we love you Daniel Bryan.

Guys, Daniel Bryan might be a better human being than The Rock. There's no shame in second place, Dwayne. #ThankYouDanielBryan #RAW

"That's why Brie says All the Time!"
Once you go Bryan, there's no point in Tryin'!#ThankYouDanielBryan #RAW

"That's what Brie says ALL THE TIME!" – Daniel Bryan on #RAW #ThankYouDanielBryan pic.twitter.com/gCmpmuaMzl

"I love hitting the ropes and diving. Right here. It makes me feel like Superman." #ThankYouDanielBryan #RAW pic.twitter.com/9z9pZ6Fk1Y

All of the feelings. So many tears. #ThankYouDanielBryan

What an awesome wrestler and human being…wish only the best for Daniel Bryan and his new life! #ThankYouDanielBryan for everything 💗

The good guys can win sometimes.

Thank You, Daniel. THANK. YOU. DANIEL.

Crying isn't something I do
Have few hrs to come up w/excuse why my eyes are swollen. May tell every1 I got into fight #ThankYouDanielBryan

I never met you but I love you, Daniel Bryan. #ThankYouDanielBryan

I'm grateful that I got to work alongside an all-time great, and long before that I was a fan first. Thanks for the memories @WWEDanielBryan

Thanks to Daniel Bryan my eye makeup found a new home pic.twitter.com/mJu0pEgg4O