As you know, So That Happened has been a staple for RAW and Total Divas Recaps over the past few years. Unfortunately, all good things must come to an end. At least on the RAW side of things. So, we present to you our NEW RAW Format: DVR is WAR.So grab your popcorn and enjoy!

The preferred way to watch Monday Night RAW is live with us on Twitter. But, if you saved it to your DVR and need to clear 3+ hours of space fast, we’re here to help.

Basically, Triple H is better than the entire WWE roster (We get it) and now needs to find an opponent for Wrestlemania 32. The Authority will decide the Fastlane main event – based on tonight’s matches – by the end of RAW.

If you have time:

Listen to Vince tell the Miami crowd to “Shut Up!” (4:05) before he and Stephanie introduce Triple H.

The ending of Dolph Ziggler and Kevin Owens (30:45)

You can watch the entire match. Neither Superstar ever disappoints. But Kevin Owens delivers a nasty suplex, Dolph Ziggler catches Owens with a Superkick out of nowhere

And Owens delivers a vicious Pop-Up Powerbomb to get the victory! Phew!

Kevin Owens did not point at the #Wrestlemania Sign! What a rebel! #RAW

Watch: The Rap Battle between Bo Dallas aka Bo Rida and Flo Rida (39:00)

"I have a full house like my name is Danny Tanner." – Bo Dallas on #RAW pic.twitter.com/XuBddAtagn

Skip: The Dudley Boys versus The Social Outcasts (Bo Dallas and Curtis Axel)

If you sit down a regular person & ask "who are the Social Outcasts?" I feel like they would say the 2 old dudes in camo & lens free glasses

The rapper in the Dudley Boyz theme is a better rapper than Flo Rida. #RAW

Watch AJ and Jericho briefly interact before the commercial break.

Catch your breath during the commercial break.

Then watch them wrestle!

That was fun. More matches like this please. #RAW

I still can't believe we got that match for free.

If you have time: Watch it again!

I don't know what Chris Jericho is so upset about. You can't be upset about losing to AJ Styles when you've already lost to Fandango. #RAW

I’m glad Charlotte is being a jerk to BOTH Sasha and Becky. Let the feud live on. #RAW pic.twitter.com/uvMdNytdoB

Goldust wants a ‘partner’ to tag with; R-Truth thinks he means something else. Yup.

That awkward moment when your next tag partner is similar to your ex tag partner #RAW pic.twitter.com/RdY7LNPEiz

No offense to Bray Wyatt and Kane but we’ve seen this match-up before. Also, the Miami crowd seems more interested in the guys cosplaying as Macho Man Randy Savage, Hulk Hogan, The Undertaker and The Rock sitting in the front row. Bray wins after The Wyatt Family interferes and he connects with Sister Abigail.

Kane and Bray Wyatt is like that #WWE2K16 Universe Mode Rivalry that just keeps popping up, no matter how many times you delete it.

The Authority might be more impressed with the Macho Man Randy Savage cosplayer in the front row. In their book, they wrote "It Factor" #RAW

You get the #LimoSwerve with The Miz, the surprise of The Rock driving into the arena. Then The Rock downgrades The Miz from must see WWE Superstar to Valet, makes The Big Show cry, ‘reminisces’ with Lana (and Rusev), wishes Pat Patterson a Happy Birthday all before heading to the ring to greet the Miami audience. It’s a magical transition from cocky jerk to beloved hero.

The New Day harness the Power of Positivity in order to go 3-on-1 with The Great One verbally. It’s bonkers. There are references galore!

THE ROCK DOESN'T EAT HIS BOOTY-O'S?!

The Rikishi bring up!!!!

#RAW Xavier "He did it…for the paycheck"

LLAMA PENISES ARE NOT PG.

Then the Usos come out and wrestling happens. Bottoms are Rocked, Spines are Busted, A Samoan Superkick Party breaks out and the most Electrifying Elbow in sports Entertainment is Dropped!

fuck, New Day made me laugh so much I had a coughing fit, goddamn y'all #RAW

Brilliant segment. One of the best I've seen in ages and then the Usos come out #RAW pic.twitter.com/WmKSVlt7pI

"Thank you, Miami! We will see you in Houston!" Did The Rock mean he and the Usos or was he using the Royal We? #RAW

Skip: Nattie and Paige versus Brie Bella and Alicia Fox

It’s hard to follow a segment that has The Rock AND The New Day in it. Nattie and Paige pick up the win after Paige hits the Rampaige on Brie Bella.

The Miz ripped off the least aerodynamic part of Kalisto's costume. He just made Kalisto faster! #RAW

The Miz hits one heck of a DDT on Kalisto. But Kalisto counters The Skull Crushing Finale – mid air – into The Salida Del Sol in order to get the victory!

Oooh, that sucks for The Miz! Skull Crushing Finale countered into the Salida del Sol That's awesome for Kalisto! #RAW

Who knew Miz would have such chemistry with Kalisto. Good match.

Skip: Roman Reigns and Dean Ambrose versus Sheamus and Rusev

Like Bray Wyatt and Kane, we have nothing against these guys. We just know that The Authority is coming out to make the big announcement after the match so this main event is like the road to the Fireworks Factory.

YOU KILLED @RusevBUL! YOU BASTARDS!

when you find out they never needed you for the powerbomb pic.twitter.com/ZK5OCU3zFZ 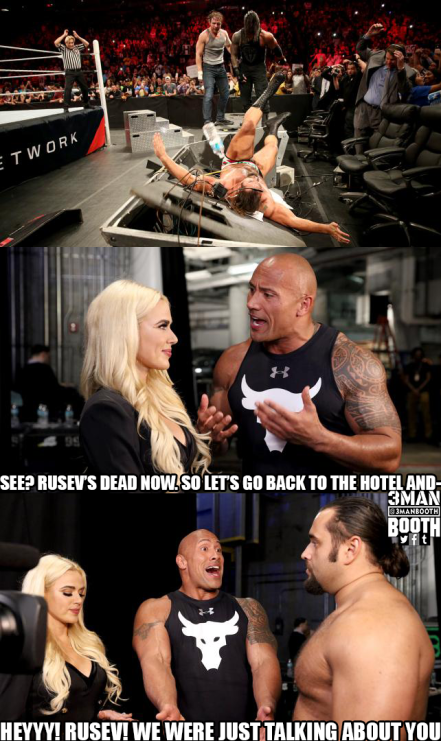 Stephanie comes out, impressed, and announces the main event for Fastlane: Roman Reigns versus Dean Ambrose versus Brock Lesnar! The winner faces Triple H at Wrestlemania 32!

"I must say, that was impressive. You murdered Rusev, EXACTLY what we were looking for!" – Stephanie McMahon #RAW

And brock didn't even have to show up/ compete in a match to show he's impressive. #wwelogic #raw

That’s it for DVR Is WAR. We’ll be back next week. And…