Posted on December 3, 2015 by keepitfivestar

A RAW without Cesaro isn't a RAW worth watching.

Well, regardless of no Cesaro, I’m sure there’s some good that happened. Possibly a new faction? Let’s find out what happened!

Kicking off with New Day? RAW going with the strong start.

FEEL THE POWAH!!! New Day to start Raw……I AM NOT SOUR 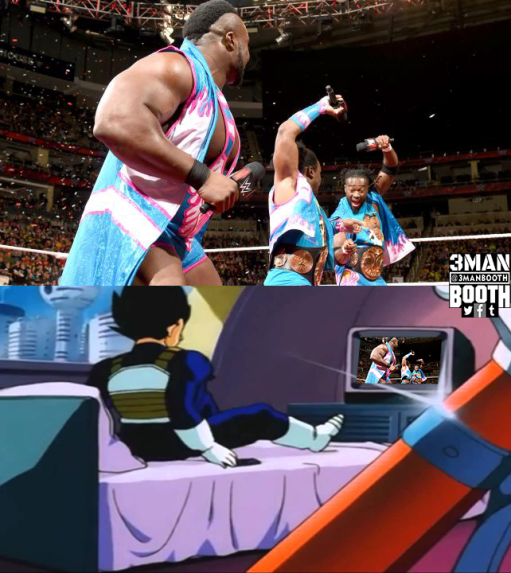 #ScumbagSheamus comes out wearing a suit.

Oh lord, don't use New Day to make me like Sheamus. Don't. How dare you. #RAW #RAWPittsburgh

#ScumbagSheamus brags about defeating Roman Reigns for the WWE World Heavyweight Title in 5 minutes and 15 seconds. The New Day also makes fun of Reigns, saying they weren’t even watching Reigns’ first WWE Title Reign, they were playing Street Fighter and preparing for Evo.

HAHA! New Day were busy playing Street Fighter when Roman Reigns won the WWE title. Tell you everything you need to know! #RAW

Somethings you can not unsee. Sheamus dancing is one of them. #RAW

That was fun. Gyrating Sheamus is awesome. #RAW

See what happens when you paraphrase Stone Cold Steve Austin, #ScumbagSheamus?!?! YOU GET SUPERMAN PUNCHED!!! #RAW

Roman Reigns takes the WWE World Heavyweight Championship with him.

Dean Ambrose's bad habit of stealing titles has rubbed off.

Triple H and Stephanie McMahon demand the title back. Reigns gives it back to Stephanie (Not Hunter), and tells “Magic Mowhawk” that he’ll see him at TLC. Triple H says #ScumbagSheamus wants to defend the WWE World Heavyweight Title tonight. Stephanie McMahon adds on that Reigns needs to win this match in 05:15 to win the Championship.

Whoa! Dolph Ziggler hit that Superkick square on the jaw of #PrincePretty! #RAW 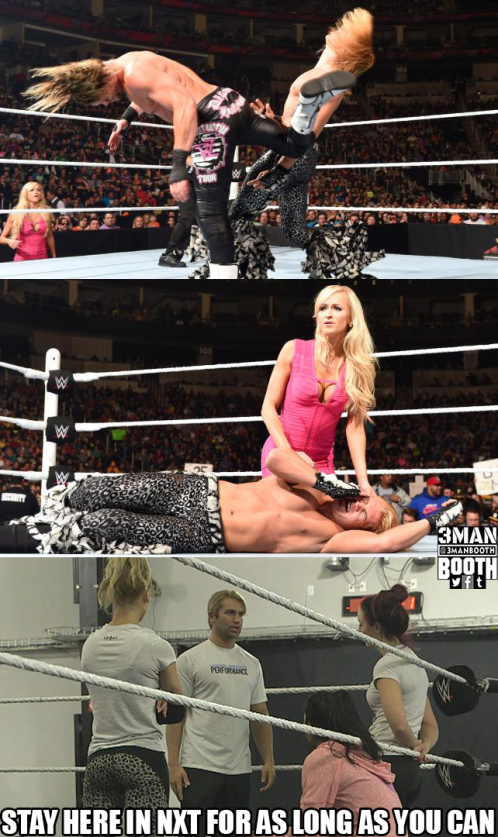 Rusev is on MizTV with The Miz. Rusev talks about being injured and how no one in the WWE Universe wanted him back or sent him get well cards. Rusev says the only one who cared was Lana.

I would've sent a Get Well Rusev card but all Hallmark had was "Get Well Rey Mysterio" cards. Tons of 'em. #RAW

So, if we sent Rusev the chocolates with the strawberries on top, Rusev and Lana wouldn't be engaged? Fellas, we messed up! #RAW

Rusev and Miz introduce the return of Rusev’s fiance, Lana.

Hey, Lana got her music back! #RAW

Lana talks about her love for Rusev, claiming she never went all the way with Dolph Ziggler. The WWE Universe disagrees and starts a “YES YOU DID” chant.

#RAW Lana: "For the record, I never went all the way with Dolph" | Pittsburgh Crowd: "YES YOU DID! YES YOU DID!"

Rusev also claims he didn’t go all the way with Summer Rae. The WWE Universe disagrees and starts a “YES YOU DID” chant.

I feel bad for Rusev. Let's send him some of those berries with the little chocolate on them. Or a fish. #RAW

Rusev and Lana are interrupted by The Ryback, who is here for Smashmouth (the band?) and wants a match.

"In Pittsburgh, we believe in Smash Mouth!" – The Ryback REALLY?!?! #RAW pic.twitter.com/gRvSrxmIGc

"The way Ryback is walking, he might as well be walking on the sun." #RAW

During the match, Rusev knocks Ryback into the steps. The steps knock into Lana, sending her down.

This is the best thing for everyone involved… except Lana. #RAW

Rusev carries the injured Lana to the back.

The Rusev may have lost the match but he still wins at LOVE!!! Take that, The Ryback! #RAW

Not gonna lie, I like this and want to see more Wyatts vs. Dudleys family feuding. Especially if guest stars are involved. #RAw

During the The Dudleyz vs. The Wyatt Family, Bray Wyatt ends up going through a table.

Bray through a table! #RAW

Like a #BlackFriday / #CyberMonday sale, WWE Bait and Switched us with The New Day and #ScumbagSheamus! #RAW

After another rant on the United States and MexAmerica, Alberto Del Rio and Zeb Colter make quick work of Goldust.

MexAmerica has a strict "No Weirdos" Policy, apparently. #RAW

Swagger does look a bit like a tall Macklemore. #RAW

PLEASE LET BECKY AND CHARLOTTE WRESTLE EACH OTHER?? #RAW

The Usos and The Lucha Dragons face off in a number one contenders match. As good as the match was, the main focus was The New Day on commentary.

"The Usos are my son's favorite. He's 2 so he doesn't know any better." – Kofi "MEGADAD of the Year" Kingston! #RAW

See, JBL? That's how YOU sound when you yell things like "Uso crazy" and "Millions Of Dollars" #RAW

The New Day cause a double disqualification, meaning The Usos and The Lucha Dragons DO NOT get a title shot at The New Day.

New Day are what keeps me breathing. #RAW

After Alicia Fox is taken out Sasha Banks defeats Brie Bella with the help of Team B.A.D.

Throughout the night, Triple H and Stephanie McMahon let Dean Ambrose and The Usos know that if Roman Reigns doesn’t win, they will not be getting their respective title shots against Kevin Owens and The New Day.

Stephanie and Triple H reached into their Parenting books to figure out how to punish Roman. "We're not hurting your friends; you are." #RAW

#ScumbagSheamus comes down to the ring with his new Sheamus 5:15 Shirt. So does #ScumbagSheamus think that Stone Cold Steve Austin beat Jake the Snake Roberts in 3 minutes and 16 seconds? #RAW

Roman Reigns almost beats #ScumbagSheamus in time, but he is attacked by Alberto Del Rio, King Barrett and Rusev.

Del Rio with the squad too??

#ScumbagSheamus announces the birth of the League of Nations, a group formed by #ScumbagSheamus, Alberto Del Rio, King Barrett and Rusev.

The League Of Nations is born on #RAW. I am a fan. #WWETitle pic.twitter.com/n2UMNKcwWX

Roman Reigns’ crew of The Usos and Dean Ambrose come to save him. The Main Event for tonight will be The League Of Nations vs. Roman and Friends.

Becky Lynch faces Charlotte next with Paige on commentary.

To all those fans on #RAW NOT cheering Becky Lynch? pic.twitter.com/oyGors310V

Throughout the match, Paige keeps getting criticized on commentary.

Byron Saxton's acting like he can't catch those hands from Paige. #RAW pic.twitter.com/pSVHG7SF1C

Charlotte suffers a knee injury during the match. Ric Flair distracts the ref, allowing Charlotte to spring up and roll up Becky Lynch for the win.

Becky: You cheated! Charlotte: I lured you in to letting your guard down. It's strategy! Becky: That's cheater talk! Cheater logic! #RAW

Adam Rose appears on the titantron and trashes Dolph Ziggler, Tyler Breeze and Summer Rae in a new segment. 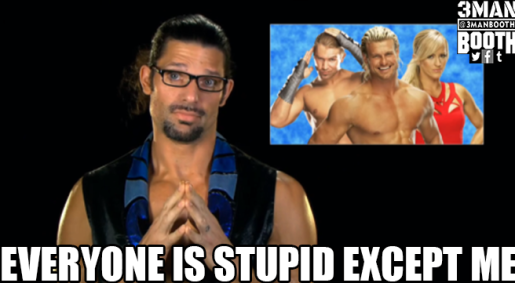 There needs to be one shot of Adam Rose walking backstage catching a Dolph Ziggler superkick out of nowhere! #RAW

Stardust tries another cosmic promo, but is once again interrupted by Titus O’Neil, who tried to get Stardust into the holiday spirit.

New Day's music hit and I was just like #RAW #rawpittsburgh pic.twitter.com/JYPyhcLCWK

The New Day is in the League of Nations? Ghana, Represent! #RAW

This RAW has been chock full of New Day. It's like they got the memo that people love New Day and that one of the few good things.

Throughout the match, The Usos are taken out.

Dean Ambrose gets the hot tag and tries to fend off The New Day and The League Of Nations.

Unfortunately for Roman and Friends, they are defeated when #ScumbagSheamus hits Dean Ambrose with a Brogue Kick.

Big win for the League of Unicorns! #RAW

The Usos proved on #RAW that they are the Yamcha and Krillin of WWE. 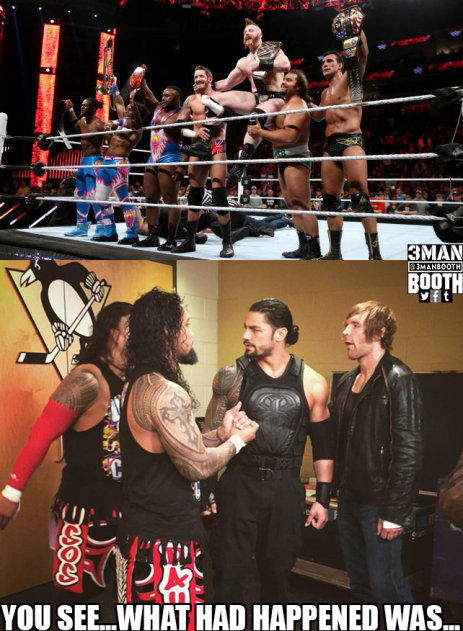 The League Of Nations and The New Day add insult to injury by beating down Roman Reigns and Dean Ambrose.

The real winner of #RAW is Rusev: The man who beat up so many minorities, now has minority friends and he's marrying a beautiful white woman

That’s it for this week’s RAW recap. See you next week and bring a friend!