Posted on September 10, 2015 by keepitfivestar

Seth, this was your last chance to wear your white angel gear before #LaborDay is over! #RAW

Seth Rollins thinks he’s special because of his Wrestlemania cash-in and victorious over Brock Lesnar and John Cena.

Seth Rollins starts bragging about his statue until he brings up Sting stealing it. A “We Want Sting” chant breaks out.

The more you boo, the more Seth Rollins is going to drag this out. Just hear him out, guys. #RAW

Seth Rollins brings up John Cena’s United States Championship challenge next, then talks about how he was trying to get out of the match, but then realized he was Seth “Freakin'” Rollins. And Seth Rollins always wins in the end.

Somebody just get Seth Rollins his own Amiibo and shut him up already. #RAW

Seth Rollins continues to brag, saying that he will put an end to Sting and John Cena, two Hall Of Famers, then get his statue back. Rollins is interrupted by Sting with the Seth Rollins statue. 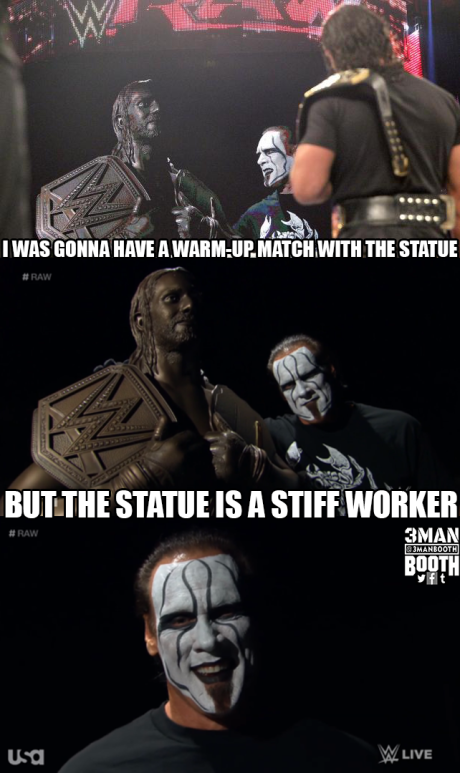 IT'S A PICTURE OF STING #RAW

Sting tells Seth Rollins if he wants the statue, he should come and get it.

Let's be real, if any one of us had a statue we'd treat it carefully too. #RAW

Sting playfully dusts the statue off.

Sting even coordinates his feather dusters. What a put together gentleman. #NOSELLSOCIETY #RAW

The Statue is Alive! #RAW

Such an ugly statue, tho.

So is Sting carrying the Statue with? Wouldn't that make him really easy to locate? Look for the facepainted freak hauling a crate. #RAW

Seth Rollins is interrupted by #ScumbagSheamus next.

"Don't bring my family into this!" LOL WHAT?!

So… the takeaway is that #ScumbagSheamus is part clown? #RAW

I'd actually like #ScumbagSheamus more if he had a bunch of free McDonald's Happy Meals in that Money In The Bank briefcase. #RAW

Backstage, Seth Rollins is trying to talk to Stephanie McMahon about Triple H, asking if he can has a plan. After Rollins realizes Triple H is behind right behind him.

Apparently when you say Triple H three times like Beetlejuice, he appears. #RAW

Seth Rollins wants to talk about a plan, but Triple H thinks he’s the man and can handle it. Triple H wants Seth Rollins to focus less on #ScumbagSheamus (who has to face Randy Orton tonight) and the statue and focus on his two matches tonight.

Seth Rollins has to face Ryback, then he has to team with New Day to face The Prime Time Players and John Cena.

Paige vs. Sasha Banks is up first!

Sasha Banks hits the Knees in the Turnbuckle on Paige.

That's messed up Sasha and Naomi! You left Tamina to take all the impact from Paige's Cannonball! #RAW #PaigeversusSasha

As expected, it’s a good match between Paige and Sasha Banks.

A THIS IS AWESOME CHANT! #RAW #DivaRevolution

But Sasha Banks gets the win after a distraction from Naomi.

The ref may not have called the DQ but that's pretty suspect, Sasha! That's all we're saying… #RAW

The Ascension is up next.

#RAW aw crap who let the Ascension in the arena?

Their opponents are Roman Reigns and Dean Ambrose.

Its The Shield Entrance! #RAW

*To the tune of Roman Reigns' theme* DEAN AND RO-MAN! ARE-THE. BEST. FRIENDS! DEAN AND, RO-MAN! BEST FRIENDS. TO THE END! #RAW

I got $100 on The Ascension winning. Who wants some of this action?! The Ascension are about to be sacrificed at the Altar of the Bad Dudes. #RAW #TeamAmBros

If Roman and Dean wrestled like that all the time, they wouldn't need a third man. #RAW

"The Apocalypse waits for you at Night of Champions." DO NOT ACCEPT THAT EVITE! #RAW

#RAW Seriously, Braun Strowman's Plan B job should be a voice actor in case his time as a wrestler runs out.

Backstage, Renee Young speaks to Ryback about his match tonight against Seth Rollins. Ryback wants to be a Fighting Champion, unlike Seth Rollins, who he calls a weasel. Ryback says Rollins is the Man and Architect but Ryback is the Big Guy with some plans of his own.

Did Ryback do a book report on Seth Rollins before the match or something? #RAW

Ryback pantomimes a Meathook Clothesline then a Shell Shock.

WHY ARE YOU GIVING AWAY YOUR MATCH STRATEGY, THE RYBACK!?!?! #RAW

Did Ryback also take an improv class before his match against Seth Rollins tonight? #RAW

Kevin Owens walks up eating an apple to wish Ryback luck on his match.

Ryback thinks Owens is full of crap, but Owens tells Ryback not to bite off more than he can chew.

Waiting for something to happen in the background of The Ryback's interview. #RAW

Kevin Owens is the second coolest person to eat an apple on #RAW. The first? pic.twitter.com/4N1BzBEKGv

Before Ryback vs. Seth Rollins, Ryback gives the Intercontinental Title to a Make-A-Wish child.

After a competitive match between Seth Rollins and Ryback, appearing on the titantron with Seth Rollins’ statue.

Ryback gets the win after a small package due to Sting’s interference.

The Ryback won! With the largest small package / cradle / roll-up ever! #RAW

Really Ryback? a roll up?

After the match, Sting appears on the titantron with the statue again.

On the real though, that Rollins statue is kinda scary…but I want it! #RAW

Sting puts the mask on the statue, making Seth Rollins freak out.

"NOOOOOOOOOOOO! NOT A MASK YOU CAN EASILY TAKE OFF! EVERYONE KNOWS THAT CAUSES PERMANENT DAMAGE TO STATUTES!" – Seth Rollins #RAW

Seth Rollins continues to call out Sting backstage, until he is interrupted by his partners, The New Day. The New Day tries to encourage Seth Rollins, with rhyming and a trumpet (Which Xavier Woods plays the Final Fantasy Victory Fanfare on) but Rollins is in no mood to deal with The New Day’s antics.

The New Day comes straight out of an anime. #RAW

After Seth Rollins yells at The New Day, he is confronted by Edge and Christian.

Edge and Christian recall the last time they saw Rollins cheapshotting them. Edge and Christian challenge Rollins to fight tonight since he didn’t get the job done. Rollins decides to storm off instead because he has a lot on his plate.

BRING OUT THE KAZOOS

Edge and Christian battle back with “New Day Sucks” the Kazoo Version.

These are adults. #RAW

Big E snatches the kazoo from Christian then eats it.

The Dudley Boyz come to Edge and Christian’s aid. 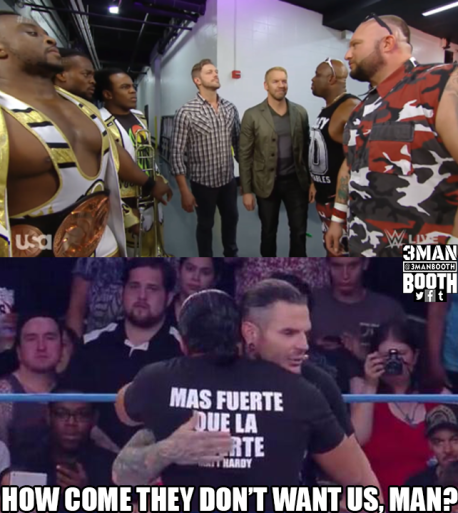 I wanted the Dudz and E&C to see each other backstage and I got it.

They put the Dudleys in camo but they didn't put Edge and Christian in blouses? HALF ASSED!

The Dudley Boyz let The New Day know that next week, the Prime Time Players have a rematch for the Tag Team Championships and the winners face The Dudleyz at Night Of Champions. Before The New Day leaves, The Dudleyz and Edge and Christian perform, “Get The Tables” to the tune of “New Day Rocks/Sucks.”

That was pretty awesome. #RAW

That backstage segment was everything I didn't know I want.

From now until NOC Seth Rollins needs lessons on Positivity from the New Day #Raw pic.twitter.com/yYVgnz0FOV

Summer Rae calls this the past week the most horrific week of her life, and brings up Rusev, calling him the true victim of the situation. Summer calls out Rusev to give him an apology.

*Does the Nae Nae to Rusev's music* #RAW

"I thought she was 'cool for the Summer.' No?" – Rejected Dolph Ziggler lines. #RAW

After Rusev comes down to the ring, Summer Rae calls Rusev a beacon of hope and a guiding light. Summer says Rusev give her the strength and courage to pose for Ironman Magazine. Summer blames the whole situation on Dolph Ziggler, and begins to cry while praising Rusev and asking for forgiveness.

"You've been my guiding light, my beam of hope, my Summer Ray?" – Summer Rae #RAW

Kinda hoping that they break up. Sad Rusev is the best Rusev. #Broodsev #RAW

Rusev wipes Summer Rae’s lipstick off, then forgives her for “betrayded” him. Summer Rae thanks “Ru Ru” for understanding.

He wiped her lipstick away. He's such a gentlemen.

"It's not your fault babe, it's the other persons" Welp.

WELL THANK CHRIST that Rusev & Summer Rae are sticking together. I dunno who would've got custody of poor Dog Ziggler. #RAW

Dolph Ziggler interrupts, letting Rusev know Lana is fine and that he and Lana are stronger than ever. Rusev and Dolph Ziggler argue about Lana, then Ziggler says he was told to give Rusev a message from Lana. The message is a superkick.