Posted on July 9, 2015 by keepitfivestar

#TotalDivas New Divas Names Font! and Alicia is stirring it up!

Return Of The Bellas?

Total Divas Returns and immediately, conversation is brought up at brunch about The Bella Twins possibly leaving the WWE.

The Divas are already planning life without the Bella Twins, which upsets Nikki Bella since she is not leaving the WWE any time soon. 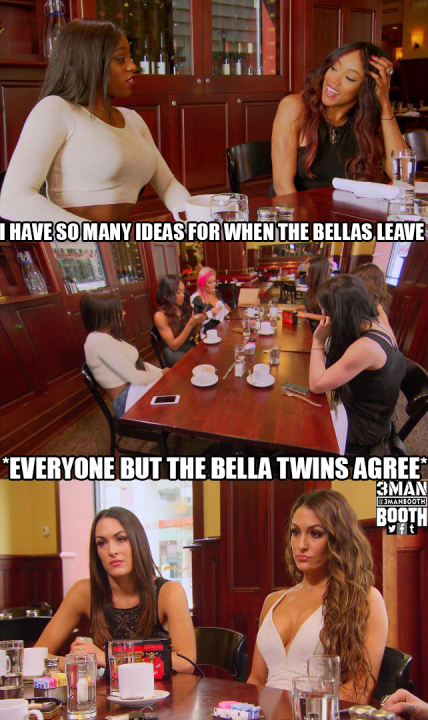 Lol! The girls are automatically assuming that Nicole and Brie are just out the door. #TotalDivas

"You and I are in the top spot." TRUTH #TotalDivas

Nicole is ready for a showdown to begin for the rest of the divas to TRY and take her top spot! #TotalDivas

After having a conversation with her Mother Kathy about her future, Nikki Bella talks to Brie Bella in the gym, thinking that this isn’t the time to walk away from WWE. Brie reminds Nikki that they already told everyone that they were leaving. Nikki tells Brie they have the potential to be the next John Cena, and that they can retire at 34. Brie says that what’s right for Nikki isn’t right for Brie. Nikki tries to convince Brie Bella, but Brie walks away not interested.

Nikki is already like the female John Cena, let's be honest 😜 @BellaTwins #TotalDivas

On the RAW before Wrestlemania, Nikki Bella wrestles Paige. Nikki is concerned about Brie Bella possibly not resigning with WWE. After the match, Nikki Bella reveals to the Divas that she wants to stay. The WWE Divas are happy, but Brie Bella still plans on leaving WWE.

Nikki's Staying and Brie's Leaving? Is this the end of the Bella Empire? #TotalDivas #TotesDivs

So we've got Nikki Bella for another 3 years. #TotalDivas

"There is no place I'd rather be" Ah Nikki I LOVE hearing you say that! @BellaTwins #TotalDivas #BellaArmy

Look at Mark getting uncomfortable at the prospect at having an adult conversation. #TotalDivas

Naomi, Jimmy Uso and Natalya go to a sex shop. Nattie is trying hard to study for this role.

Natalya picks out a toy, which she wants for her cats. The owner whispers to Nattie that she is holding a butt plug.

Nattie I don't think your cat will like that #TotalDivas

"I want this for my cat" DEAD DYING BUTTPLUG 😂 #TotalDivas

Nattie's "research" has her confusing a cat toy with a butt plug. More research is needed, Nattie. #TotalDivas #TotesDivs

Did Nattie tell Tyson who she was inviting over? #TotalDivas

Natalya and Tyson Kidd start talking with Athena. Athena tells Tyson to sit down like a cat. Athena demands Tyson do it, but Tyson isn’t very willing.

#TotalDivas stop being such a bottom TJ

Athena tells Natalya to spank Tyson Kidd , but Tyson Kidd is not into it at all.

Yooo you gotta get his consent before you start whipping him in the middle of the living room Nattie. #TotalDivas

Tyson Kidd gets up, walks to his car and leaves.

Tyson Kidd screams that he’s a tag team Champion and doesn’t want to purr like a cat.

"I'm a Tag Team Champion! I'm not purring like a cat" – TJ Terry Taylor said the same thing when they asked him to be a rooster #TotalDivas

Eva can act?! WHAT #TotalDivas

Push Eva to a Bella level… EXCUSE ME. mark has to be kidding. This is a joke right. #TotalDivas

Eva Marie is seen training with The Brian Kendrick. Eva reveals she and Jonathan are in a much better place since their last argument. The Brian Kendrick tells Eva Marie that they’ll be here for several hours, days and weeks, training. Eva and Kendrick continue to run through drills.

They gave Eva Marie to Brian Kendrick because he's The Man with a Plan. #TotalDivas #TotesDivs pic.twitter.com/jIgZgRFQVS

Later, Natalya reveals to the Total Divas that Eva Marie is having her own private coach in California to become better. Brie Bella is pissed that Eva lied to her about going down to the Performance Center. Naomi reminds everyone that despite her amazing trainer, Eva still has to prove herself.

"None of us got private coaches." – Nattie, daughter of JIM NEIDHART, niece of BRET HART, granddaughter of STU HART #TotalDivas

I can totally understand the divas anger towards Eva. I'd be just as angry #payyourdues #totaldivas

Nikki Bella talks about her determination of her WWE Career, saying she has given up her personal life for the WWE. Brie doesn’t think Eva Marie respects them. Paige is frustrated because Eva has had the easiest Divas career she has ever witnessed because she has been wrestling for 10 years and Eva actually gets to go home every night.

#TotalDivas STILL TO COME: Paige puts Eva Marie in the Bottom 3 only to realize that this isn't #ToughEnough

Backstage, The Bella Twins are talking with Mark Carrano, asking about the Eva Marie rumors. Carrano tries to call out the gossip, but Nikki asks Carrano about the truth. Carrano reveals they have other plans for Eva Marie.

#TotalDivas Nikki: "It's like high school around here, there's gossip" | Thaaaaaat's the problem.

I don’t think Eva has a choice where to train ? Doesn't management tell you what to do #TotalDivas

Eva Marie is being tended to by Jonathan, as she has many bruises from training. Jonathan thinks Brian Kendrick is dope and will help Eva gets where she wants.

#TotalDivas "This guy is dope" -Jonathan's 2¢ on THE Brian Kendrick.

#TotalDivas The Brian Kendrick is a believer in the Power of Positivity? Hard to understand why he wouldn't fit in "The New Day"

Alicia thinks Eva has no credibility, but Naomi chimes in saying that if WWE wants Eva, they will use Eva. Naomi thinks complaining won’t help. Naomi starts to defend Eva Marie, saying the Divas talking behind her back isn’t good. Alicia gets defensive and tells Naomi to call Eva and tell her. Alicia claims they’re not talking sh*t about Eva. They’re comparing notes.

"It's not called talking shit, it's called comparing notes" – @AliciaFoxy HAHAHAAAAAAA!! So many people will be using that one. #TotalDivas

Naomi is always the voice of reason on #TotalDivas. We missed you! #TotesDivs

This is why I love Naomi #TotalDivas

Back at training, The Brian Kendrick teaches Eva Marie how to leapfrog. Eva is bruised and hesitant. Eva can’t get the leapfrog together.

The Brian Kendrick tells Eva Marie to take a walk and figure out if she wants to do this.Outside, Eva Marie reveals that she is frustrated that she has not picked it up in 6 days. Jonathan reminds Eva Marie that The Rock didn’t pick this up in Day 1 either.

The Rock did pick it up day one. In fact he's Samoan, he never had to pick it up, it was embedded. #TotalDivas

Eva Marie agrees and refuses to let the Energy Vampires bring her down. Eva tries to practice with The Brian Kendrick, but can’t get the leapfrog down. After a few times, Eva Marie hits Kenrdick with a leapfrog, hiptoss and bodyslam.

Eva Marie, we're happy for your new-found focus but please don't use the phrase "energy vampires" ever again. #TotalDivas #TotesDivs

That may have been the best Eva Marie "match" ever. #TotalDivas

#TotalDivas "Eva can go fuck off" -Brie Bella channeling the vibes from the IWC.

You really shouldn't tick off Brie. I think #TotalDivas has taught us that 😜 @BellaTwins #briemode

When Eva Marie shows up at RAW, Brie Bella talks to Eva about the situation. Brie lets Eva know that if she asks for the Divas opinions, they will tell her straight to Eva’s face.

#TotalDivas This whole Divas vs Eva Marie is stemming off of possible misinformation from Brie which is hi-larious.

Eva should just tell everyone she's working with The Brian Kendrick. That'll calm em down. #TotalDivas

Eva Marie runs into Cameron. Eva asks Cameron for help, but Cameron decides to be Cameron and leave.

Brie Bella, Nikki Bella and Paige confront Eva about her Instagram photo and talking behind their back. Paige says they would say the same thing to Eva Marie’s face. Naomi tries to keep the peace, but it’s not working.

Alicia Fox says that she is not going waste her time on Eva Marie. Paige thinks it’s ridiculous that Eva doesn’t have to go to NXT and that she has her own personal trainer. Eva says being a WWE Diva is about empowering women and calls the Divas out on cutting her down. Brie gets even angrier, saying that WWE is everyone else’s life. Brie thinks Eva doesn’t give a sh*t about wrestling.

#TotalDivas Brie: "No Eva Marie you're tearing down our division because you suck at wrestling" | L-O-L.

#TotalDivas Brie "you absolutely suck at wrestling"…Eva Marie's career, in a nutshell

"No Eva Marie, you are tearing down our division because you absolutely suck at wrestling." -Brie Bella / the wwe universe. #TotalDivas

Damn these women are being vicious to Eva Marie when they should be mad at their company for giving her special treatment. #TotalDivas

This Season On Total Divas:

#TotalDivas Jonathan: "Your signature move doesn't have to be Eva Dies" | *Shot of Eva being carted into an ambulance via stretcher*