John Cena vs JTG is up next.

John Cena starts to hype Extreme Rules and his match with Rusev. Cena gets cut off with a Cena Sucks Chant. Cena says Rusev brought a few fans with him, but he knows those fans cringe every time he says “The Champ Is Here.”

Is John going to Talk and Fight too? Or is he going to waste our time twice by talking, THEN fighting? #RAW

John Cena starts to hype the Russian Chain Match against Rusev, and explains the rules where the winner touches all 4 corners successfully. Cena says Rusev’s plan is to take the fighting spirit away from Cena. Cena says he will never give up and fight to win.

I wish Orton would've RKO'ed Cena while he was trying on his wristbands or something backstage.

Cena says Rusev’s plan is to beat him motionless, and prove that Wrestlemania is a fluke, but Rusev forgot that he’s John Cena and if you knock Cena down, he gets back up. Cena says he will lock Rusev to the chain, beat the crap out of Rusev, hit all four corners and prove that Wrestlemania wasn’t a fluke and was a statement. Cena says the Champ Is Here and the United States Championship is a symbol of opportunity and this Sunday, Rusev has the opportunity to get a Russian Steel Chain shoved straight up his ass. 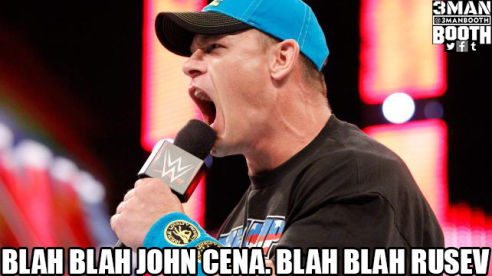 John Cena brings up the United States Open Challenge, saying he is still having a fight. Cena tells his upcoming challenge that he’s focused on the match of his life and is not in a losing mood. Cena hypes Albany as the place to be, himself as the man to beat, then waits for his challenge to accept.

Cena is doing exactly what I was hoping with the U.S. Title. #raw #nosellsociety

Kane for US champion! *ducks all the trash everyone throws at him*

Any man that can wrestle in dress slacks and Florsheims is a man I can respect.

John Cena goes for the You Can’t See Me, but Kane grabs him by the throat.

Do Not Mess With the Guardian of the Gate, Cena! #RAW

After a Chokeslam, Kane goes for the Tombstone, but John Cena counters with the AA.

H with that disappointed dad look

If Miz loses the Miz brand, he could just always come back as the Calgary kid

The Miz tries to hype The Marine 4, but Renee Young cuts Miz off, letting him know that Byron Saxton is backstage speaking to John Cena. Miz is pissed off.

The Miz being preempted by John Cena. Nothing's changed… #RAW

In 25 years Cassandra Mizanin will have the same gimmick in the WWE. #RAW #MortalKombatX

"Expect the unexpected!" Unexpectedly gets hit from behind.

I don't like Rusev, but thank you for shutting Cena up. P.S. The chain is unnecessary #Raw

Maybe we'll try NOT shouting "The CHAMP IS HERE!" in dimly lit places backstage where we can be easily attacked from behind, huh Cena? #RAW

Rusev locks John Cena in the accolade with the chain.

Match 07: Damien Mizdow vs. The Miz (Winner gets The Miz Brand)

The Miz versus Damien Mizdow: The Brand Split of 2015. #RAW

Now THAT is someone who should wear jorts. Not Cena.

Can't wait for Miz to have to go by only "Mike."

It's fine if Damien loses "The Miz brand." He can always go back to being Magneto or Davy Crockett. #RAW

Damien Mizdow hits the DDT on The Miz.

I really want Sandow to wrestle the whole match with the sunglasses on. Idk why

Summer Rae really cares about this whole mess a lot and has made herself an integral part of it all. Mad props to her for it.

The Miz hits the Skull Crushing Finale on Damien Mizdow.

That finish was a Mizcarriage of justice. #RAW

Post-Match, The Miz says it’s only fitting that he says this one more time. Miz tries to go for his “I’m The Miz” catchphrase, but gets hit with an RKO.

Randy, where ya been? #RAW

Randy Orton RKOs have been saving the show all night

Randy Orton giving Summer Rae an RKO would've been the icing on the cake . #Raw #WWE

Bray Wyatt asks what motivates a man to do the things they do. Wyatt asks if it’s money, power or respect, then says it’s a combination of all 3 for most men. Wyatt says this person is different just like him, but it’s fear that can motivate him. Wyatt says you can lift all the weights in the world but you can’t lift your personal failures. Wyatt says that weight will suffocate and blind this person until the only thing that person sees if his face looking down on him.

Is Bray Wyatt talking about The Ryback? After Cena and Orton, Is Bray going for an attainable victory? #RAW

Bray Wyatt tells this person that there will be a moment where all that person’s hard work will mean nothing and that person will fade away.

"All you hard work, failures, etc." Definitely sounds like a Bray feud with Reigns. #RAW

Adam Rose is wearing his black striped tights. It's as an homage to Virgil (h/t @KeepItFiveStar) and funeral wear for his career. #RAW

Ryback takes out a Hot Dog and Banana in the Rosebuds.

Ryback yelling out "IT'S FUNNY CAUSE IT'S FOOD" before double shellshocking those two guys, that's phenomenal. #RAW

Ryback asks What Did The Banana say to the Hot Dog? Ryback says “Nothing because their asses just got shell shocked.” Rosa Mendes checks on Adam Rose.

#RAW Ryback: "What did the Banana say to the Hot Dog?" | JBL: "What?" | Ryback: "Nothing cause their asses got shellshocked" #WompWomp

The Ryback was not a fan of Wacky Deli. #RAW pic.twitter.com/iCJkXvlhbj

Backstage: Renee Young asks Kane about his “rollercoaster night” tonight, then asks how he feels what was said about him on social media following his loss. Renee mentions the denture cream/box of depends joke Seth Rollins made at Kane’s expense.

So is Kane a victim of cyber bullying? #RAW

Kane storms into The Authority’s office then yells about the joke. Seth Rollins asks how Kane even heard about that since it was supposed to be a private conversation. Everyone slowly turns to Jamie Noble, who looks away.

Kane tells Seth Rollins that he’s here now so say it to his face. Seth Rollins and Kane argue until Rollins screams he’s sorry. Rollin tells Kane that this Orton thing has gotten him on edge. Rollins tells Kane that he knows he helped him win the MITB Contract, but it’s really embarassing when Kane entions it over and over again. Rollins tells Kane that he knows he’s done what he can to help stay on top and that he really appreciates it. Rollins appreciates it so much that he promises to dedicate his match against Dolph Ziggler to Kane. Rollins says Kane is the bigger man literally and figuratively. As Rollins walks off, Randy Orton watches him.

You know I can get behind this whole RKO Stalker thing.