RAW begins with the cage lowering.

Is the cage only symbolic or are we actually getting a cage match right now? #WWE #RAW

Randy Orton comes down to the ring and gets in the cage. Randy Orton says for someone who prides themselves on being the smartest person in the room, Seth Rollins is a dumb bastard.

Banning the RKO just means that Randy Orton needs to use another move of doom. Unlike Cena, Randy never told us how many he has. #RAW

Randy Orton says using the RKO would be too easy and he wants to make it slow and agonizingly painful for Seth Rollins. Orton vows to break Seth Rollins jaw because he people don’t have to hear him talk. Orton wants to break Seth Rollins ribs, then says he’s going to pick up Rollins by the blonde strand of his hair and throw him into the stage until every bone in his body is aching and Rollins’ skin is on fire. Orton says once the beating ends, so will Rollins’ reign as WWE World Heavyweight Champion. 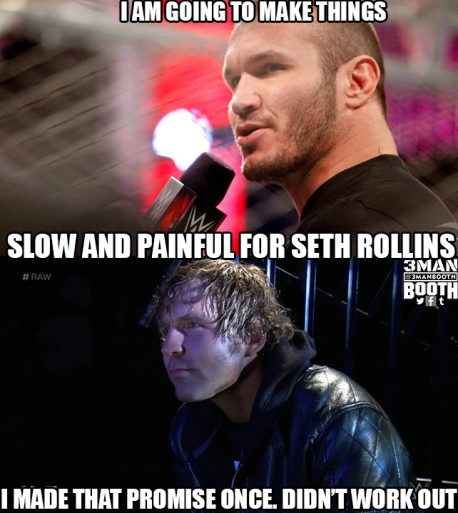 "Oh no! not my blonde streak… is what the kids would say!" – Seth Rollins #RAW

The RKO is banned, but the Diamond Cutter isn't. Think about that! #wwe #raw

Seth Rollins comes out with J & J Security. Seth Rollins says Randy Orton has an anger problem, but Orton says he has a Seth Rollins problem. Rollins mocks Orton’s threats, then gets a “You Sold Out Chant.”

Randy Orton has issues with his anger. And his pants. He's really angry at his pants. #RAW

Seth Rollins says he’s on the path of becoming the greatest World Champion of all time because he can outmaneuver and outsmart everyone. Rollins calls himself the best and says he has the title to prove it. Rollins says as good as Orton is, Rollins is much better. Rollins tells Orton that he will not be walking out as WWE World Heavyweight Champion and that’s a promise.

Seth Rollins just treated Randy Orton's promo like it was a temper tantrum. Because it kinda was. #RAW

"I'm so mad at you, Seth Rollins, that I'm going to attack everyone that isn't involved with any of this!" – Orton #RAW

Everyone hide your wives, hide your husbands, and hide your kids! Orton is going to RKO everyone he sees! #Raw

get it all outta my system just got clipped out, sampled and paired with a trap beat. I smell grammy for #DaGawdRandyOrton

Dean Ambrose had to wear his Dean Ambrose shirt just to tell himself apart from Luke Harper. #RAW

Luke Harper tells Dean Ambrose he doesn’t know why Ambrose isn’t afraid of him, but after tonight, Ambrose will be.

Dean gets the weirdest feuds. I honestly thought they were fighting over their wardrobe.

Ambrose wasted no time with that dive to the outside, now we've got a brawl in the crowd here! -BDaMan

Dean Ambrose and Luke Harper brawl on the outside.

This Harper versus Ambrose match just became a donnybrook! #RAW

Can we please call this the "Tank Top Series" when referring to this amazing feud in ten years? #raw #nosellsociety

Ambrose with some sort of boomerang clothesline!

Ambrose has one of the best clothesline variations I've ever seen. #Raw

Never take your eyes of Dean Ambrose! He'll hit you with a clothesline for your troubles! #RAW

I’m glad they played Ambrose’s music or I wouldn’t have been sure that match ended. #WWE #RAW

Backstage: Seth Rollins is looking around concerned until Titus O’Neil scares him with the barking.

lmao Titus, that was great

Primetime Players might be the best hidden secret WWE has going on right now. #RAW

As The Prime Time Players walk off, Seth Rollins notices a crew member laughing at him. Rollins threatens the crew guy and says he’ll wipe the floor with the next person he sees. Rollins bumps into Triple H. Rollins changes his tune and asks Triple H about Kane. Triple H says he will address Kane when Kane arrives. Rollins mentions Randy Orton and requests more security, but Triple H tells Rollins that Randy Orton is only “one guy” then walks off.

If Rollins wanted more security he should’ve used numbers and characters in his password. #WWE #RAW

Match 02: The Lucha Dragons vs. The New Day (Number One Contender’s Match)

Is it just me or does New Day dress like school crossing guards? #RAW

Big E yelling "No! No! No!" while straight muscling Kalisto is pretty pectacular. #RAW

Shot. Kalisto is everything.

Does Kofi have pigtails? #Rawlbany

What are you doing with the pigtails, Kofi?

Xavier Woods holds Sin Cara’s feet allowing Kofi Kingston to get back in the ring.

PHD! Dr. Woods is a genius!

Now that's one way to win

Lol..Xavier Woods. New Day does something good for once.

C'mon, Randy! haven't you done enough to Kofi Kingston over the years! #RAW

Technically, those RKOs are justified by Karma. #RAW

Randy Orton can't clap / chant on beat. That's why he RKO'd New Day instead of just saying they suck. #RAW

I would love it if Orton caught up with Big E backstage to give him an RKO. No one escapes from the RKO! #wwe #raw

Can Curtis Axel have a new gimmick as Fandango's protege? And Fandango teaches Axel all he knows about dancing?

Curtis Axel does the Alex Wright.

Curtis Axel just did the Alex Wright! #Axelmania is all in the hips! #RAW

Axel mania vs Fandango. This is Wrestling Challenge match.

To the guy in production. Just delete "Fandango 2.mp3" #RAW

The right music starts to play.