Guess London isn't the best place to be the UNITED STATES champion… or John Cena. #RAW

John Cena says do not adjust the volume of your TV set because RAW is in London and London is loud. Cena says unfortunately for him there are times where London and him don’t get along.

"It's no secret that London & I don't get along." – Cena on his long feud with Brenda "London Tipton" Song #RAW pic.twitter.com/swjigLwGaA

John Cena looks even more like a Tourist with his USA inspired t-shirt. #RAW

John Cena talks about how great the London crowd is and how much they deserve a Wrestlemania.

"I think London deserves a Wrestlemania" Way to win the crowd over, John Cena. #RAW

John Cena says the powers that be want London to wait and compares it to Rusev waiting for Extreme Rules for his title shot. Cena says he doesn’t want to wait and wants to fight right now. Cena challenges someone to come out and face him for the United States Championship.

John Cena should never not be hosting open challenges. #STRAIGHTSHOOT

Bad News Barrett gets a loud “Thank You Barrett/Let’s Go Barrett chant from the fans.

#ThankYouBarrett for those abs. #RAW

Bad News Barrett tells John Cena that for once he agrees with him. Barrett says why should he wait to beat Daniel Bryan for the Intercontinental Championship at Extreme Rules, when he can beat John Cena right now for the United States Championship in the greatest nation of the world, England.

Ohmygod the accent in all the chants tonight! Super cute!! #RAW #british

I have a weakness for British accents. So this Raw is gonna be brutal on me.

Maybe I'm alone but I like Cena as the U.S. Champ, he's been defending it every week which is a big point in my opinion.

You know who never got the Hometown Advantage? Papa Shango. WWE never does any shows in Parts Unknown. #RAW

BNB busting out a Cactus Elbow! LOVE IT! #RAW

#WWELondon #WWE I heard of a Tornado DDT, but a Tornado Suplex? Epic. #RAW

Barrett with The Wasteland! #RAW

Bad News Barrett goes for the Bullhammer, but John Cena hits him with the AA.

Oh Thank God! Barrett kicked out of that AA! #RAW

can someone explain how barrett turning the armpad inside out makes the bullhammer effective? #RAW

John Cena catches Bad News Barrett with the Springboard Stunner into the AA.

Cena: *Hits the Springboard Stunner* Barrett: Ow…that was a minor inconvenience-*Gets lifted up for the AA* Oh, bollocks! *Gets AA'd* #RAW

What a great match between Cena & Wade.

I hope that Cena keeps the U.S. Title Open Challenge going through at least his first term as president. #STRAIGHTSHOOT

*Does the Nae Nae to Rusev's music* #RAW

Lana brings up John Cena out on calling out Rusev for waiting. A loud Lana Chant breaks out.

Move over Rusev, Lana is the real star here 😍 #RAW

After a loud Lana chant, Rusev attacks John Cena with a chain.

RUSEV LEARNIN HOW THEY DO IT IN THE SUBURBAN STREETS?!

I didn't think Rusev was missing anything, but I was wrong: He needed a chain. 😍 #STRAIGHTSHOOT

Lana tells John Cena that she and Rusev negotiated with The Authority and that Rusev’s match against John Cena at Extreme Rules will be a Russian Chain Match.

Russian chain match? Is that anything like a Coal Miner’s glove match? #WWE #RAW

My new improv troupe is going to be called A Russian Chain Match. #RAW

Rusev stands over John Cena with the chain, yelling at him.

The Bella Twins come down to the ring.

All them pant slits, Brie! #RAW

Paige comes out to the ring.

Nikki throwing jokes. Lol. When did Nikki get funny?

Summer Rae and Natalya: you just lost to Rosa Mendes. Let that sink in for a minute. #RAW #DivasBattleRoyal

It’s down to Alicia Fox, Cameron, Naomi and Paige

It's down to Paige and The New Day in the #DivasBattleRoyal. #RAW

Cameron is still in there. Good grief #RAW

CAM'RON, no one likes you. #RAW

Naomi takes out Alicia Fox and Cameron with the Rear View.

Cameron and Alicia Fox end up being eliminated.

The best possible outcome is a tie. That means Paige versus Nikki versus Naomi for the Divas Championship. #RAW

Can't they both win? #DivasBattleRoyal #RAW

Paige catches Naomi with a super kick, then eliminates her.

Naomi and Paige did great!

I'm happy for Paige cause I love her & all, but I realllllllly want to see Naomi as champ soon.

Paige put the Union Jacks on her boots to good use. She kicked Naomi straight across the ring and right out! #RAW

Why has nobody ever called Naomi's mother? She literally demands it every week.

Post-Match, Paige and The Bella Twins have a staredown.

Nikki was great on commentary as well.

Post-Staredown, Byron Saxton asks Paige about what’s going through her mind about winning the Divas Battle Royal. Paige says a year ago, she made her WWE Debut and two weeks ago, she teamed with AJ Lee to win her first Wrestlemania. Paige tells Saxton that nothing feels better than working in her home country, winning this battle royal in front of everyone.

Paige won ALL the Wrestlemanias! #RAW

Paige talks about her start, wrestling in carnivals and gyms, getting paid 5 pounds a match, just to make it into the WWE. Paige says to make it in front of the biggest stage in the world in front of her Father, brother and the world, Paige says this is her house. Suddenly, Naomi attacks Paige.

No, Naomi! That is NOT how winners act! #RAW

NAOMI! WHAT HAS GOTTEN INTO YOU! #RAW

#RAW Just gonna assume Naomi was aiming for Saxton, missed, and is just rolling with the punches.

Paige has been attacked in her house! It's a home invasion! #RAW

Oh, Naomi. You could only avoid Cameron's ratchetness for so long. It infected her like symbiote. #RAW

Look on the bright side: Naomi's DEFINITELY getting a new theme now, right? #RAW 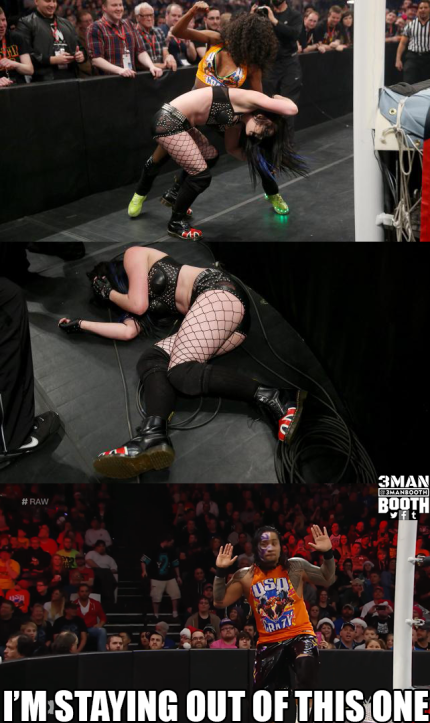 Bray Wyatt talks about love being an obsession and an a sin. Wyatt talks about love consuming your well being that can cost you everything you want. Wyatt tells that person that they’re in luck because he wants to rip out that love like a cancer and feel the empty void with good old fashion fear. Wyatt says fear is stronger than love and sooner than later, this person will have to watch everything they love fade away. Wyatt asks what this person will do when the thing they love is taken away from them. Wyatt tells this friend to pay close attention and to behold The New Face Of Fear.

Bray has been cutting this promo for at least a year. #words

Match 03: The Lucha Dragons vs. The Ascension

sin cara and kalisto are next level. nephews are doing the lucha dragons chant like crazy right now. give kalisto the whc strap immediately 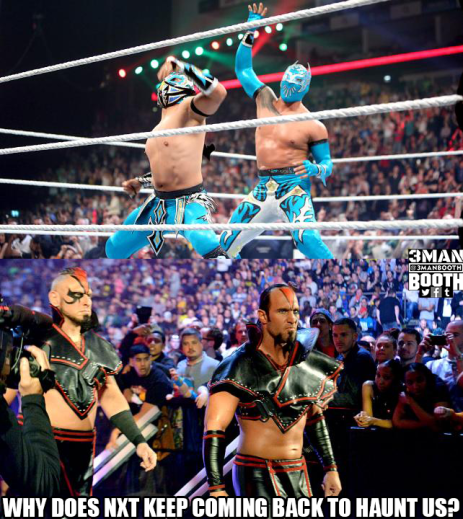 The Lucha Dragons make quick work of The Ascension

Lucha Dragons beat the Ascension. The world goes on with life. #raw