Madison Square Garden is very special to pro wrestling, especially the WWE. It’s the site of the first Wrestlemania, the first SummerSlam and countless other events. On this night, MSG was being celebrated for being the birthplace of Hulkamania (January 23, 1984) as the man at the center of it – Hulk Hogan – was being celebrated. It was Hulk Hogan Appreciation Night after all.

The ring ropes noted the occasion; they were red and yellow instead of their usual white color. Jimmy Hart, Hulk Hogan’s long time friend and some time manager, came out to say a few words. Not to be outdone,  The Outsiders – Scott Hall and Kevin Nash – came out to take a survey of the MSG audience. After all, along with Hogan, they founded the New World Order of professional wrestling, the nWo. Then, Hogan was introduced and received a standing ovation befitting the Hulkster.  But that wasn’t the end of the surprises for Hulk Hogan and the MSG Universe. After all, it ain’t a party without the “Nature Boy” Ric Flair! 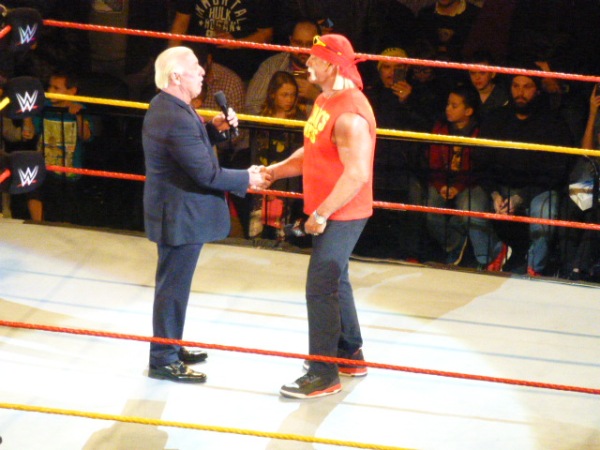 When legends of professional wrestling meet like this in the ring, who knows what could happen? Actually, these two icons showed their mutual respect for each other, recounting moments in both their professional and personal lives. To keep the surprises coming, Triple H appeared with some members from Madison Square Garden: a Senior VP and a long time Archivist/Photographer presented Hogan with 2 items to commemorate the event. The first was a photo from Hogan during the height of Hulkamania:

The second was a banner, to memorialize the impact Hulkamania has had in the hallowed halls of MSG over the past 30 years. The banner was raised and hung in the rafters, alongside the accomplishments of the New York Knicks, the New York Rangers and the New York Liberty. 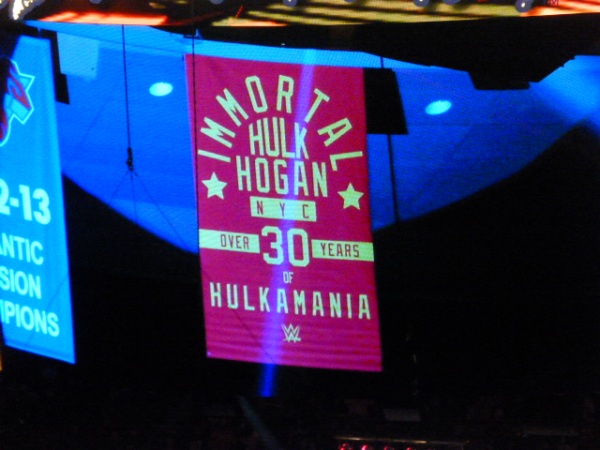 Even without Hulk Hogan Appreciation Night, a show at Madison Square Garden feels special. The added celebration of the Immortal one seemed to make everyone raise their game. It was a good thing too: The Intercontinental, Tag Team, Divas and the US Championships were all on the line that night.