We at 3ManBooth aren’t much of the gambling sort. Wrestling has taught us that gambling usually doesn’t end well: you spin the wheel, you make the deal. But for FWE, we made the exception. We went to the Resorts World Casino for No Limits 2015. Plus, we didn’t gamble. A night of quality wrestling is a sure bet.

The main even featured dueling shooting star presses: challenger Matt “re-born” Sydal against FWE Tri-Borough Champion Paul London. London, inspired by his astronaut costume, explored around the casino, greeting as much of the FWE audience as possible before finally heading to the ring. Both wrestlers showed off their mat prowess, exchanging holds and counters before elevating into the high risk area. Sydal’s aerial prowess is so phenomenal, he was able to perform a counter mid-air. When London went to throw Sydal off the top rope, Sydal reversed the throw into an inside cradle. 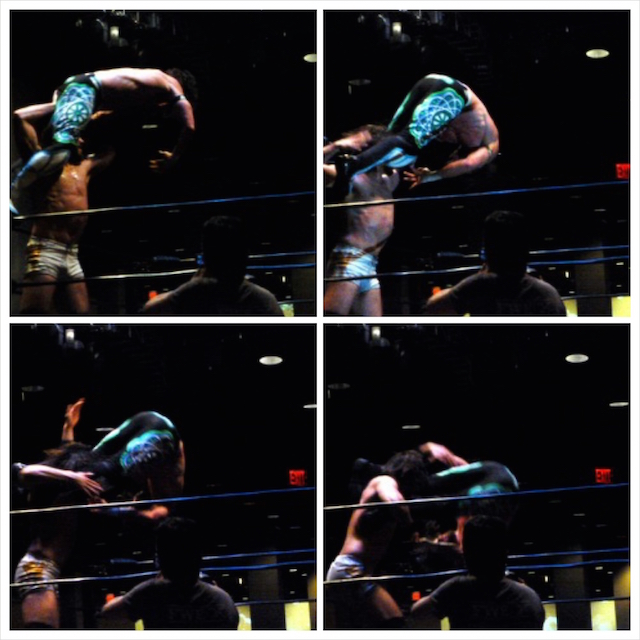 But that wasn’t enough to topple the champion. After his first attempt at a Shooting Star Press was not enough to score the pinfall, Sydal went for another big gamble from the top rope. It didn’t pay off but London’s shooting star press did.

The champion retained the Tri-Borough championship. For his effort, he was awarded with a BALLSPLEX!

The very high crotch angle suplex by Candice LeRae was Joey Ryan’s way of issuing a challenge to London for that title. The next time these two are at an FWE event, there’s sure to be a battle. But that wasn’t the only mayhem the World’s Cutest Couple caused that night.