Some wrestling shows are just that: shows. You attend, have a great time, see some exciting in-ring action, and maybe your voice is a little hoarse for cheering and booing. String 3 shows together in as many days and you no longer have a show; you have an event. When you add a promotion like CHIKARA and a theme like King of Trios, you end up with a wrestling experience. King of Trios is an experience, sorely missed last year, and must be experienced. So much happened!

The idea behind King of Trios is a 3 day open invitation tournament of 3 person teams.  The open invitations was extended to all wrestlers, including females like Kimber Lee and Thunderkitty who competed on Team KE4TPG (Jolly Roger, Lance Steel and Princess Kimberlee) and Team Extravaganza (Jervis Cottonbelly, Marion Fontaine and ThunderKitty) respectively.

But the invitation also extended to wrestlers not part of the CHIKARA Universe. LAX (Homicide, Hernandez and Chavo Guerrero) took part in the tournament as well as The Spirit Squad… well, 3/5 of the Spirit Squad: MIKEY! LENNY! and JOHNNY! Both teams faced The Golden Trio (Grand Champion Icarus, Campeonatos de Parejas The Throwbacks: Dasher Hatfield and Mr. Touchdown Mark Angelositti) in the First and Second Rounds of the Trios tournament. 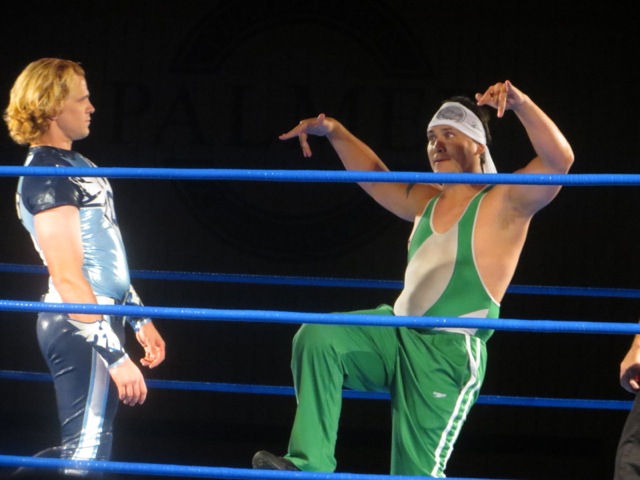 The Golden Trio made it all the way to the Finals but this tournament belonged to the Devastation Corporation. This trio looked like they came from the pages of a 1988 PWI Magazine with the vocabulary of an issue of Muscle and Fitness. No, seriously; look:

But that wasn’t all CHIKARA had in store that weekend. On Day 2, they started a Rey de Voladores (King of Flyers) series. 8 competitors faced off in two Fatal Fourway matches (Shynron vs Tigre Uno vs Rich Swann vs Chuck Taylor and Sonada vs Amasis vs AR Fox vs Orlando Christopher) where the winners faced each other on Day 3. Sonada and Shynron went tooth and nail, flip-for-flip and after Shynron hit this maneuver,

he more than earned the title of Rey de Voladores.

But there was still more! There was a Battle of a Bowtie match where Juan Francisco de Coranado and Rockstar Spud went collar-for-collar.  Even senior referee Bryce Remsburg donned a bow-tie for the occasion … until Cornado ripped it off of him. Cornado ultimately ended up winning the match.

Even though the tournament took precedent this weekend, the long standing feuds in CHIKARA didn’t stop. Twice over the weekend, Deucalion (the big bad that debuted at You Only Live Twice and took out Kobald) interfered in matches helping The Flood (Eddie Kingston, Jimmy Jacobs and Volgar) advance in the tournament. This didn’t sit well with The GreenHorn Militia – Kid Cyclone, brandishing a wrench, Equinox 3 and Create-a-Wrestler 2 – who not only called out Deucalion but also their fellow heroes for not putting an end to it sooner. When they finally got in the ring with this monster, they had some success: They unmasked the behemoth! 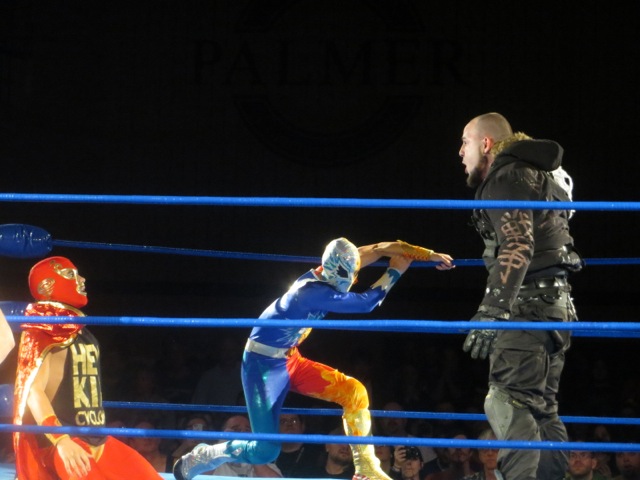 but this wasn’t without consequences. Deucalion proceeded to hit Equinox 3 and Create-a-Wrestler 2 with the same Chokeslam Backbreaker maneuver that killed Kobald.

This was done to teach Kid Cyclone a lesson: never poke the bear.

CHIKARA didn’t end on a sad note though. The Flood hit a crossroads when they had champion Icarus on the ropes. They threatened to destroy CHIKARA if Icarus didn’t hand over the title to Eddie Kingston, the former champion. Icarus regrettably acquiesced, only to instill in Kingston a crisis of conscious. That’s not the way any champion wants to earn anything. The title became a meaningless symbol unless Eddie did the right thing.

And Eddie did the right thing: he gave the title back to Icarus, turning his back on The Flood in the process. What does an unaligned Kingston mean for the future of CHIKARA? No one knows. But as long as Ashley Remington doesn’t run out of Fruit Baskets to give to his opponents (like Yoshi Tatstu), we’ll keep watching.

We barely even touched the surface of this amazing weekend. Check out even more photos in our Facebook gallery, including a candidate for match of the year: The Submission Squad versus The Gentleman’s Club.