In Highlight Reel, 3MB will look at funny and interesting wrestling videos

Wrestling has been responsible for kids breaking curfews for years. Whether it was the time Saturday Night’s Main Event came on in place of Saturday Night Live or the late night channel surfing in search of ECW, there’s been a relationship between “pro wrestling” and “late night.” It’s no surprise then that one of the biggest supporters of pro wrestling has been Conan O’Brien. On his NBC show, late night with Conan O’Brien, he would regularly have stars from the WWF on. It’s a tradition that his successor, Jimmy Fallon, continued until Fallon took over the tonight show (Only time will tell if Seth Meyers keeps the tradition alive). But just because Conan is on a new network and at an earlier time doesn’t mean he’s lost his love for wrestlers.

When the news of recent WWE downsizing broke, Conan and his team used it as an opportunity to come up with a list of terrible wrestler names / characters. Let’s face it: Donny Duct Tape, Miracle Mike, and the Rabid Rabbi were never going to become household names. But at least they were good for a laugh.

But Conan likes to do more than may wrestling name jokes. He often does interviews with these Superstars, whether he and Sheamus are comparing their Irish tans or making jokes about The Miz to his face while the rest of us make fun of him on Twitter. But one of the biggest gestures he made was when he made an episode of “Clueless Gamer,” his video game review series, about WWE 2K14.

Conan had even more fun with the videogame counterparts of WWE Superstars! He even made due on his promise to get in the ring by creating his own character. While he might not be the first Superstar to compete in suit attire, he’s definitely the funniest. 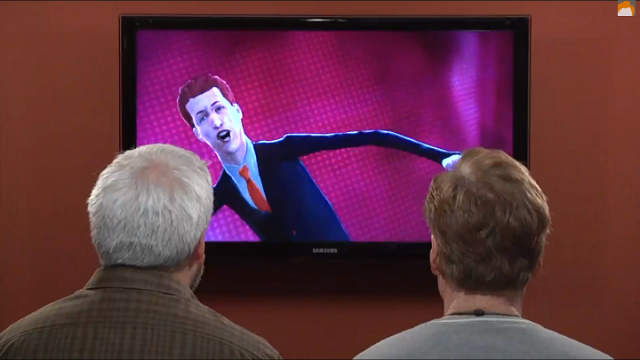 Check out Conan on TBS and look out for more wrestling references.