Last Night, WWE held their Biggest Party Of The Summer, Summerslam live at the Staples Center in Los Angeles, California. While thousands packed a sold-out Staples Center, millions of WWE Fans watched the event on the WWE Network for just…

We could go into a whole review of Summerslam, or a So That Happened version of Summerslam, but instead, we’d rather show you some Summerslam highlights….through animated gifs!

Let’s start with the pre-show…

And what would a Cesaro match be without an uppercut?

But unfortunately for Cesaro, RVD won.

Cesaro is probably backstage right now putting the Andre trophy up for auction on http://t.co/JYVqCWd3mF. Maybe he can get a good price

On to the actual PPV!

The Miz also had a great counter.

But Dolph Ziggler ended up victorious

What a difference a month makes

AJ vs. Paige started with the Bite Of Friendship

Then it got violent…

Cesaro wouldn't have passed out. #SummerSlam

If you thought the lumberjacks were going to be an issue…

And ended up victorious 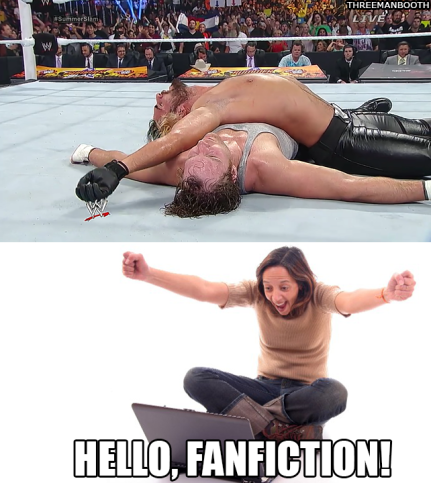 Ambrose and Rollins even turned this stupid stipulation into a great thing!

Bray Wyatt had his following (minus Harper and Rowan)

And A New Jacket!

BUT HE'S GOT A NEW JACKET. #SummerSlam

New Jacket or not, Bray Wyatt managed to do two things: Creep Jericho out

And win the match

Bray Wyatt proved he doesn't need any of his family to win matches. Big victory over Chris Jericho. #WWE #SummerSlam

Scouted all of Brie’s moves

And had Triple H in her corner!

But Brie had her sister Nikki in her corner!

"Brie's scar is on the right. That means the evil twin is and always has been NIKKI!" – Dr. Hibbert #SummerSlam

After her victory, Stephanie McMahon found time to do another challenge: The ALS Ice Bucket Challenge.

Winner: Roman Reigns (via a spear)

Nobody giffed it because they were too busy giffing that RKO.

For the record: I still love Roman Reigns #SummerSlam

Multiple times. It was like delivering a mattress to Madonna

John Cena had very little offense, but it was no use.

Now the bigger question is, now that Brock Lesnar is WWE World Heavyweight Champion, will Seth Rollins cash in his Money In The Bank Contract? 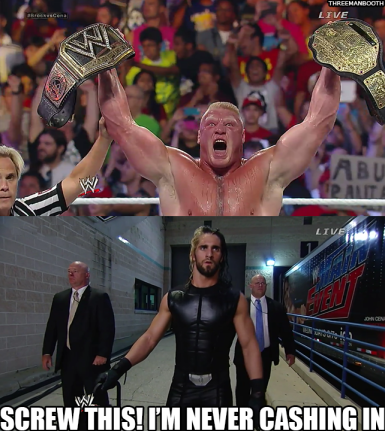 Rollins: what briefcase? I have absolutely no idea what you are referring too.

Guess that answers the question. See you next month for Night Of Champions, exclusively on the WWE Network for just…