SummerSlam is upon us and, this year, the biggest part of the Summer has 3 official themes: “Lights Go Out” by Fozzy, “Goin’ Down” by Flo Rida featuring Sage the Gemini and “Sunshine” by Teddybears. When it comes to themes, the WWE likes to give you options. If you prefer Chris Jericho the Wrestler to Chris Jericho the Singer, you still have Flor Rida and Teddybears. If you don’t consider Flo Rida, a musician, then 1) Welcome to ThreeManBooth.com 2) you still have “Lights Go Out” and “Sunshine” for your listening pleasure. And if you still have a bitter taste in your mouth from Teddybears’ “Cobrastyle” being a theme for SummerSlam 2006, then you choose one of the other two.

But before WWE Pay Per Views had themes, they would occasionally have anthems. One of the more infamous anthems was in 1993. The main event was Lex Luger taking on Yokozuna for the WWF World Heavyweight championship. Luger campaigned to face the Champion after successfully body slamming Yokozuna on the deck of the USS Intrepid.

Part of his campaign including touring the United States in a bus that was decked out in the style of the American Flag while wearing every piece of American Flag memorabilia he could find: shirts, t-shirts, pants, ties, sweat shirts and track pants sans shirt! All in the name of America.

But the icing on the cake was the song “I’ll Be Your Hero,” which would play on WWF programming at every turn. The Jim Johnston penned anthem was designed to inspire everyone to rally around Luger in the hopes that Yokozuna would accept the challenge and that Luger would emerge victorious. Or, at least that was the subtext in a song that says “hero” 26 times in 3 minutes.

The song is undeniably cheesy and inappropriate as anthem. Ballads are not known for their motivational powers; they tend to make people reach for the tissue box instead. Yet, somehow, in 1993, it worked (Plus, with only one song, we didn’t really have a choice). We rallied behind Lex Luger as he got his wish: he faced Yokozuna in the main event. And he was victorious, technically; he beat Yokozuna… via count out. As we all know (except Lex), a title cannot change hands via count out or disqualification, only pin fall or submission. Still, Luger celebrated like he just became the next World Champ. And, eventually, other Superstars joined him. It was the biggest party of the summer after all. 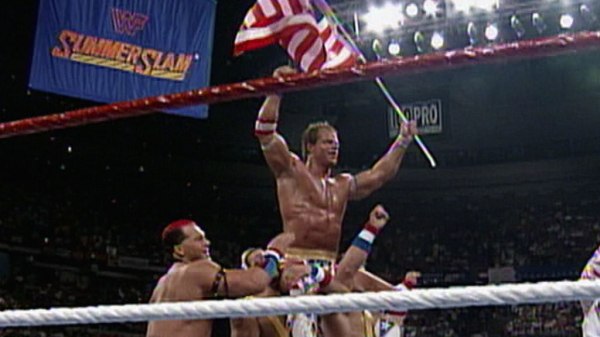 Luger couldn’t have not done it without “I’ll Be Your Hero.” And in doing so, the WWF produced one of the best ear worm anthems of the 90’s. That feeling is there, it’s all around us. That ear worm lives inside of you and me.