I remember when King of Kings was only used for certain occasions. Now it's overplayed.

Triple H says no one wanted to look him in the eye because they’re scared that he might blow a gasket over the fact that the WWE World Heavyweight Championship did not come back to The Authority, and stayed on John Cena.

HHH says nobody will look in his eyes. That's because they can't see past his nose. #RAW

Triple H admits that he is very mad, and madder than he has been in a long time, but he has options on how to handle this. Triple H says he’s so mad that he’s going to tweet his displeasure until his fingers bleed. Triple H says he might send an Instagram or Vine.

Hey @TripleH, how about a TOUT? #RAW

Who taught Triple H the words "Instagram" and "Vine?"

Uh-Oh. Triple H knows what Instagram and Vine is. It's a Wrap, Guys. Time to Move on. 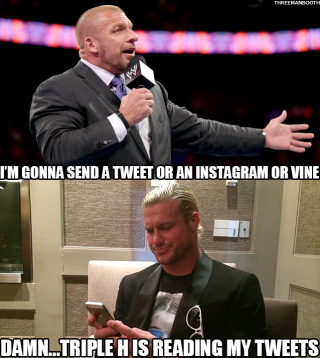 Triple H continues to mock the internet saying that he might start a riot or even stop watching WWE with his friend Mark.

What HHH just did was A class bullying! I feel attacked.

I'm still pissed about Ziggler, Trips. I'll tweet about it all I want.

Triple H names more options like firing everyone in the WWE or just relax because he knows sooner or later, he always wins. Triple H doesn’t mind waiting 4 more weeks to win at Summerslam, but at Summerslam, Triple H guaran-damn-tees that John Cena will no longer be the WWE World Heavyweight Champion.

"True Genius" should be the name of Vince McMahon's Autobiography. Or "Guaran-Damn-Tee"

Triple H starts to wonder who gets the opportunity to face John Cena at Summerslam, but gets interrupted by Randy Orton. Randy Orton, calling Triple H, “H” complains about the fact that he hasn’t had his WWE World Heavyweight Title Rematch yet. Orton guarantees that if given the opportunity, he can beat John Cena in a one-on-one match at Summerslam.

To be fair, Randy Orton did not get his rematch after WrestleMania.

Randy, has a point. #RAW

I like sassy Orton. It's the blue trunks, man. They gave him life. #raw

Triple H tells Randy Orton that he is the front runner, but he has not made up his mind on who will get the chance to face John Cena tonight. Triple H tells Orton that the entire roster will have the opportunity to convince him why they want to face Cena. Triple H wants someone to impress him and prove that they want to be WWE World Heavyweight Champion.

Randy Orton tells Triple H that if Kane would have done his job at Battleground, Orton would have been WWE World Heavyweight Champion. Orton mocks the idea of Triple H considering Kane to face John Cena, but Kane interrupts them.

Kane tells Triple H that he hopes he’s being considered to face John Cena because he knows he can beat John Cena and bring the WWE World Heavyweight Title back to The Authority, as long as he’s not acting as Randy Orton’s protector.

Kane, it's better to be Randy Orton's protector than to be Triple H in The Chaperone.

Kane would be a brilliant choice for the WWE remake of 'Adventures in Babysitting'.

The ROMAN Empire has arrived. #RAW

See, Triple H? Roman Reigns listens to the Internet! It's not so bad!

Dammit, Kane! How does Roman Reigns always catch you on your blindside?!?

To be fair, Kane DOES dress like an everyday DC villain. You would Superman punch him too at first sight.

Triple H tells Roman Reigns that he believes that Reigns is going to have a match against Kane and Randy Orton right now!

The H in Triple H stands for hater.

This is a tweet letting everyone at WWE know of my disapproval of a Randy Orton and Kane in a match.

Kane tries to tag in Roman Reigns, but Orton refuses.

Orton didnt tag Kane cause the sumbitch is lazy. #RAW

Kane grabs Orton for a Chokeslam, but gets hit with a Superman Punch.

That was Kane's 100th Superman Punch.

2 in 1 night! Kane's on his way to his 10th Superman Punch being free!

I love how Roman Reigns has signature poses for every action.

Nikki, you'rein a handicap match too?!?! Don't be #FearlessNikki, be Roman Reigns!

More like 2 on 1. We know Eva Marie and Cameron can't wrestle.

This is what the Miami Heat looks like now. One Star (Alicia Fox), Three Extras. Come Back, LeBron!

Brie Bella is at ringside. Brie and Nikki hug each other. 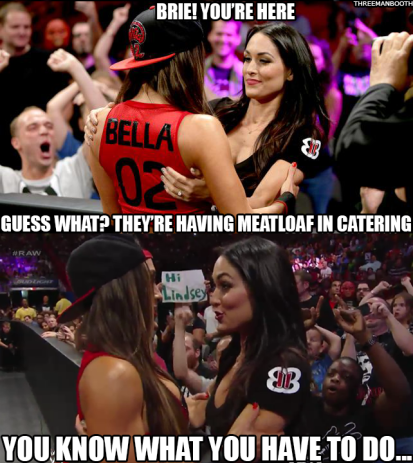 Brie Bella is here…and whats this? My Gawd she has a ticket! #wwe #Raw

She paid for the ticket! She's allowed to be there!

And Steph is here to kick Brie out. #RAW

"Oh, look! It's the Quitter! *The WWE Universe looks around for CM Punk* …No. No guys. I'm talking about Brie." – Stephanie McMahon

Stephanie McMahon tells Brie Bella that she went from being the world famous Diva and a start of Total Divas to being another face in the crowd. Stephanie calls Brie out on abandoning her sister Nikki for Daniel Bryan, the B+ Player. After a “YES!” chant, Stephanie mocks Brie for quitting for the injured Daniel Bryan, but tells her she’s glad that she’s here because she gets to watch Nikki Bella get demolished.

Brie Bella is the voice of the voiceless

Eject that crazed fan! Eject her!

Brie, If you wanna get to a McMahon when feuding with them then you need to drive a beer truck to the ring.

Stephanie McMahon calls Brie Bella a loser and a quitter, then tells everyone to let that be a lesson anyone who tries to mess with her.

Come on, Nikki… It's 3 skinny chicks and a giant doily. #raw

Post-Match, Stephanie McMahon tells Nikki Bella that this whole think is Brie Bella’s fault. Stephanie says sooner or later, Nikki will do exactly what her sister Brie Bella did and quit. Stephanie drops the mic on Nikki, then walks off.

Stephanie better watch out. Brie Bella might be in her trunk later tonight. #wwe #raw

So you're telling me Eva and Nikki aren't friends after all? Total Divas lied to me, this changes EVERYTHING. #RAW

#CosplaySandow is the best. Seriously! #RAW

Sandow and Dallas are both too meta for me to figure out who to cheer for.

Somebody find a picture of Bo Dallas with dry hair, please. #Raw

DO YOU BO-LIEVE IN MIRACLES?!?! BO DALLAS WINS!

#RAW LeDamian James is more over in Cleveland than the Miz