Throwback Thursday: The TRUTH Behind Tell Me A Lie

In Throwback Thursday, 3MBooth takes a look back at some old-school wrestling videos

I’ve known this week’s Throwback Thursday all my life. Or least that how it seems. This week’s edition is none other than the Slammy Award Nominated Shawn Michaels Music Video: Tell Me A Lie. 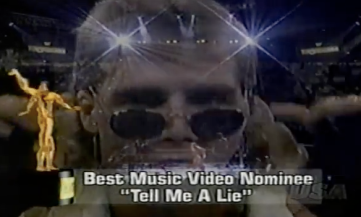 As a child, there were two things that always stuck in Shawn Michaels’ “Tell Me A Lie” Music Video.

2. For a Shawn Michaels fan, this video was REALLY depressing because I honestly believed this was the end for The Heartbreak Kid.

Of course, this 1995 Love Ballad was not the end for Shawn Michaels and he went on to perform for the WWE Universe for several more years. But at the time, things looked bleak.

2. And of course, Shawn Michaels awkwardly gyrating in slow motion.

However, when I watched Signature Sounds: Music Of WWE last week, I heard the TRUE meaning behind the song.

SPOILER ALERT: If you do NOT want to be spoiled about this, do not click any further. It’s not Game 7 of the World Series or the ending of Breaking Bad, but we know people are really particular about their spoilers.

Jim Johnston reveals in the extras of the DVD that “Tell Me A Lie” was originally written for his Mother, who passed away, but the WWE needed a piece of sad music for Shawn Michaels’ Potential Swan Song, so Jim Johnston let them use it.

Hearing the true meaning behind “Tell Me A Lie” broke my heart (No pun intended) and now, the cheesy love ballad that I once associated with a WWE Music Video is now associated with something that hits very close to home.

…And of course, Shawn Michaels Awkwardly Gyrating in Slow-Motion.

Regardless of what you associate “Tell Me A Lie” with, it’s a staple in Shawn Michaels lengthy career and deserves to be acknowledged. So here it is for this week’s Throwback Thursday! Hope you enjoy it!

….One more time for the ladies.