In Ask Him, 3ManBooth will let the 3MBoothiverse make the tough decisions.

In honor of Presidents’ Weekend, the WWE is having a sale. As part of the promotion, they created a graphic of Daniel Bryan, John Cena, The Rock and Randy Orton as the faces on the iconic Mount Rushmore, the monument carved the faces of U.S. Presidents George Washington, Thomas Jefferson, Theodore Roosevelt, and Abraham Lincoln into the Black Hills of South Dakota. 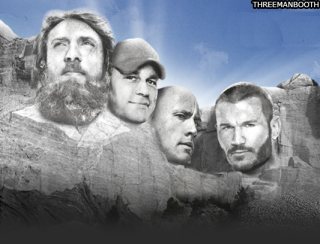 But that’s not the first time they’ve posed that question. Back in 2012, WWE.com had a poll where the WWE Universe determined their Mount Rushmore of the WWE: The Undertaker, Stone Cold Steve Austin, John Cena and Hulk Hogan: 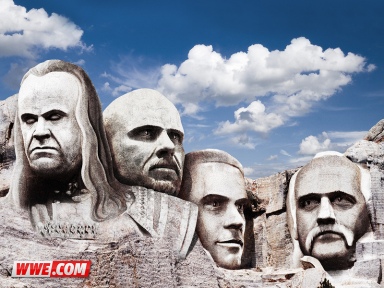 Questions like this are rife for discussion and fervent debate. Plus a ton of Photoshop! 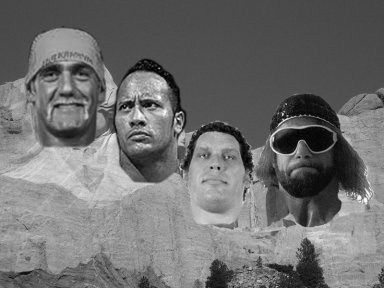 Sports Journalists Stoney and Bill of CBS Detroit Sports made their own Mt. Rushmore: Hulk Hogan, The Rock, Andre the Giant and ‘Macho Man’ Randy Savage. And then there’s the group actually known as “The Mount Rushmore of Wrestling.” In Pro Wrestling Guerilla (PWG), Adam Cole, The Young Bucks and Kevin Steen banded together to declare themselves the be all and end all of wrestling. 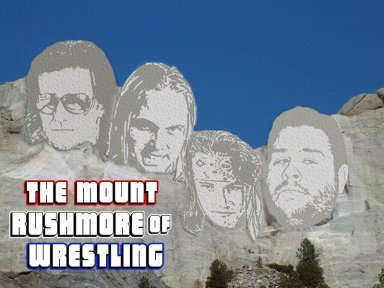 You know they’re official too. They made t-shirts. But we ask you, 3MBoothiverse, which one of these is your Mount Rushmore of Wrestling? Which Wrestlers / Managers / Valets / Promoters would you etch on the side of a mountain?