In Boo This Man, ThreeManBooth will call out someone or something that really gripes us.

2013 has been, wrestling-wise, a year of mostly cheers, which is what we like to focus on primarily. 2014 is right around the corner so before we wipe the slate clean, we can’t help but get in one more jeer: the new tag team of Rey Mysterio and The Big Show. It’s well established that we are not the biggest fans of either competitor, what with regular appearance of #BigShowRuinsThings and #Reycist on our timeline. We know lots of people want to cheer former World Champions that have main evented Wrestlemania. Certainly kids look up to Big Show, literally, and Rey Mysterio, metaphorically. But their team-up gave them a renewed sense in the WWE. And a new reason for us to boo them.

Looking back at TLC, the last PPV of 2013, Rey Mysterio and the Big Show took a spot in the Four Way Elimination Match that they didn’t earn. They had been a team for what felt like a week and were in a match alongside Tag Team Champions Cody Rhodes and Goldust, The Real Americans (Antonio Cesaro and Jack Swagger) and Rybaxel (The Ryback and Curtis Axel). We can also make a case for Rybaxel unfairly being in that match as well but at least Rybaxel has a team name, albeit a pharmaceutical-sounding name. Still, The Usos should’ve been in this match over the Big Show and Rey Mysterio and definitely over Rybaxel.

Since this newly minted duo didn’t win, we let it go. Then, we went to the WWE Live show at Madison Square Garden. As Bret Hart proclaimed years ago, “MSG isn’t a church but it’s holy ground.” So when Rey Mysterio showed up for his match against Alberto Del Rio dressed as Spider-Man, he performed an act of borderline sacrilege!

Rey Mysterio, You are not Peter Parker! You are not Miles Morales! Yes, you are an ambassador of the lucha libre style but that does not make you Amazing, Spectacular, Ultimate or Superior! You are not Spider-Man! Spider-Man doesn’t have tattoos. He doesn’t have bare arms. He has a spider on his chest, not the numbers “619.” Your Spider-Man is a San Diegan, which is wrong: he’s a New Yorker. Plus, Spider-Man was (briefly) a wrestler! So, really, you’re dressing up as another wrestler. You know what that makes you? Charlie Haas! 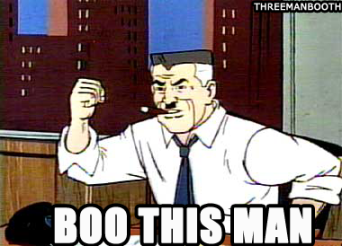 Now let’s make the tag to The Big Show. 2013 was not a great year for him, to be honest. His financial troubles were made public; Stephanie and Triple H used that to shame Big Show into carrying out their wishes against his will. While a particular tirade at the hands of Stephanie earned a Slammy for Best Insult, it went to Stephanie. He was fired despite having an iron-clad contract, which only revealed that no one in the WWE knows what the term “iron-clad” is supposed to mean. Then Big Show sued the WWE (and would’ve won millions) only to drop the lawsuit in favor of a title match against Randy Orton … which he lost. If there’s anyone who is looking forward to a fresh start in 2014, it’s gotta be The Big Show, right? But then, to advertise for the last RAW of 2013, we were treated to this:

Is this really how you want to close out 2013, Big Baby Big Show! Your abuse at the hands of The Authority should have taught you to say no to certain things. If someone asks you to wear a diaper, you make like Daniel Bryan circa 2012 and say “No! No! No!” Don’t be like Daniel Bryan circa 2013 aka “YES! YES! YES!” You’re only giving Cody Rhodes (or anyone) more fodder the next time they call you an embarrassment. Plus, as KeepItFiveStar said on RAW, your Main Event days are over! Champions wear belts, not Huggies!

4 Responses to Boo This Man: Big Show and Rey Mysterio