In case you have been living under a rock, or you’re The Rock, WWE has entered into a partnership with Hanna-Barbera. Earlier this week, we got a glimpse of the Scooby Doo feature where the Scooby Gang needs to solve a mystery … at Wrestlemania! It features the voice talents of WWE Superstars like John Cena, AJ Lee, The Miz and – somehow – Sin Cara. Also, the WWE announced a Flintstones Crossover! A pre-historic WWE should have Superstars like Vince McMagma, John Cenastone, The Boulder Twins, and CM Punkrock, who (we can imagine) is a “Great Gazoo” guy.

Brodus Clay has to be involved in this project, right? How could  The Funkasaurus and The Funkadactyls not be walking the dinosaur or doing the Bedrock Twitch? But why stop there: the WWE should reach into the extensive Hanna-Barbera library for more cross-overs, bringing out familiar faces for a new audience. Here are 5 potential cross-overs that we would love to see WWE and Hanna-Barbera do.

Note: We took into consideration that animation takes a long time to make, so these storylines might be a few months old. 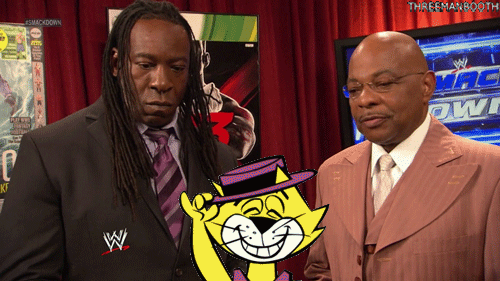 The  question, “Who is really in charge?” looms over all WWE’s programming, especially on Raw or Smackdown. All it takes is one clever person to come in and they can quickly rise to power. In the Hanna Barbera verse, there is no one more suited to reign in chaos than Top Cat. Not only does he come with his own theme song, but he also comes with his own entourage, a Mean Alley Posse, if you will. Top Cat is so adept at lying, cheating, and stealing, he probably influenced Eddie Guerrero. Most ‘friends’ get to call him “T.C.” and he’ll use that ‘friendship,’ to pit General Manager of Smackdown Booker T against his Senior Adviser Teddy Long; the seeds have already been planted. By the time Booker T and Teddy realized they’ve been had, Top Cat would have already redecorated his new office. Mr. McMahon, impressed by the moxie and the style of this alley cat,  would promote T.C. to the General Manager position on RAW. Unfortunately, the call of the Alley is too strong. Officer Dibble, back from vacation, would threaten to take away Top Cat’s alley phone, putting an end to all his other cons. Top Cat always sticks with what he knows: the alley.

Snagglepuss is a pink mountain lion that is always keeping an eye toward the “good life.” He always wears French cuffs, a starch collar and a tie, just in case he is called into a high-society party on a moment’s notice. Looking to get out of his cave, Snagglepuss attends what he thinks is a ballroom event for “World Entertainment” (the flyer was strategically torn). What it turns out to be is Monday Night Raw with Fandango having an Open Dance Challenge with the WWE Universe. The impeccably dressed lion answered the call and not only out-danced the Baryshnikov of the WWE, but also failed to pronounce his name correct: “Fan … dango, even.” Enraged, The Ballroom Brawler challenges Snagglepuss to a wrestling match. Will he make our favorite pink lion say “Heavens to Murgatroyd!” in agony or will Snagglepuss make Fandango exit stage left?

Battle Of The Three Person Bands

Josie McCoy, Valerie Brown and Melody Valentine. Together they form “Josie and the Pussycats” and have embarked on not only a world tour but also on an intergalactic tour, solving mysteries along the way. The Pussycats have finally returned to Earth, along with managers managers Alexander and Alexandra Cabot and Alan M, the band’s roadie / love interest. Before they can take a well-earned vacation, they realize something is wrong: There’s no more music in Riverdale! Actually, there’s no more music on Earth! A further investigation finds reveals the truth. Music isn’t entirely gone: there’s only one band left and it’s the Three Man Band, baby! who, incidentally, still haven’t released their first single yet. How can Josie and the gang live on a planet without music after spreading their sonic message across the galaxies? Will they get to the bottom of this rock meets wrestling mystery in this Battle Royal of the bands? 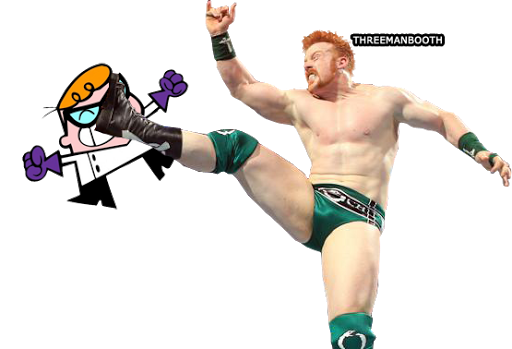 In Dexter’s laboratory. lived the smartest boy you even seen… except he is terrible at Gym. Tired of acing every class but P.E, Dexter decided to use his brains to add a little brawn. He builds a life-like robot based on a computer analysis of what Dexter would look like if he were as strong as he is smart. Coincidentally, the red-haired, alabaster-skinned scientist resembles the red-haired alabaster-skinned WWE Superstar, Sheamus. But when Dee Dee climbs into the contraption before Dexter can, well, then it’s a shameful thing, isn’t it? “Sheamus” runs around town, Brogue kicking (Dee Dee is a ballerina after all) everyone and no one can tell the difference between this Celtic Robot and the Celtic Warrior. To stop this mayhem, Dexter needs to call upon the help of Monkey, who has experience taking down a grappler; he defeated Rasslor in the Intergalactic Wrestling Federation. Can Monkey keep his streak alive?

The City Of Townsville… IS UNDER ATTACK! Which demented villain is up to no good this time? Fuzzy Lumpkins? HIM? Mojo-JoJo? No! It’s the WWE’s very own Hounds Of Justice, The Shield! What injustice do Dean Ambrose, Seth Rollins and Roman Reigns spy on the streets of Townsville? Well, The Powerpuff Girls! Those 3 are constantly running around, taking down monsters and causing millions of dollars in major property damage in the process. Mr. Mayor does the only thing he can. He agrees to a 6 person tag match between the Powerpuff Girls and the Rowdyruff Boys of the WWE. Will the numbers game be too much for Blossom, Bubbles, and Buttercup? Will the PowerPuff Girls be forced to Believe in The Shield? Or will the day be saved thanks to … the Powerpuff Girls? 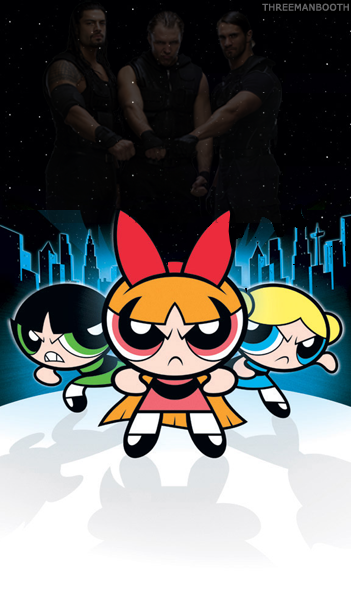