Posted on December 3, 2013 by keepitfivestar

And its CLOBBERING TIME, to start Raw!

There’s something different about him…

No, Punk! It's hoodie no pants, not hoodie and pants!

CM Punk References Living in His Own Universe. Question is: Is It The 616?

…and Punk washed his hair? What bizarro nega Punk did we get tonight?

I'm usually somewhat attracted to CM Punk's hair. Tonight is not that night.

CM Punk says Triple H isn’t that dense to pick a fight with someone who prides himself on being one of the biggest anti-authority threats to the WWE. Punk hopes he’s wrong, but if he’s right, then Triple H and the Authority are the biggest, sorriest, bunch of douchebags he’s ever come across in his entire life. Stephanie McMahon comes out and interrupts CM Punk.

Well, this should be an interesting battle of words.

having a lite twerk session to Steph's music.

The QUEEN-DOMMMMMM! Where the Kings bow downnnnnnnnnnn! (The music is back!!)

Stephanie McMahon tells CM Punk and the WWE Universe that she hopes they had a great Thanksgiving holiday. Punk calls her out about not caring about his Thanksgiving.

"You Don't Care About My Thanksgiving!" – CM Punk. Stephanie Cares, Punk. Not Bed Bath & Beyond Gift Card Levels of Care, But She Cares.

This Stephanie McMahon promo sounds like an episode of The View. @WWE #RAW

Stephanie McMahon tells CM Punk that her family are big advocates of free speech, and that Triple H appreciates free speech more than anyone, since he was a founding father of D-Generation X. Stephanie tells CM Punk that it’s beneath The Authority to attack Punk for calling him a bad name and that they’re not in Kindergarten. Stephanie calls Punk out for pointing the finger at them, then claims The Authority was just as upset as Punk when The Shield attacked him.

We might not be in Kindergarten, but Punk's hairstyle is.

Wait. Aren't We in Kindergarten? This isn't a Live Action "Tales from Wrescal Lane"?

CM Punk doesn’t believe Stephanie McMahon, but Stephanie tells him that The Authority has bigger things to worry about tonight like the contract signing between John Cena and Randy Orton. Stephanie tells Punk that if he wants to air out any more grievances, he can speak with the Director Of Operations, Kane. Kane comes out next.

Kane in a suit.

Kane the DOO is here to DOO something.

Is that lavender? That doesn't go with red. Poor fashion choice. #CorporateKane #RAW

Kane, dressed in a business suit and lavender shirt, gives CM Punk a corporate spiel supporting Stephanie McMahon’s claim that The Shield had nothing to do with the attack on CM Punk. Kane tells CM Punk that the issue is resolved, and asks Punk if he has any more questions. Punk responds by asking Kane when he became the Big Red Asskisser. Kane advises Punk not to take this lightly, but Punk advises Kane not to patronize him. Kane tells CM Punk that they’re not the enemy and recommends CM Punk doesn’t go down this path. Punk calls Kane a sellout, and says since Kane already sold out, he can either get knocked out or be put to sleep. Kane almost comes down to the ring, but Stephanie McMahon stops him.

My sister is shocked at how eloquent Kane is.

Kane is so Corporate, he looks like he loves Red Tape … and choking you with it.

This opening segment is like watching your parents discuss their favorite rap albums. #RAW

Besides lighting things on fire and watching them burn, Kane also enjoys reading business textbooks in his spare time.

For an extra $20, Kane will install Norton AntiVirus on your computer. @WWE #RAW

The Shield comes down to the ring, and CM Punk grabs a chair to protect himself.

I hope The Shield filed the proper 'run in' request forms for this segment.

Whateva whateva The Shield does what they want

The Steel Chair: The Next Best Thing to Fleeing the Scene.

Oh my god. What is with the @WWE's hard on for Handicap matches?

"What Should the Champion Be Called After TLC?" Daniel Bryan.

They should hold both titles in abeyance after TLC. Call it a Univacation.

This is the Rubber Match Between Damien Sandow and Dolph Ziggler? Shouldn't They Be Attacking Each Other with Rubber-bands or Something?

Dolph Ziggler's so broken down that he'll take any championship he can. By the end of the year, he's gonna bring back the Hardcore Title. 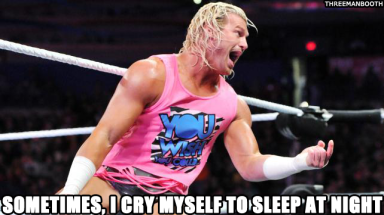 Big E. Langston is on commentary.

Big E. Langston is the Skip It Champion of the WWE! Men's Division. AJ Lee is the Undisputed / Unified Champion

booooo but i love you Sandow!

Tough Break, Ziggler. Too Bad There Wasn't a Drum Kit or Something to Break Your Fall

Ziggler still hasn't come back after that concussion.

Go home, Dolph. Take the rest of the year off. Come back strong in the Royal Rumble.

Post-Match, Damien Sandow and Big E. Langston have a staredown.

Would love Sandow berating Big E for the inferior intellect of his people. Ya know. Weightlifters.

Maybe Dolph Ziggler will get a Goldust type push in the future. Only 15 years to go Dolph! #wwe #Raw

Match 02: Natalya and The Bella Twins vs. AJ Lee, Tamina and Summer Rae

There Goes the Undisputed Skip-It Champion of the WWE, AJ Lee! #RAW

Rather than get on the apron, AJ Lee decides to skip around the ring.

AJ Is stuck in an infinite loop #raw

AJ Lee is skipping extra tonight to burn off calories from Thanksgiving.

Someone needs to take the batteries out of AJ

Stop Calling AJ Crazy! You Should Be Counting AJ's Laps Ring Rotations like the Cesaro Swing!

Sweet Dee and Mac are doing well. Dennis is still skipping around the ring #raw

Summer just yelling for AJ like she's a bus that didn't stop for her.

AJ Lee finally gets in the ring, but Natalya manages to roll her up.

Winners: Natalya and The Bella Twins

That's Not Fair! AJ's Legs are Tired from all That Skipping!

Post-Match, AJ Lee grabs her Divas Championship and skips away.

AJ has the best mentality after a loss. Skip your pain away, AJ. Just Skip it away…