In Santa with Muscles, ThreeManBooth talks about Wrestling related
items that may make great gifts during this Holiday Season.

We’ve been showcasing members of The IWC, the Illustrated Wrestling Community, and the various art styles to admire. During the Holiday Season, a lot of artists make their work even more available as part of Black Friday / Cyber Monday promotions. Places like Bottleneck Gallery regularly have exhibits with several artists’ interpretations of the same topic. The theme of one exhibit was “I Love You Man.” Artist Darrin Shock took that to create a portrait of “The Family,” another name for Bobby Heenan’s collection of wrestlers also known as the Brain Trust: 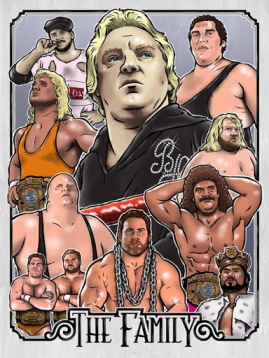 while Artist Chris Koehler took the same theme and made it about the Roddy Piper, Keith David cult-classic They Live: 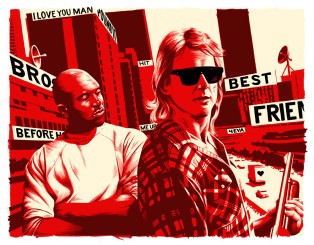 Not only are these both available at Bottleneck Gallery part of their end of the year sale, but they also have non-wrestling artwork available, appealing to people on your shopping list. We’re not saying you need to pick up something from the 3NES Exhibit, a tribute to Nintendo’s beginning and its 3 principle tent-poles – Super Mario Bros, the Legend of Zelda and Metroid – but … actually, that’s exactly what we’re saying. Go get some. 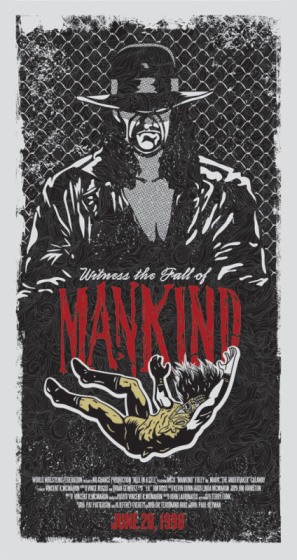 Another artist with some wrestling themed artwork on sale is El Jefe Design. Unfortunately, the picture above, “Witness the Fall of Mankind,” is no longer available (Sorry about that). It was originally created for a exhibit on the Greatest Moments in Sports at Gallery1988 (who is also having an end of the year sale). However, El Jefe’s love of pro wrestling didn’t end with King of the Ring 1998; he incorporated wrestling elements into some of his other designs. His “Baseball Fury” / “Come Out and Play” print, exclusive to New York Comic Con 2013 includes CM Punk’s signature taped hands with red X’s on them. A poster for a Rancid / Transplants concert bears the same taped hands and CM Punk’s GTS logo on the jacket of the character’s design. Both the bands and the wrestler are fans of each other. However, our favorite design of his might be the Lucha Library:

An A to Z print with a luchador for each letter of the alphabet is a very useful idea. It’s a reference guide for the world of lucha libre and its distinctive luchador masks. It also is a learning tool for any young wrestling fans just starting to learn the English language. While we would prefer it if P was for Psicosis instead of Pandito, we understand: the silent P is a bit advanced and confusing on a poster. Plus, the print does have L for La Parka; the Chairman of WCW would approve.