Posted on October 29, 2013 by keepitfivestar

Meet the New Champ. Same As the Old Champ.

John Cena tells his BFF, Stu the Cameraman, that it's Monday & he gained a few pounds. Stu just ran a 10K but unlike Cena, he's not bragging

I hope John Cena blows out his other elbow by doing his stup-ass salute. #RAW

John Cena hears the boos and said he knows and misses that sound, and that can only mean one thing, he’s back. John Cena asks if they missed him, and he gets a mixed reaction of “YES/NO” chants.

Chanting Yes?! Who are these people? Where's the male 18-40 demographic to counter? #Raw

Don't cry because Cena is champ, smile because Del Rio's reign of terror is over. #RAW 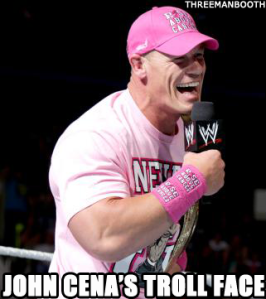 John Cena says that there are a lot of people who thinks he came back too early, and he would like to thank those skeptics. That skeptic is JBL. John Cena says that he had to listen to JBL talk about him every week on commentary, then imitates JBL doubting John Cena (poorly.) Cena thanks JBL for the Motivation, then says that JBL was wrong because the New World Heavyweight Champ Is Here.

So it's JBL's fault Cena's back so soon. Damn you JBL.

Clothesline him to hell, JBL!

Keep in Mind that John Cena had WEEKS to work on that Impression.

John Cena says that he’s back not for one match, week, or month; he’s back on Monday Night RAW. John Cena talks about him coming back. Cena’s accent suddenly changes as he starts talking about what the World Heavyweight Championship means and that means he’s back as the “Friday Night Delight” on Smackdown. Cena brings up that he’s not going to Europe for a “Special Appearance” he’s going to fight as the World Heavyweight Champion.

He just called himself the Friday Night Delight and now owes John Morrison $5.

I've never heard a man shift between 3 accents in the span of 2 minutes.

Why did Cena randomly get ghetto again? #RAW

Is Cena's Thuganomics Accent Back Because He's On Smackdown Again?

John Cena's going back to Smackdown and suddenly, he gets his Thuganomics accent back.

I hope John Cena goes back to SmackDown on UPN. #RAW

Can we stop putting so much emphasis on Cena's injury now? It's impressive, but not winning a gold medal with a broken neck impressive #RAW

John Cena says that there’s going to be another celebration tonight. The celebration of Randy Orton. Cena says we have to hear a lot of people talk so he’s gonna stop talking right now. Cena reminds everyone that he’s back and tells Alberto Del Rio that he knows he has a rematch clause and if he wants some, come get some because The Champ Is Here.

Did they remix Damien Sandow's theme?

It's so LOUD and bass heavy now.

Damien Sandow says “The Uncrowned Champ” is here, then tells John Cena that he’s not fooling the unwashed masses, then says maybe he is. Sandow says that Cena may be fooling the WWE Medical Staff, but he can’t fool Sandow. Sandow tells Cena that it is physically impossible for a tricep to heal that quickly. Sandow tells Cena he knows what Alberto Del Rio did him, and that the only reason Cena’s out here is to put up a front because he doesn’t want Sandow to cash it in.

I love how when everybody in WWE decides to wear pink, Sandow's suddenly in all black.

Sandow Should Cash In and Challenge John Cena to an Arm Wrestling Match.

Damien Sandow says that since he’s Money In The Bank, he can cash in, whenever he wants, like right now. Sandow teases a cash-in, but says he’ll do it any time but tonight.

Being a rebel against RAW's theme song, tonight is NOT the night, says Sandow.

Damien Sandow tries to walk away, but John Cena pushes him. Sandow retaliates by viciously attacking John Cena’s arm with the MITB Briefcase

The most brutal piece of chocolate ever.

GODDAMN HE'S ATTACKING HIM WITH THAT CHOCOLATE BRIEFCASE, JOHN IS LACTOSE INTOLERANT, YOU SON OF A BITCH. #RAW

"Rise above this" LOL

Damien Sandow yelling "Rise Above This!" While Throwing Cena Around is Amazing.

@AKATheMaskedMan Just got told "that's not funny dad!" By my 5 year old after @TheDamienSandow 's "Rise above This" line.

Yes Sandow. Beat the Black out of Cena. #wwe #raw

This beating Damien Sandow is putting on John Cena is a thing of beauty.@WWE #RAW This is Beethoven's 9th in wrestling form. #ThankYouSandow

Damien Sandow went from losing on Superstars to laying out John Cena. That's like if they named El Dandy as President of WCW. #RAW

Hey, Sandow. This beatdown is great, but you gotta cash in!

Damien Sandow cashes in his Money In The Bank!

OMG, this happening, Sandaw is cashing in! #raw.

This is the longest MITB cash in in history.

Pummel the groin area Damien, he's been rehabbing with Nikki for weeks it'll be retreating at any movement #Raw

Didn't Cena lose his cash in? Will this be an ironic match?

If Cena Wins. I'll Continue with my life as is. #raw

If Sandow Loses, We Grumble Quietly.

That wasn't an AA so much as a back body drop with pizzazz. #WWE #Raw

John Cena rolls Damien Sandow back into the ring.

Stop Showing Off Cena! Take the Count Out Victory if You Can Get It.

Why didn't you just win by countout, stupid?

Damien Sandow hits the Terminous Neckbreaker on JohnCena, but only gets a 2 Count.

WOW that was a mean neckbreaker

John Cena tries to do the STF, but can’t due to the injured arm.

LOL, you idiot, you can't do the STF with one arm. Who do you think you are, Cesaro?

John Cena hits a crazy neckbreaker of his own Damien Sandow!

Who do you think you are Cena?

Damien Sandow hits the “You’re Welcome” on John Cena, but only gets a two count.

Mistake! Don't go for the Uncle Slam! That's The Patriot's Move! If The Patriot couldn't beat ANYBODY with it, you can't beat Cena with it!

If Damien Sandow Loses, I Blame the Patriot and Uncle Slam!

Damien Sandow locks the Crossface in on John Cena!

The Copernicus Crossface from Damien Sandow!

The most intelligent of crossfaces

Damien Sandow does the Uncle Slam…again.

Damien Sandow goes for the Piledriver, but John Cena counters with the AA.

#RAW A bad arm, a bad knee what else do you need Damien

All the angry cat memes to you WWE.

WHY WOULD YOU DO A PILEDRIVER, SANDOW?! A move that you NEVER DO! It's like you WANTED to lose!

So John Cena at 50% (Bad Arm, Bad Knee) is Better Than 100% of Damien Sandow #YoureWelcome

If I was Sandow, I'd show up next monday like nothing ever happen. 'What? That wasn't me, That video is photoshoped. Altered footage."