Posted on April 12, 2013 by 3mbooth
In Snapshots, Three Man Booth searches for images to share.

The NCAA’s March Madness just finished for both Men’s and Women’s College Basketball. We at ThreeManBooth extend our congratulations to the Louisville Cardinals and the Connecticut Huskies. This is an unusual territory for us; we’re not used to sports that end. Wrestling has no off season and thusly, any associated madness is perennial (Manias are an entirely different thing.). Case in point, Wrestling’s biggest Madness – Macho Madness – is the never ending appreciation or one of Wrestling’s greatest performers: Macho Man Randy Savage. This guy we met at Wrestlecon, for example, had a severe case of Macho Madness, the good kind.

His Macho Man was spot on. His accent was had the right amount of gravel to it and he even perfected Randy Savage’s trademark lipcurl. It’s a dedication that is rarely seen among Macho Maniacs.

Some people show their Randy Savage dedication with unique tribute sites. By now, you have probably heard of the Tumblr site (also a Facebook Page) Where’s Randy Savage. It photoshops the Macho Man onto magazine covers, movie posters, or into famous events pictures of famous events or movie posters or just random images. Think of it like Where’s Waldo on Slim Jims. 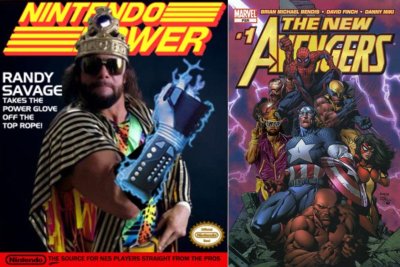 But there’s also another Tumblr, Macho Man Wins, that chooses to show their Macho Madness in action figure form. Each new image shows Macho Man defeating another classic action figure, from Thanos the Destroyer to Lion-O, Lord of the Thundercats. 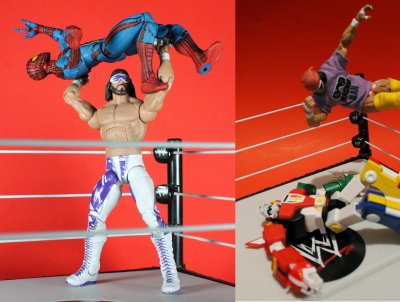 In that very ring, Macho Man has no equal. Macho Man Wins proves that his loss to Spider-man in Spider-man was a fluke; I mean, the movie is named after him! How else was it going to play out? Only Randy Savage could befell a Voltron, a robot made up of smaller robots, long enough to deliver his patented elbow drop.

Check out Where’s Randy Savage? and Macho Man Wins whenever you need a little excitement.