Posted on February 6, 2016 by keepitfivestar

Another week? Another all new Total Divas: Season 05 Recap! Let’s get started!

Nattie wants to throw Tyson Kidd a surprise party, thinking it will lift Tyson Kidd’s spirits while he’s recovering from neck surgery. She thinks Tyson is depressed because all he wants to do is watch the WWE Network (Ain’t nothing wrong with that!).

Nattie on #TotalDivas: We can't sit at home and watch WWE all day.
Vince: That's it! Take away her WWE Network.

Nattie: We shouldn't stay inside watching WWE all day long.
Kidd: I can't or I shouldn't?
There's your #WWENetwork Commercial! #TotalDivas

TJ watching his own matches on repeat is pretty sad #TotalDivas 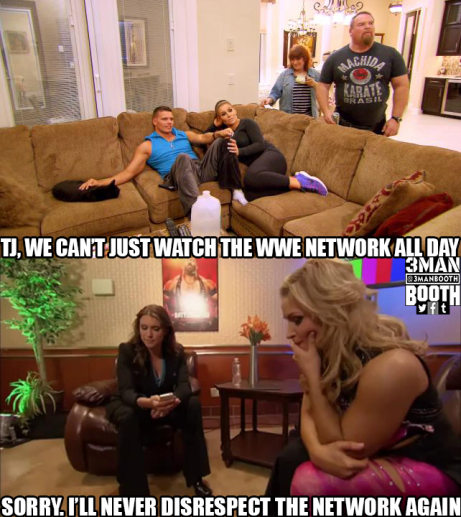 Nattie puts Jenni in charge of food, her Mom in charge of wrangling the cats and her Dad – Jim The Anvil Neidhart – n charge of greeting people.

When you go to a party and this is the first face you see. #TotalDivas pic.twitter.com/jkAXN2bB1A

Nattie gave her Dad the role of "greeter," you know the same role they give the elderly at Walmart. #TotalDivas

The timing is perfect with the WWE being in Florida for Monday Night RAW this week. Backstage, Nattie invites some Superstars to attend: Cesaro (naturally) and R-Truth. R-Truth has a fear of cats though. No, seriously. He was attacked by a herd of cats (a clowder) as a child and has had a phobia (Ailurophobia) ever since. No, seriously! Nattie promises that there won’t be any cats at the party.

"claudio, on wednesday, we're gonna do something to kinda lift tj's spirits up a little bit…"#totaldivas #bte pic.twitter.com/RJpErpjagy

Nattie cracks me up 😂 #TotalDivas

While Tyson is at the gym, Nattie sets up for the party. She hides all the cats into the master bedroom. Cesaro arrives first because he’s Cesaro. Then, Tyson Kidd arrives?
Apparently he ruined the surprise by arriving home early for the party that he didn’t know was in his honor.

#TotalDivas TJ ruined his own surprise party by showing up to it. Now it's a WWE Network and Chill party.

Of course Cesaro is the first to arrive. He's so punctual. #TotalDivas

#TotalDivas Can't have a party without Cesaro

Then, Big E arrives. This causes Jenni to abandon the food she was grilling so they burn a little. She’s too busy becoming Jenn E.

Big E and Jenn E! Reunited (and it feels so good)! #TotalDivas

#TotalDivas Big E's now at the party, getting felt up by Jenn-E. Now R-Truth and Kofi are showing up.

Kofi Kingston arrives with his wife and son, Khi. Oh, R-Truth is there too. Khi knows Nattie’s house is cat den and goes looking for them.

Kofi Kingston has such a beautiful family. #TotalDivas

I liked the party when it was wings and wrestling. Don't let R-Truth ruin it. #TotalDivas

In the process, one of the cats escapes from the bedroom causing R-Truth to jump on the table, then leap from the table to floor and run out of the house!

And just like that. R-Truth ruins the party. #TotalDivas

The cats are re-wrangled, and Truth puts a bunch of chairs and rope in front of the door to secure it. The party can resume!

Everyone is having a good time.

TJ watching Nitro while Anvil is boozing and Truth is on the kitchen counter being scared of a cat. This show is the best. #TotalDivas

Until R-Truth, sitting with Kidd and Cesaro on the couch, asks Tyson how he’s doing mentally. Truth and Cesaro reveal that Nattie said that Tyson’s depressed because of the injury.

R-Truth: You alright? … Mentally?
WHAT ARE YOU DOING, RON!!! #TotalDivas

#TotalDivas Pretty telling that R-Truth, who sees children that we can't see, asking somebody about if someone's okay mentally.

*Everyone's having a good time on #TotalDivas*

R-Truth: You aight, tho? 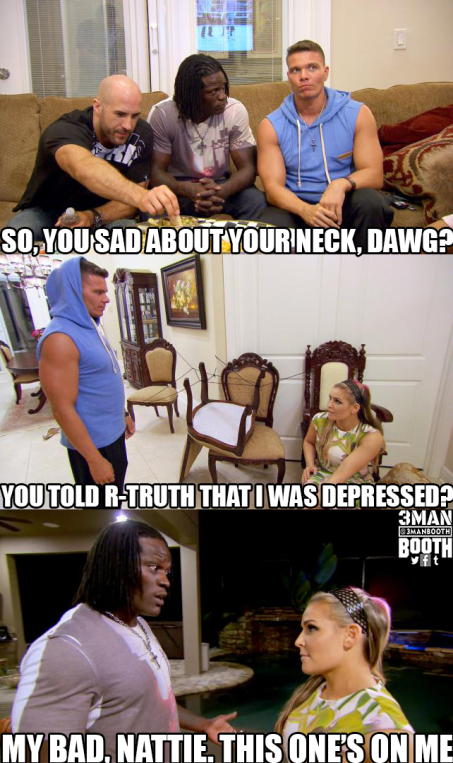 Kidd confronts Nattie about it, Nattie denies saying it and they have a small fight. Kidd doesn’t want people feeling sorry for him. Nattie and Truth have a private conversation about it. He tells her that you can be injured without being depressed. Also, as long as Kidd has Nattie – his best friend – he’ll be in good spirits.

"He got his best friend in the whole world. Cesaro. And he's got you."
– R-Truth #TotalDivas

A few days later Nattie bring Tyson Kidd to the backyard, saying an armadillo made a very large hole in the garden. But Nattie was lying, but for a good reason. She planned a surprise picnic for her and Tyson. She apologies for telling everyone that he was depressed. Tyson says he appreciates all that she does for him and he knows her heart is in the right place.

#TotalDivas Nattie & TJ should have housewarming parties more often, maybe have an intervention with R-Truth to get over his fear with cats.

Nattie on #TotalDivas: I love you.
Tyson: I love you too, Cesar-I mean Nattie.

Backstage at RAW, Mark Carano has a meeting with the Bella Twins. He informs them that a major national food company wants the Bella Twins to be the face of the company. (They won’t say the same but hot girls and burgers? We think it’s Carl’s Junior.) Nikki is excited at the idea of becoming a spokesperson but Brie has reservations. She needs to see if it fits with her beliefs. The Bella starts bickering over the idea.

Back in Arizona, Nikki comes over to Brie’s house. Nikki tries to sell Brie hard on the idea of the endorsement. She’s trying to put a “fitness sexy” spin on it.

Nikki tries to convince Brie by sexily promoting products around Brie’s house like an egg, coffee, and a wheelbarrow.

Wheelbarrows?!? What endorsement did the Bella Twins get anyway? Home Depot? #TotalDivas

Nikki endorsing on #TotalDivas: Do you want an *seductively* Egg?
Brie endorsing: pic.twitter.com/cNTi24yyy3

Ultimately, Brie thinks Nikki needs to cool down so she sprays her sister with a hose.

I can't even deal with Nikki @BellaTwins in this ep… 👀😂 #TotalDivas

Where is Daniel Bryan? ?#TotalDivas 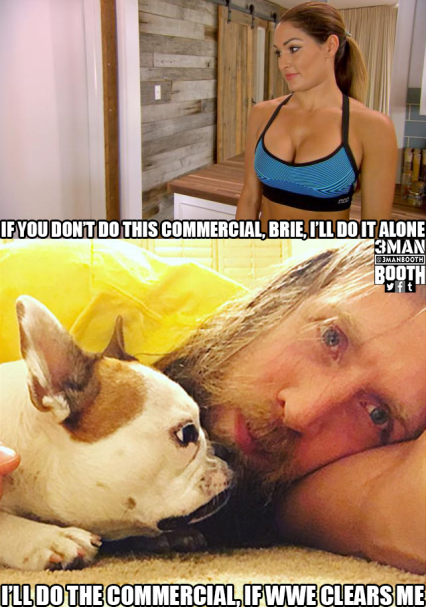 At Nikki and Cena’s house, they are talking over a glass of wine. Nikki tells Cena about the endorsement opportunity. Cena says that she can’t blame Brie for wanting to make professional decisions.

Cena thinks Nikki can do it by herself. Nikki says that Cena has good advice; Cena says he’s been through all this before, you know, as the face that runs the place.

Nikki Bella: Why do you have such good advice?
John Cena: I've been through all this before. #TotalDivas pic.twitter.com/9e82M1FU16

Nikki brings up Cena’s age and Cena realizes he’s 6 years older than Nikki. That means when Cena was 18, Nikki was…yeah.

Cena's face when he realizes he broke the "never date anyone under half your age plus seven" rule. #TotalDivas pic.twitter.com/VZaE0MTANR

Back in Phoenix, Brie is meeting with her Experience Local team, a company dedicated to showcasing local companies and restaurants. Nikki surprises Brie by joining her at the meeting. Nikki realizes that even though her and Brie are identical twins, they do have to respect their differences.

And Nikki seeing Brie do things on her own, like Experience Local, makes her think that she can stand on her own also. She wants to be the female face of the WWE, the Divas’ version of The Rock or John Cena.

Nikki on #TotalDivas: It's time WWE has a female that's like The Rock or John Cena

With the WWE being back in Florida, that means that Eva Marie is also back on the road! This will be the first time Eva sees the other WWE Divas since she started private training with The Brian Kendrick and working in NXT. This also means Eva has some apologizing to do.

She runs into the Nattie on the way into the arena. Nattie is more concerned with being late than Eva’s apology. So far so good.

Eva asks to speak to the Bella Twins in the cafeteria. She apologizes for insinuating that Nikki Bella was a bad Divas Champion. The Bella Twins accept Eva’s apology and agree to let things stay in the past. As a sign of peace, they start following each other on Twitter and Instagram again.

In the middle of Eva’s apology tour, Mark Carano calls for a mandatory Divas meeting, which no one is a fan of.

No matter the industry, Mandatory Meetings are never fun. #TotalDivas

There’s a new Total Diva: Mandy, the runner up from WWE’s Tough Enough!

When you win Tough Enough, but the runner up makes it to TV before you. #TotalDivas pic.twitter.com/IhAaQJj1sv

This is a shock to everyone, especially Paige; Paige was one of the Tough Enough judges who didn’t think that Mandy was ready to be a wrestler. Carano insists that they know what they are doing. Mandy is going to join the other Divas on the road. She was met with a round of… silence.

*All the Divas are pissed about Mandy on #TotalDivas*

Eva Marie sees this as an opportunity to have a friend / ally in the Divas division. She and Mandy bond over the things they have in common: they both have older brothers, they both are Italian, they both are scared of cats and are allergic. They have so much in common that it scares Amanda a little.

Eva Marie is assimilating Mandy's personality. She might be a Borg. #TotalDivas

#TotalDivas Eva and Mandy are sharing all sorts of things that they have in common and Rosa is just sitting there like "I'm pregnant! :D"

Still, Eva suggests that they should team up and come up with cool tag moves. Did they just become best friends? 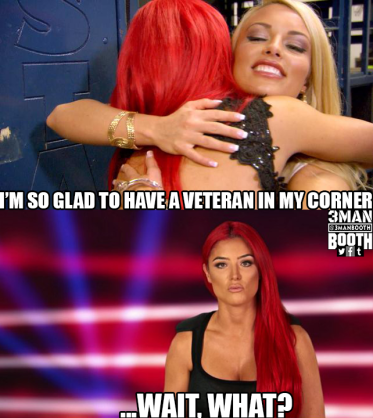 Eva is ALREADY trying to befriend Mandy. She says she gets good vibes. #TotalDivas

Carano gets a car for 5 Divas: The 3 Amigas (Rosa Mendes, Paige and Alicia Fox), Eva and Mandy. After bonding over pet peeves – people licking their fingers and boogers in Nattie’s nose – they pull over. Eva apologizes to Paige. Paige accepts because Eva has been learning how to wrestle.

Back in the car, Paige says they’re turning over a new leaf. Everyone is on board, except for Foxy. She can’t live on ”Sesame Street” with Eva. Eva could’ve reached out several times before so why did Eva wait until now to reach out and apologize. This is a sisterhood and while Alicia has been working on the Total Divas brand, Eva Marie has been working in the Eva Marie brand. And that upsets Foxy. 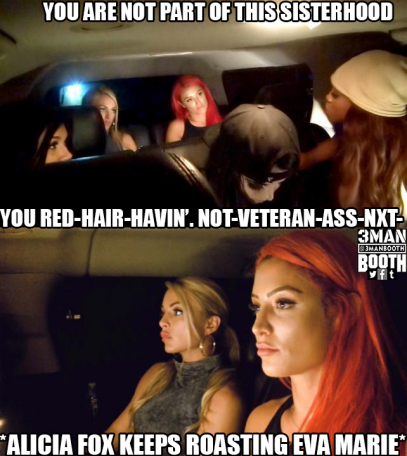 Eva on #TotalDivas: I'm glad all the drama is behind us-
Alicia: I hate you! You're the worst! This is a sisterhood! YOU ARE NOT ONE OF US!!

#TotalDivas Alicia Fox LAYING INTO Eva Marie. Not sure what's in that Red Solo Cup but it's a truthbomb mixture.

The Divas go to the Total Intensity makeup factory for a future line of Total Divas inspired makeup. On the tour, Mandy spends some time with Foxy. She asks for some advice. Foxy tells her to be careful. Everyone gossips. Also, Eva is still new to wrestling. Mandy wonders if she made a mistake? Did they just un-become best friends? 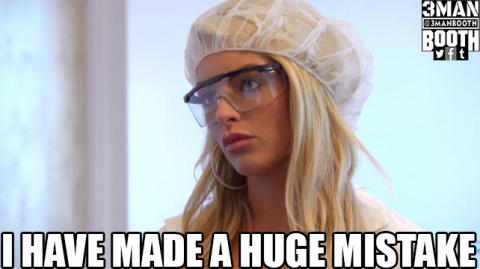 Mandy please get away from Eva#TotalDivas

Amanda should talk to Jojo about what it's like to be paired with Eva Marie. #TotalDivas

That’s it for Total Divas! See you next week!