Posted on October 2, 2015 by keepitfivestar

RAW begins with the return of the John Cena U.S. Open Challenge.

WWE #RAW is starting with a match? A real match? Do you mean it?!? #USTitle

John Cena does his usual speech about the U.S. Open Challenge.

This is the best kind of John Cena: #USOpenChallenge John Cena! #RAW

John Cena calls out his next challenger, which ends up being The New Day. Xavier Woods plays John Cena’s theme music on the trombone.

Brasswind Intro John Cena is the best John Cena! Because it's THE NEW DAY! #RAW #USOpenChallenge

ALL THE BELTS FOR THE NEW DAY! #USOpenChallenge

Big E says the New Day is here to make things great again. Big E hypes the MSG show this weekend and how they will be rid of The Dudley Boyz. Big E. informs John Cena that they’re here to accept the open challenge. Big E gives John Cena a new catchphrase: Hustle, Loyalty and Booty

I think Big E might have a problem. He can't. stop. gyrating. #HustleLoyaltyBooty #Raw #NewDay #USOpenChallenge

The New Day keeps hyping their upcoming match against John Cena. Kofi Kingston hypes the idea of The New Day as the U.S. and Tag Team Champions AT THE SAME DAMN TIME.

They're complete clowns and I love it.

Kofi says they’re gonna be Scrooge McDuck because after the match against John Cena, The New Day will be swimming in gold.

none of you got the future reference but whatever

John Cena stops the fun by telling New Day that if they don’t take this seriously, he will beat all of their asses. Xavier Woods is chosen.

The first hour of #RAW could be New Day picking which one faces John Cena in the #USOpenChallenge and it'd be amazing.

Xavier Woods tells John Cena that he will get Lost In The Woods.

#RAW Xavier taking the challenge? who's gonna handle the ritual of match tromboning?

Anyone else laugh when @XavierWoodsPhD said John Cena you bout to get lost in the woooooooooods? #USOpenChallenge

John Cena is not having it.

When it's morphin time. #raw pic.twitter.com/Yim96boLw1

Wow, who allowed John Cena to be serious for a moment? 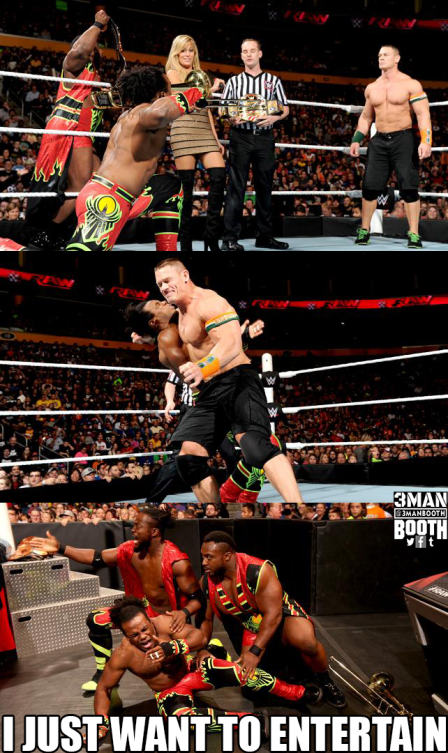 "You don't take me serious?" Says the guy literally dressed as Gatorade. A giant bottle of Gatorade. #RAW #SillyCena

i would be SO MAD if i was the champion of the United States and some man was calling me “BOOTY.” #straightshoot

You would think John Cena, the man who rapped before every match 12 years ago, would appreciate Xavier Wood's music. #USOpenChallenge #RAW

The referee ejects The New Day.

The New Day didn't do anything wrong! Somebody call Clarence Mason! Get this rectified. #USOpenChallenge #RAW

Big E and Kofi ejected from ringside and the worst part is… Xavier Woods couldn't even play them off! #RAW #USOpenChallenge

Damn, what a Batista Bomb! #RAW

Xavier Woods does an Eat Defeat to John Cena

Eat Defeat! Use all the moves you saw in TNA, Xavier! Do the Eye of the Storm next! #RAW #USOpenChallenge

New Day are real homies, they come to the help of each other. Cena knows nothing about that.

Luckily for Cena, The Dudley Boyz make the save.

Cena and the Dudleyz! Too bad Nikki Bella threw out all of Cena's Camo Jorts! #RAW #USOpenChallenge

I smell a tag match

Now it’s a six-man tag: The Dudleyz and John Cena vs. The New Day

OH SWEET GOD! That was a car crash! #RAW

Devon took out Big E AND John Cena with one move! #RAW

New Day wins an impromptu 6 Man Tag. That means Xavier Woods gets another shot at John Cena's US Title! It's only fair! #RAW

Ashley from HR is gonna get Katie Vick'd by Kane. #RAW

They brought in HR? This is not gonna end well. #RAW

Stephanie and Triple H are acting like true Executives: Get someone else to do it. #RAW

Kane is introduced to Ashley from HR. Ashley is going to give Kane an evaluation to see if he’s qualified to be the Director Of Operations. Ashley says she got an anonymous tip from a WWE Superstar. Right on cue, Seth Rollins shows up surprised that Kane has to go through this.

That's not the same Ashley I used to see on #RAW… pic.twitter.com/a5I430tyxr

Backstage, Dean Ambrose tries to talk Roman Reigns out of his match with Bray Wyatt, but Roman Reigns says he doesn’t care. Reigns says Wyatt started it, so he’s going to finish it. Ambrose lets Reigns know that if the other Wyatts try anything, he will come out of hell swinging. Reigns tries to get Ambrose to ask Randy Orton for assistance, but after the Jericho incident, Ambrose doesn’t want any help. Orton hears this and reminds Ambrose and Reigns that once they’re done with Bray Wyatt, he’s next.

Ambrose: After Jericho, I don't want Orton or any outsiders-*Sees Orton* Orton: *Holding a tray of Best Friend Cupcakes* …Oh…#RAW

Mark Henry vs. Big Show is next.

Do you hear that? That's the sounds of remotes clicking all over the world due to Big Show vs. Mark Henry on #RAW pic.twitter.com/4wF6exKXOk

You'll never get enough sponsors for the Hall of Pain at this rate, Mark Henry! #RAW

#RAW Heyman "Hey Brock, think you need to tell the world how much of a challenge facing Big Show is?" Brock "…" Heyman "good point"

Up next is MizTV with Charlotte and Becky Lynch:

#MizTV is the best worst segment in the WWE. #RAW

The Miz summarizes the drama between Team PCB, Paige and Natalya, then introduces Becky Lynch and Charlotte. 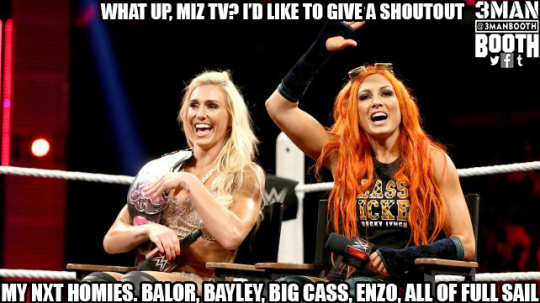 The Miz tries to bring up the last time Team PCB was at MizTV, but Becky Lynch quickly shuts Miz down for being a sexist, chauvinistic pig. Becky threatens to slap Miz’s attire off of him. Miz corrects Becky saying it’s an “Infinity Scarf.”

Becky Lynch trying to justify the use of goggles in her wardrobe. Miz is not buying it. #RAW pic.twitter.com/CYYWKSzpVD

Charlotte demands Paige come down to the ring to settle this, but The Miz gets mad that Charlotte is inviting people on his show. Becky Lynch comes up with a quick way to get The Miz to stop talking.

Becky, that was a good throw but you have not been on #RAW long enough to reach "mic-throwing" status.

Team Bella comes out instead. Nikki feels bad for Charlotte, saying that because of this drama, it’s only a matter of time before Nikki Bella is the Divas Champion. Charlotte tries to tell Nikki Bella that it’s not about her, but Nikki says as long as Charlotte has the title, it is about her. Nikki says she agreed with most of the stuff Paige said, but she doesn’t agree with the idea that Paige started the Divas Revolution. Nikki claims she’s the one who started the Divas Revolution. 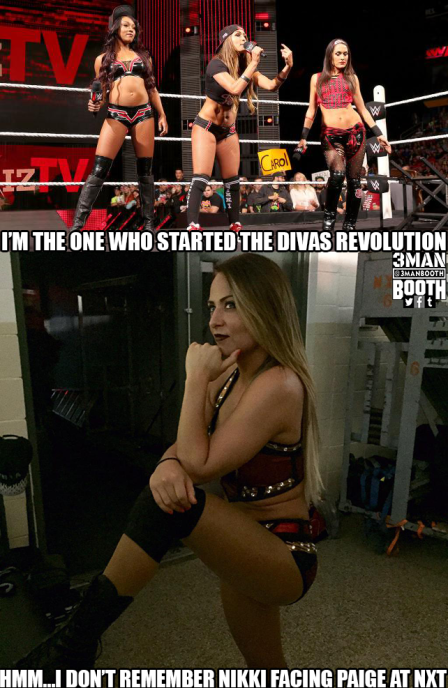 Why does Nikki Bella talk like Dora The Explorer? #RAW

Pretty sure The Miz started the Divas Revolution with that infinity scarf. #RAW

Charlotte says it’s not about who started the Divas Revolution, it’s about the people in the crowd, at home and the Divas believing in themselves.

Charlotte has a point re: #DivaRevolution. Also, AJ Lee started it. That is All. #RAW

Paige tells Nikki Bella that Charlotte and Becky Lynch wouldn’t be on TV if it wasn’t for her. Paige says she’s the one who put NXT on the map. Nikki calls out Paige for being petty and tries to get Team PCB to attack Paige. Nikki says, when you have friends like Paige, who needs enemies. Paige retorts with if you have two boyfriends like The Bellas, who needs ambition.

Paige to The Bellas on #RAW: And when you have two boyfriends like yours, who really needs ambition? pic.twitter.com/6pIWSycyk4

Paige on the Mic #RAW pic.twitter.com/MP9m16oaxj

A brawl breaks out and we have another six Person tag.

How is Paige back teaming with them? I hate you WWE.

Omgomgomgomgomg stop putting all these divas together!!! #RAW

During the match, Paige accidentally gets knocked off the apron.

Paige walks away from Team PCB, but Natalya tries to stop her. Natalya gets on the apron and tries to be Charlotte and Becky Lynch’s partner.

*Natalya comes out on #RAW. Scolds Paige for leaving then tries to take her place in the Six Person Tag* pic.twitter.com/w7M2dCbkea

That's a shame. Nattie's been away from a wrestling ring for so long, she doesn't know how tag matches work anymore. #RAW

NATTY NEEDS TO CRACK SOME SKULLS

The Bellas take advantage and win the match.

Seth Rollins before he opens the box on #RAW pic.twitter.com/rCZ0shifyR

THE HEAD OF JAMIE NOBLE! #RAW

Kane knew how much it meant to Seth Rollins, so he dug it up and got it for him. Rollins told Kane to keep it. Ashley from HR considers this thoughtful, so Kane decides to give the box to her.

Luke Harper and Braun Strowman vs. The Prime Time Players is next.

SWAMP GAS is back! #RAW

INTENSE HUG for the win. #raw

if i was braun strowman’s size, i’d be the king of the world by now, and have bullied someone into building a working moon colony.

Neville vs Stardust continued their rivalry.

Neville versus Stardust: Loser has to bag and board the other's comics. #RAW

Why is Stardust wearing the gloves from the Mom on Dexter's Laboratory? #RAW pic.twitter.com/fR2tXSDBzN

Until King Barrett made his return.

BULLHAMMAHS is for everyone! #RAW

King Barrett takes the mic and says, “All Hail The Return Of The King.”

All hail the return of the King pic.twitter.com/eK2VhNqQCY

"And THIS is why villains don't team up on #Gotham!" – (Clock) King "Bad News" Barrett #RAW