Posted on August 7, 2015 by keepitfivestar

RAW begins with a 10 bell salute to Roddy Piper and a tribute video.

The waterworks have already started. I can't.

#RIPRoddy. I hope Mrs. Hart is makin' them sandwiches, slappin on that bologna. Only one piece of bologna, but it don't matter! You'z hungry

After the tribute and intro, Seth Rollins comes out with a Never Shuts Up Shirt.

A “Thank You Rollins” Chant breaks out.

If Rollins had followed up and hit Cena with his left knee, he would've put the nose back in place. That's how surgery works, right? #RAW

Seth Rollins gets another “Thank You Rollins” chant.

Wow. I guess the WWE Universe is full of cruel bastards tonight. #Raw

GIVE THAT MAN A ROUND OF APPLAUSE! #RAW

Seth Rollins calls it disgusting because he felt John Cena’s nose crack on his knee. Rollins talks about the pop when his nose shattered. Rollins says at first he didn’t feel bad because that happens in a WWE ring. Rollins says Cena’s face isn’t the first that he smashed and it won’t be the last, but this is the first time that he broke the face of the man who loved the place.

Hate John Cena all you want, but that nose has a family dammit! #raw

Seth Rollins talks about feeling bad for John Cena, but then says he lost the match because he felt sorry for him. Rollins vows to never let that happen again.

#RAW Seth Rollins is blaming the fact that he tapped out to Cena because referee Chad Patton isn't a humanitarian.

Seth Rollins has a proposition for John Cena. Rollins knows Cena is at home, and that he looks like a cross between a Picasso painting and a raccoon. Rollins challenges Cena at Summerslam, Title vs. Title, Winner Take All!

NO dammit, you dumb dumb.

Seth Rollins wants ALL THE GOLD! He already picked up the IC Title on his way out! #RAW

I'm going for Cesaro to answer the challenge.

Jo Jo asks Seth Rollins if this title match is legitimate. Rollins says it is, he has two conditions. The person has to be under 6ft and 200 pounds.

This is your time, Kalisto! Get that title shot! #RAW

Neville has put in some serious work in the open challenge department.

If Kofi Kingston doesn't skip down that ramp to accept Rollins' challenge I will be so disappointed. #raw

I guess Jojo is answering the Open Challenge….. #RAW

#RAW SETH ROLLINS IS CALLING OUT EL TORITO FOR A TITLE MATCH!

Neville comes out instead. 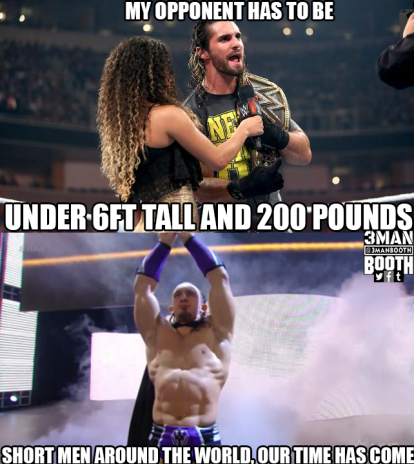 Pretty sure Kalisto is under 6 feet and 200 lbish… #RAW

El Torito is actually inside Neville driving him like a robot. I don't know if I like Seth Rollins' odds here. #RAW

If Rollins breaks Neville's nose, he should be sponsored by Tom's Rhinoplasty from now on. #RAW pic.twitter.com/TSeT1LwuyE

Neville does a Corkscrew Moonsault to Seth Rollins

Neville with a Corkscrew Moonsault onto the outside! #RAW

That was POWER by Neville! #RAW #SuplexTown

The way Neville hits those German Suplexes makes me think that he would do great at a Jamaican Dancehall Club. #WWEChampionship

Neville continues great offense and almost gets a 3 count.

Come on, Ref! No hesitation! #RAW

HOLY CRAP THE HEIGHT ON THAT HEAD SCISSORS! #RAW

This is AWESOME #RAW

Neville is the guy you tell your gf to watch when you wanna trick her into liking wrestling. #RAW

Neville hits the Red Arrow on Seth Rollins, but Rollins gets a foot on the rope.

That was insane! Rollins' foot made it to the rope! #RAW

Once again, the WWE Universe proves to be absolutely useless and end up crushing another person's dreams. Sorry, Neville. #WWEChampionship

Neville vs Rollins. This will be our WWE. The future is here. #RAW

Match 02: Los Matadores and The Lucha Dragons vs. The Ascension and The New Day

Say what you want, The New Day has one of the best entrances on #Raw! #WWE #NewDayRocks pic.twitter.com/njZRH02zFk

The Prime Time Players are on commentary.

Xavier Woods is basically the urban version of the two old guys from The Muppets. #RAW

The New Day does the “What Are Those” reference to Kalisto.

i wish my life could be narrated by Xavier Woods & Titus O’Neil. #STRAIGHTSHOOT

After a competitive match, Kofi Kingston catches Kalisto with the Trouble In Paradise

#RAW DANG! Trouble in paradise with Kalisto on the top rope!!?!?

Winners: The New Day and The Ascension

Post-Match, The New Day and The Prime Time Players argue.

The Powerpuff Girls are up NEXT @MsCharlotteWWE @RealPaigeWWE @BeckyLynchWWE #RAW

Only thing worse than Becky’s steampunk gear would be if Charlotte dressed like a My Little Pony. #STRAIGHTSHOOT

Nikki Bella says the Divas Revolution has been in effect for 253 days, ever since she won the Divas Championship. Nikki says for those who think they have what it takes, remember where it started. Team Bella says Team Bella is the Brand.

I could live the rest of my life without having to listen to the Bella's encourage one another. #WWESanJose

After a spear, Charlotte locks Nikki Bella in the Figure 8.

#SubmissionSorority for the win! I already need the shirt! #RAW

With that Figure 8, Charlotte has now defeated more people than Flair did with the figure 4 in the last 2 decades. #RAW #DivaRevolution

Backstage: Jojo asks Team B.A.D their thoughts on The Submission Sorority. Sasha Banks reminds Jojo that last week, she made Paige tap out. Naomi says it’s time for Team Bad to make another statement. Naomi challenges Paige tonight. Naomi brings up Ronda Rousey, saying that they’re the baddest women on the planet. Not her.

SHE DID NOT JUST CALL RONDA OUT. I can't omg #RAW #DivaRevolution

We don't recommend calling out Ronda Rousey, Naomi. She qualifies for both Submission Sorority AND B.A.D. memberships! #RAW

Naomi mocks the Submission Sorority name, then says she’s sending Paige back to Freak Island. Naomi pats Jojo on the head, then walks off. Tamina stares Jojo down before leaving.