Tonight, #RAW is in Montreal. It's like a regular #RAW except covered in gravy and sprinkled with Cheese Curds!

Who knew Montreal loved Randy Orton so much? #WWEPayback #RAW

Randy Orton calls Payback a fitting name for a PPV because Payback is what he’s going to get in 2 weeks against Seth Rollins. Randy Orton brings up the triple-threat match at Payback with Seth Rollins and Roman Reigns. Orton says Reigns will feel bitter disappointment, but that’s not his problem because Orton is walking out of WWE Payback as WWE Champion.

Randy Orton likes saying things 3 times. What if he's had OCD this whole time instead of IED? #RawMontreal

Randy Orton says there’s not a damn thing Roman Reigns or Seth Rollins can do about it, until he’s interrupted by Roman Reigns.

I hum the Roman Reigns theme song every time I walk down NYC subway steps. Every. Single. Time. #RAW

Roman Reigns must have blueprints of every arena so he knows where he can walk down from. #RAW

Roman Reigns tells Randy Orton that everything he said isn’t going to go down like that. Reigns says if anyone is getting Payback against Seth Rollins, it’s him. Reigns is drowned out by a loud RKO chant. Reigns tells Orton that the fans don’t fight for him.

This crowd is very PRO-RKO. #RAW

Randy Orton tells Roman Reigns he’s going get “Payback on Payback” then asks is he just gonna stand there and watch Roman Reigns do it. Roman Reigns tells Orton can do what he wants, but if he gets involved, he won’t be standing.

#RAW Reigns: "If you come near me, you won't be standing" | Orton: *Steve Austin Face*

Roman Reigns brings up his past with Randy Orton and Orton reminds Reigns that he is a 12 time WWE World Heavyweight Champion, who has also been in 12 consecutive Wrestlemanias.

"No one like a Gloater, Orton. You don't see me talking about winning the 2015 Royal Rumble and headlining Wrestlemania" – Roman Reigns #RAW

Randy Orton asks Roman Reigns how many Wrestlemanias he’s been in and how many World Title Reigns has he had. Orton tells Reigns has a lot of catching up to do, but Reigns reminds Orton that he beat Orton at Summerslam. Reigns says he has no problem beating Randy Orton one more time and winning the WWE World Heavyweight Championship. Randy Orton and Roman Reigns are interrupted by The New Day.

Who's idea was it to bring these idiots out? #Raw

#RAW Is Orton jamming to the New Day theme?

Okay, Orton bobbing his head to New Day's music has me turning a corner on him. #RAW

.@RandyOrton I'm sorry for everything mean I've ever tweeted about you after your reaction to New Day's song. You're beautiful. #RAW

Xavier Woods tells Randy Orton and Roman Reigns that all this negativity has to stop, but is interrupted by a New Day Sucks” chant. Xavier Woods says since The New Day are the only champions out here, he feels the burden falls on them to spread the Power Of Positivity. Kofi Kingston chimes in saying P.O.P, holdin’ it down.

You down with P.O.P? YEAH YOU KNOW ME! #WWEPayback #RAW

Kofi Kingston: P.O.P. Holding it down! Randy Orton: I'm going to RKO you so hard… #RAW

Xavier Woods tells Orton and Reigns that they’re negative and no one cares about their “Montreal Boo-Hoo” job. Woods says those days are over and today is a New Day.

Kofi Kingston reminds Randy Orton and Roman Reigns of their past failures against Seth Rollins, but says what’s in the past is in the past because today is a New Day and New Day Rocks.

Ooooh! Got Him! #RAW

Why is Randy Orton head bopping and clapping along? He's practically giddy! #RAW

New! Day socks! Where they at @WWEShop?

More New Day on the mic, please. Thanks. #STRAIGHTSHOOT

Someone in the New Day NEEDS to answer Cena's US Title Invitational. #STRAIGHTSHOOT

Match 01: The New Day vs. Randy Orton and Roman Reigns

Orton & Kingston have so much chemistry. Great to see them in the ring together again. #STRAIGHTSHOOT

Roman Reigns just did a "cool walk" after that catch Samoan drop. He's got that famous Montreal groove. #RAW

The New Day gets the advantage.

The New Day have the Numbers Game. Roman Reigns SHOULD know something about that. #RAW

Everyone is using the tag rope. That makes me so happy! #WWE #RAW

#RAW LOLOLOL AT THE CM PUNK CHANTS DURING THIS MATCH pic.twitter.com/to6Tm23aAs

Randy Orton gets the hot tag.

Xavier Woods tries to stop Randy Orton but gets hit with an RKO.

RKO to Woods now do it to the other two as well!! #TheViper #Raw

Kofi got his win back!!! #Stupid

Post-Match, Kane tells Roman Reigns and Randy Orton that there is no shame in losing to the WWE World Tag Team Champions and if their evening was ending, they could leave with their heads held high. Kane says he sees Orton and Reigns still have tension and he wants to exploit that. Kane makes Randy Orton vs. Roman Reigns the Main Event for RAW tonight because it’s “Best For Business.”

Backstage: Kane walks by as The New Day continues to celebrate.

The New Day randomly looking for a positive reaction from Kane was funnier than it should have been. "WE DID IT, KANE!" #WWE #Raw

Kane bumps into Seth Rollins, who tells Kane that it’s funny that Kane thinks that putting Roman Reigns against Randy Orton will make a difference. Rollins calls Kane a spoiled rotten kid who has been bad but is trying to make amends to impress Santa Claus. Rollins says The Authority will be back and he will have to answer to them.

Seth Rollins acting like the rich kid whose parents own the town so he could get his teacher fired. #RAW

Kane says he can’t relate to Seth Rollins’ Santa analogy because he used to sit in a chimney and wait for Santa to show up so he can burn his testicles.

Kane says he can’t have Seth Rollins, the WWE Champion, not having a match when his opponents have a match tonight. Kane makes a match between Seth Rollins and Dean Ambrose tonight with J & J Security banned.

Kane and Seth Rollins have the same conversation every week. The question is, Who is stuck in a Groundhog's Day Timeloop: J or J? #RAW

Seth Rollins argues with Kane, saying he’s beaten Dean Ambrose already, and that Dean Ambrose is just going to try and soften him up for Payback. Kane suggests Rollins wrestle with one hand tied behind his back, or tied to the post or his ankles tied together.

SETH TIED TO THE RINGPOST! I APPROVE OF THIS! #RAW

And your balls will be getting toasty Seth. Dont let Rollins tie you to the ring post. #RAW

Kane tells Rollins to say one word and he will change the match to one of those stipulations. Rollins almost speaks, but decides to storm off instead.

Kane went big momma by with that ONE MORE WORD. #RAW

Ambrose vs Rollins and Reigns vs Orton. The main events are stacked tonight. #raw

Let's not gloss over the fact that Kofi Kingston, Xavier Woods and Big E beat Roman Reigns AND Orton. Not in WWE 2K15. In a Match on #RAW!

Ryback says he doesn’t know why Bray Wyatt did what he did, but he is no stranger to facing fear. Ryback tries to talk but gets drowned out by Goldberg chants. Ryback responds that he loves Goldberg too and if you ignore the chant, the fans just keep doing it. The fans start chanting “Feed Me More.”

Ryback says Feed Me More. So I went to the kitchen and made myself an ice cream sundae.

Ryback starts talking about his injury and how top doctors said he will never wrestle again. Ryback says he has had to face fear before and takes fear and negativity, and turns them into positives. Rybakc says he wakes up hungry to be the best and to be a rolemodel for kids. Ryback continues talking about what motivates him and then starts a “Feed Me More” chant.

I don't think Ryback is a good hero to children. His solution is to eat his problems. #RAW

Ryback says he does this for the WWE Universe and says life is about doing your best and coming out and screaming “Feed Me More.” Ryback tells Bray Wyatt that he doesn’t scare him, but he woke Ryback up and Ryback is starving. Ryback tells Wyatt that he’s starving and it’s feeding time.

Ryback kicks ass on the mic. Haters be dammed

Imagine Baby Ryback saying"it's feeding time" to his mother. It's adorable and terrifying at the same time. #RAW

Ryback gets interrupted by Bray Wyatt.

Bray Wyatt tells me to run? Hahahahaha hahahaha!….See Ya! 😳 #Raw

So, the Wyatt and Ryback feud is based off of fear of food? Or a scared little boy? Or Goldberg? I'm lost. #RAW

Still not convinced Bray Wyatt is actually talking to The Ryback. Renee Young was in the ring too you know? #RAW

Match 02: Tyson Kidd and Cesaro vs. The Ascension

Someone at WWE Studios falling down on the job that @NatbyNature doesn't have a cameo in MAD MAX. #STRAIGHTSHOOT

I forgot Ascension was a "thing."

Every time The Ascension comes out, I laugh because of their corny crouch-down entrance. #RAW

How far in the future is that Ascension? lol #RAW

How is The Ascension talking smack about The Hart Foundation a "treat," Michael Cole? You need a dictionary, man! #RAW

Really, @ViktorRiseWWE & @KonnorWWE should be in MAD MAX too. Hell, everyone in this match. #STRAIGHTSHOOT

Cesaro gets the hot tag and destroys Viktor with uppercuts.

CESARO IS A BEAST! #RAW

Cesaro is stuck in a loop again…#RAW 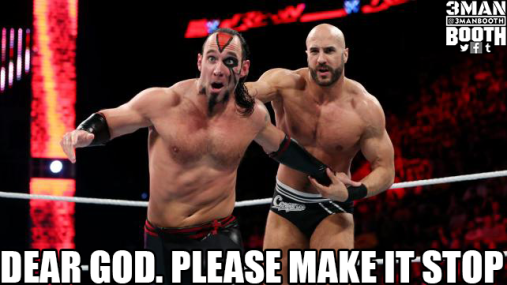 Cesaro gave Vicktor three million uppercuts, then a deadlift, then he swung him. And he's not even tired! What a beast. #raw

The UpperCats are Back! #RAW

Look how happy Cesaro and Tyson Kidd are! #RAW

"Can we go back to Florida? Things were nice down there." – Konnor & Viktor #RAW

Backstage: Renee Young asks Seth Rollins about his reaction tonight against Dean Ambrose. Rollins tells Renee that there is no point to having this match and secondly, Kane is a moron. Rollins walks off.