The Barclays Center has unofficially been Shield Central since TLC 2012; that’s where Rollins, Reigns and Ambrose had their first actual match in the WWE. Even though The Shield is disbanded, the Barclays Center has remained loyal. So when Dean Ambrose unleashed his “lunatic fringe” on RAW last week, we were there with him. 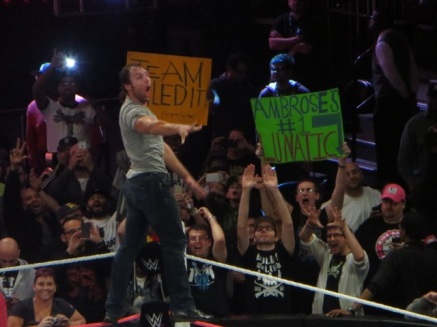 Ambrose was more looney than lunatic this week. He knows that Seth knows every move in the Shield play book. That’s why Dean has either been making everything up on the spot or pulling from another play book: the Bugs Bunny catalog. Dean casually appeared in the crowd next to Seth just to attack him. He left RAW, only to come back pushing a hot dog cart. He then proceeded to attack KANE and Randy Orton with ketchup and mustard!

It wasn’t all food fights on RAW. As favorable as the Brooklyn crowd was to Ambrose, they were the opposite for Kathie Lee and Hoda Kotb. Those two appeared alongside Adam Rose for… well, we don’t know. They were booed so loudly that we couldn’t hear them. So here’s a picture of the Rosebuds instead.

And Finally, FINALLY we get to The Rock, who made a surprise visit. The WWE Universe – Brooklyn sector – were electrified by the appearance of the Great One. NO ONE SAT DOWN!

And while The Rock took credit for the Derek Jeter chant (it was the guy behind us; he started it during the Brie Bella / Summer Rae match) it’s okay: he’s the People’s Champ!

Brooklyn showed its appreciation for several Superstars like Dolph Ziggler who rocketed around the ring fueled by the cheers and “We Want Ziggler” chants he received. Or Damien Mizdow who, as The Miz’s stunt double, mimed the A-lister’s match against Sheamus. He was, honestly, more entertaining to watch. It was the perfect amount of weird for this Brooklyn crowd, unlike the El Torino / Gator match. “This is Stupid” chants broke out during this match. Maybe the subtlety of putting a bag over a gator’s head and rubbing it’s belly until it falls asleep were too small to see in person. Still, everyone had a great time. Scratch that: everyone but Kathie Lee and Hoda. Check out our photo gallery on Facebook!