I hate myself for even knowing a few words to Steph's entrance music. I blame @KeepItFiveStar. #RAW

#RAW DAYMN! Did Steph see a doctor for someone a little more than that food poisoning? #BillionDollarBoobjobSequel

Stephanie McMahon says as a Principal Owner of WWE, the one thing she can’t stand is gross negligence. Stephanie brings up Vickie Guerrero being unable to get her a good cup of coffee next week, then asks Vickie Guerrero to come out and face the consequences. Vickie Guerrero comes down to the ring.

That was not cool

Stephanie is her father's daughter, isn't she?

Where is Jericho to cut a promo on Steph's boobs…

As if you thought Steph didn't take after her father enough, she's encouraging an employee to get on their knees and beg like a dog. #RAW

Oh! Vickie is bringing out her WARRIOR Side!!! (Guerrero is Spanish for Warrior)

Yeah u tell her Vickie! #RAW

OHHHH! THIS RAW GOT REAL!

Not going to lie, felt a little teary when she talked about Eddie

#RAW D. C. CHANTING FOR VICKIE, MIGHT'VE BEEN THE FIRST POSITIVE CHANT FOR HER EVER.

I hope Vickie Guerrero comes out to the Eddie Guerrero "Gangsta Lean" music.

Luke Harper and Erick Rowan come out to new music. 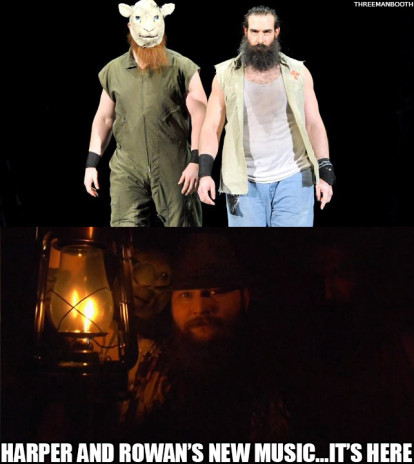 What the hell is this? #Raw

For a second, I thought I was sitting in the Pirates Of The Caribbean ride at Disney World. #RAW

Well, it legit gets no more creepier than this.

…I didn't think they could make The Wyatt Family any creeper, but they did.

Post-Match, Jey Uso calls out Erick Rowan saying they’re just starting to get “Uso Crazy.” Jey wants Rowan to get his “stinky ass” back, so he can kick it all over the ring. Jey Uso dives on Luke Harper and Erick Rowan.

Rowan does got a stinky ass though I bet. #UsoCrazy

Rowan is, what one might call, a big burrley bastard

Damn it Rowan, you had one job!

So the Usos and the Wyatt Family are 1 – 1 for the night. Is this like World Cup Rules? Does this mean Rybaxel Advances?

#RAW THANK YOU WHATEVER USO YOU ARE FOR WINNING THE MATCH SO I DON'T HAVE TO HEAR THAT AWFUL ORGAN MUSIC.

Luke Harper and Erick Rowan switch their focus back to Jimmy Uso and start to attack him. Jimmy Uso gets taken down with a clothesline.

Harper just kicked that Usos face right off his face!

Bray Wyatt appears on the titantron.

Bray Wyatt tells Luke Harper and Erick Rowan that he’s proud of them and that a leader who does not glorify the triumphs of his family is no leader at all. Wyatt says he and his brothers look down upon creation, and soon the WWE Universe will see him climb the majestic ladder. Wyatt claims his victory will bring forth a glorious new era in which The Eater Of Worlds will be crowned champion of all the desperate needy souls.

Harper and Rowan are looking up at Bray Wyatt like hes Zordon or something. #wwe #Raw

Bray Wyatt says he will not be alone in victory, since Luke Harper and Erick Rowan will annihilate all the unworthy little creatures. Wyatt says united in splendor, The Wyatt Family will roam the world like giants, casting out the light of their message. Wyatt ends the promo with Follow The Buzzards.

RAW is organized chaos right now. Uso/Wyatt 1 into Uso/Wyatt 2 into Bray Wyatt sermon. I like it.

I Hope Lana and Rusev send Vladimir Putin a "Wish You Were Here" Postcard from the Capitol.

#RAW RUSEV VS BARACK OBAMA AT MONEY IN THE BANK, BOOK IT! #RusevHatesBlackThings

Lana says the US Landmarks and Government, and America in general are pathetic. Lana tells America to wake up and that they are embraced with one option: To bow down and embrace a true leader like Vladimir Putin. Lana says you can’t “Ask What can your country do for you? When America can’t even help itself.”

"Rusev CRUSH!" - Lana directing the weird fetish videos he'll do if wrestling doesn't work out for him. #RAW

Paige comes out for commentary.

Hide your everything, here's Alicia Fox!

Really Michael Cole? "Crazy as a Loon?" That's How You're Describing Alicia FOX?!?!

The Funkadactyls theme plays next.

Paige calling Alicia Fox "Crackers" is your new Slang, Everybody!

Who thought putting Cameron on commentary was a good idea!?!?!?!

I wonder if Naomi versus Alicia Fox is Cameron's new favorite match.

Cam'ron: If this one (Paige) would stop talking… PAIGE IS THE ONE ON COMMENTARY, YOU MORON! SHE'S SUPPOSED TO BE OUT HERE!

Queen of the Backbreakers, Alicia Fox!

"If People Are Talking About It, That Means You're Doing Something Right." Cameron, you know who else said that? OJ SIMPSON

I'd rather hear R-Truth rap than listen to Cam'ron say another word. Yeah I said it.

I can't wait for Naomi versus Paige on the big stage, meaning RAW or PPV!

That whole segment was just about as confusing as to what species of animal Cameron's boyfriend Vinny is. #RAW

Can we see Naomi versus Paige in a "Girl Bye" match? No matter who wins, CAMERON LEAVES!

I feel Naomi turns into the Kermit Meme anytime she's around Cameron.

"You callin' her rookie but you can't do a German Suplex. Did Miss Sandra make this tea?" pic.twitter.com/AC9f1LuuPT

Roman putting #fella in his place!

Bo Dallas gets more wet with each appearance. #RAW

Bo Dallas tells Titus O’Neil that last week, he fell off his horse, but that didn’t stop him because he got right back on, then fell off again. Dallas says that tonight, he’s going to prove to everyone that all he has to do, is Bolieve.

What a satanic person. #BOLeave #RAW1100

Why is Titus O'Neil so angry? Bolieve and Make It A Win are pretty much the same thing.

This is gold. #Ra

Journey to Bo Dallas: "We Sued Glee and We'll Sue You Too." #StopBolieving