Posted on June 4, 2014 by keepitfivestar

RAW kicks off with Evolution.

Evolution looks like they just got done filming The Hangover. Spoiler Alert: Ric Flair is on the roof.

Batista is dressed like it's his first day substitute teaching at an inner-city high school, working as an undercover cop. #RAW

Batista is dressed like a generic 90's movie henchman.

Triple H says they say it’s always darkest just before the dawn. Triple H says The Shield and the WWE Universe think they’ve won and that this is over, but they don’t get it. Triple H says he doesn’t lose. He never loses and that he always wins.

Evolution look like they just walked out their mother's room after an ass whipping, trying not to cry. #Raw

Triple H says this won’t be over until The Shield exists no longer and that happens tonight.

Triple H is itching to get his return win. 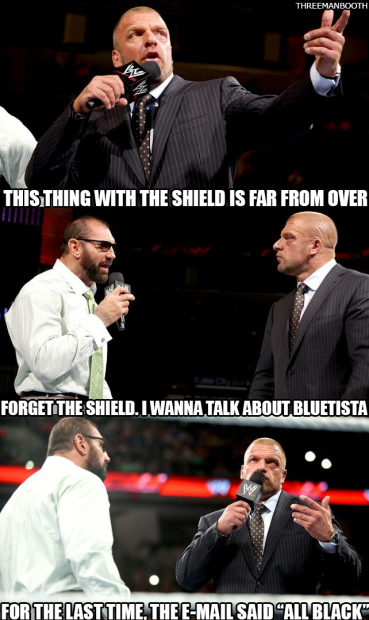 Batista takes the mic and says he doesn’t want another match with The Shield. Batista wants his WWE World Heavyweight Title Match tonight. Triple H takes another mic and says there’s a reason why he’s the boss, and that is because he sees the bigger picture. Triple H says there’s a plan, but Batista doesn’t care about the plan. Batista says he earned a one-on-one Championship Match and he wants it tonight.

Uh oh the reunion honey moon phase is over #raw

HHH talks about finishing fights, and always winning. DIdn't he try to beat the Undertaker's streak on 3 occasions & fail? #RAW

Triple H tells Batista that he’s not sure if he’s aware of this, but Daniel Bryan is injured and can’t compete tonight. Triple H mentions that even if he did, Batista would probably choke and lose anyway.

Mommy & Daddy are fighting and Orton sitting there like… #RAW pic.twitter.com/0klI0xvHhS

Triple H apologizes and says things are a little tense tonight. Triple H asks Batista if being unable to beat The Shield is how he wants to go down. Triple H says he has never backed away from a fight and that this ends when The Shield is no more. Triple H tells Batista that when they beat The Shield, he will get everything that he wants and desires, but until then, no one is getting anything.

Batista, You can't Quit! You didn't slap Triple H in the face! That the new way to Quit in the WWE!

this batista guy is just a brie bella knock off

Orton should quit too.

Batista walks off as Triple H screams at Batista. Triple H mocks Batista’s Hollywood Movie Career then tells him not to come back when his movie craps out.

Triple H: "Yeah Batista go back to your Hollywood, Your Box office Hits, and your playboy lifestyle! and your…God you have it made." #raw

I think Guardians of the Galaxy will be successful, Trips. #Raw

Backstage: Batista says ever since he came back, he’s been promised everything, but got nothing but crap. Batista says he’s done, then walks away.

Without Batista's ridiculous taste in clothing & wrestling attire who will we mock for looking like a fool every week? #RAW

Look on the bright side … at least Batista won't be WWE Heavyweight Champion. #Raw

HHH gonna be outside Batista's house with a radio over his head by the weekend.

Actually no, no I don't… Don't let the door hit you in the ass on the way out. #RAW

I love Cesaro's Umpire walk so much. #wwe #raw

Cesaro and Barrett should be called The Boom Tube. It's the Sound the European Uppercut and Bullhammer make when they knock you out!

Shhhh… Paul Heyman is on commentary.

>Cesaro complains about losing so Sheamus comes back with prejudiced remark. #Raw pic.twitter.com/qWdZeNSUKf

#ScumbagSheamus goes for the Brogue Kick, but Paul Heyman pulls Cesaro out of the ring.

Where did Paul Heyman get the strength to pull Cesaro out of the ring? He must be a God. #wwe #Raw

What a SMART move by Paul Heyman! No one should be kicked in the face by #ScumbagSheamus

Cesaro and Paul Heyman walk out of the match, leaving Bad News Barrett all by himself.

Paul Heyman: My Client, Cesaro, Has Some Bad News for Wade Barrett!

Thats what you get for going for that terrible Wasteland more, BNB 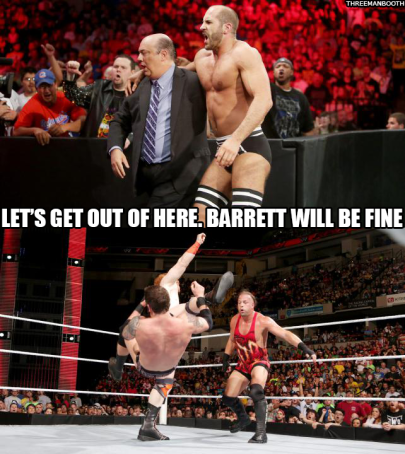 What a Jerk! #ScumbagSheamus just Kicked a Defenseless Wade Barrett!

If we get Cesaro vs BNB from this then I'm totally cool with that. #RAW

Damien Sandow comes out as Lane Stephenson, a member of the Indiana Pacers.

Damien Sandow should've come out to the NBA on NBC Theme.

Damien Sandow says he would love to be preparing for a game right now, we all know the Pacers Season has come to an end. Sandow says with all of his free time, he’s out here for a few reasons.

I Can't Wait to Read Damien Sandow's Dissertation on… whatever this is. #RAW

Sandow says reason one, he would like to say Lebron James is the greatest player in NBA History. Two, The Indiana Pacers are a losing team from a losing city. Damien Sandow gets a loud “You Suck.”

I'm from Indiana and you could've convinced me that Damien Sandow really does play for the Pacers. #RAW

Damien Sandow says, as an act of charity for supporting the Indiana Pacers, he will showcase some of his skills. Damien Sandow starts showing off his basketball skills.

I think that is traveling, Damien lol

Who woulda thought that Sandow's dignity would also be lost in that Money In The Bank briefcase. #RAW

*Sigh* Things were going SO WELL without you, Big Show. #BigShowRuinsThings

I forgot Big Show was even a thing.

Damien Sandow calls Big Show out for trying to ruin his showcase of “mad skills.” Big Show asks Big Show if he’s got game, then tells him to prove it. Sandow passes Big Show the rock, then starts to do awkward defense.

Alright, Damien Sandow you are fantastic.

After blowing in Big Show’s ear, Big Show tosses the basketball in Damien Sandow’s stomach, then knocks him out.

aaand #PoorSandow. Dude has fallen off a cliff. #RAW

That dunk was not impressive show, you were bigger than the goal

A basketball is in the ring a few segments after Batista quits. Coincidence? #BasketballsDontHoldGrudges #Raw

What are you smiling about, Kofi? You LOST!

You're Back Again, Kofi Kingston? What, last night, you were Barry Allen; tonight, you're Wally West?

Kofi has "mad skillz", thats is gimmick infringement on Damien!

You can't do two basketball spots in a row! #RAW

Bo Dallas does a headlock, then runs outside.

Kofi Kingston looks like he has a bunch of Kindergarten Stickers on his tights.

A “BO-Ring” chant breaks out.

How many times a day does Bo Dallas listen to that Journey song?

Bo, time to rock and roll. Bo, this time I'm in control. #RAW

BO! It's Time to Rock N' Roll! Bo Dallas wins with the Dallas-faction!

Well, Kofi. You looked good in defeat. So there's that.

Bo Dallas does his victory lap.

Bo Dallas will have a better winning streak than The Undertaker. #Raw

Bo Dallas goes for a handshake, but Kofi Kingston blows him off.

Well that was kind of a Dick move by Kofi.

Renee's hair is fabulous, I want to brush it. #RAW