I Have ‘Til Five: The Astonishing Attire of Leva Bates

In I Have ’til 5, 3MB will Pick a Topic and Discuss the 5 Finer Points of it

It’s no secret that Wrestlers are fans of comics. Take Cody Rhodes: he also gave a thought out answer when asked, “Who is the greatest super villain?” on WWE Inbox. His answer – Mr. Sinister – was the inspiration for his hooded cape ring attire, according to his an interview with Marvel. So it’s no surprise that Cody tweeted out his opinion on X-Men: Days of Future Past, the highest grossing film this Memorial Day weekend. But Cody’s not the only fan. There’s independent wrestler Leva Bates who is also a big fan of the franchise. She couldn’t see it on Friday; she was too busy competing in SHINE 19’s awesome 10 Women elimination match. But leading up to the  U.S. release of the film, she posted to her Instagram her favorite X-Men inspired outfits. In no particular order, her are 5 of them. But first…

Cyclops leads the X-Men from time to time. That’s a good trait for Leva to want to emulate. As one half of the Lucha Sisters, Leva holds the SHINE tag team championship with Mia Yim. I don’t if Leva is the leader in blue but regardless of who’s in charge, they’re the team to beat. Plus, did I mention she looks good in blue?

Leva’s opponents should always treat her like Rogue. Don’t let her touch you; you’ll regret it. She’s an accomplish wrestler and can adopt any style you put in front of her. Plus, did I mention she looks good in green?

Leva Bates for X-23! No, seriously. Leva Bates should be X-23 in future X-Men movies. See how good she looks in adamantium?

I was lucky to see Leva dressed at Gambit in New Orleans during Wrestlemania weekend. She dressed like the Cajun but she wrestled like a Superstar. Also, it allowed us to sing the X-Men theme during her match against Veda Scott. She is my favorite Gambit (sorry, Channing Tatum and Taylor Kitsch). 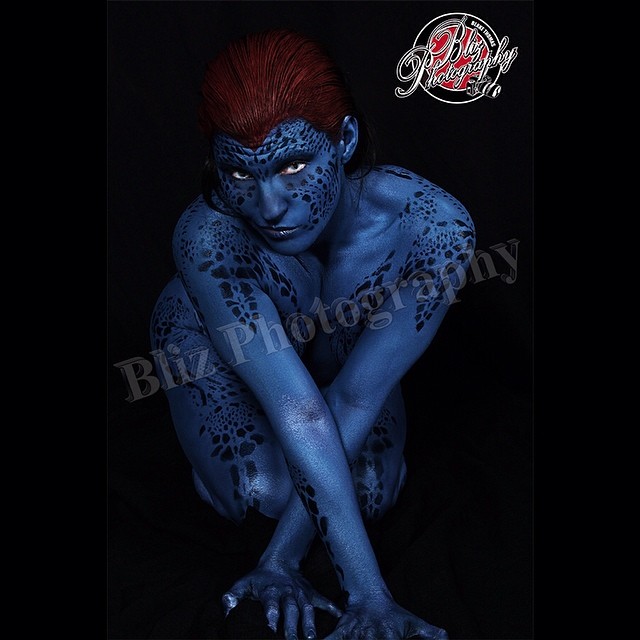 On X-Men: First Class, it took 8 hours to turn Jennifer Lawrence into Mystique. For Days of Future Past, it took 3 hours. I don’t how long it took Leva Bates but the effort paid off. This is clearly not a wrestling costume (and, for the record, neither is the Wolverine costume: claws are illegal foreign objects). Still, you can’t help but appreciate the look and dedication to the fandom. Show Leva your appreciation on her Twitter and Instagram accounts. Also, be sure to see her next match, either as part of SHINE, SHIMMER or Graymalkin.

This entry was posted in I Have Til 5 and tagged Bluepants, Cody Rhodes, Comics, Leva Bates, Marvel, Ol' Bluepants, SHIMMER, SHINE, WWE, WWE NXT, X-Men, X-Men: Days Of Future Past. Bookmark the permalink.