3MB wants to Highlight The IWC; No Not that IWC. The Illustrated Wrestling Community

Every once in a while a wrestler reaches the top of the wrestling world. When that happens, they’re capable of controlling thousands of wrestling fans with the flick of a wrist. Coco Canseco, friend of the booth, depicted some of the WWE Superstars that were able to reach this status and hold the WWE Universe in the palm of their hand.

In the 80’s, the WWF’s Rock n’ Wrestling Era had a face with a blonde handlebar mustache. Hulk Hogan was known for a lot of things: his 24 inch pythons, his theme music, Real American, his post match flexing, his ready to rip apparel, the list goes on. But Hulk Hogan had all his Hulkamaniacs in the palm of his hand whenever he out said hand and cupped it against his ear. 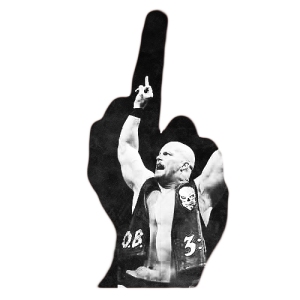 In the Attitude Era, Stone Cold Steve Austin did not need a whole hand to tell you how he felt. He only needed one finger. Austin made sure that his in-ring opponents and he especially made sure that his boss, Vince McMahon, know that they were number 1 in his book. He just used a different finger. The WWF audiences supported Austin in his freedom of expression, usually responding by brandishing the same expression.

So much of John Cena‘s career has been synonymous with his hands. He popularized “You Can’t See Me,” waving your hand in front of your face. It has been adopted by his fans, mocked by opponents and mimicked by athletes and celebrities. Since making The Marine, Cena has also incorporated “The salute” in his pre-match ritual. Coco chose to focus on another of his signature signs. We think the 3 fingers stand for “Hustle, Loyalty and Respect.” The closed circle means … Cena? or is a symbol of the bond between Cena and his fans? Sure, let’s go with that.

Daniel Bryan doesn’t need 5 fingers like Hogan. Or 3 fingers like Cena. He needs only 1 finger but, unlike Stone Cold, it’s not the naughty finger. Daniel Bryan started an entire movement by extending his index finger into the air. The WWE Universe responded in kind, shouting “YES!” at the top of its lungs. Welcome to the YES! Era; our WWE World Heavyweight Champion is leading the charge.

GIF Courtesy of Wrestling With Text

Send Coco Canseco a congratulatory YES! via  Twitter or Tumblr.  No Austin salutes, please, unless you’re saying she’s number one!