Jimmy is bold. He trying to screw on the job. #TotalDivas

Eva Marie and Summer Rae are driving to the next town. Eva Marie is happy to be off the bus and vents to Summer Rae about why she was so upset about the pictures leaking. Summer Rae takes her side, saying the other Divas know nothing about her or her life. Eva Marie thinks that since Summer Rae is associated with her now, the Divas will try and throw her under the bus as well.

Oh, Right. Summer Rae and Eva Marie eliminated themselves from the #TotalDivas bus.

Eva Marie tells Summer Rae that Nikki Bella was cool about the photos and tried to help her out, unlike Natalya. Eva Marie and Summer Rae start talking about Natalya, who they claim talk behind everyone’s back despite being a WWE Veteran. Sumner Rae thinks Natalya is just jealous that she didn’t maximize her time in the WWE in the 6 years of her being there and that in 6 years, Summer Rae vows to do more than Natalya. Eva Marie and Summer Rae think the Total Divas are bored.

Summer with the BURN! on Nattie. "Guess where I'm going to be in 6 years? Now winning the Divas Title ONCE!" #TotalDivas

Daniel Bryan and The Bella Twins walk to the arena. Brie Bella vents to Nikki Bella her frustrations about the bus. Brie feels bad because she convinced Bryan to get the bus, but thinks he’s regretting it due to all the noise the Total Divas have been making. Brie brings up the unnecessary drama the Divas have on the bus, while Nikki is just glad she’s not on the bus anymore.

Before RAW, Brie Bella greets The Usos then asks Jimmy Uso if he’s ready for the bus tonight. Jimmy Uso says another night with no cookie, but Brie tells him he can get cookies for a lifetime. Jey Uso chimes in saying that he put a ring on it so he can get cookies when he wants. Brie reminds Jimmy Uso that there’s no boning on the bus.

Brie Bella: Ready for another night on the bus? Jey Uso: I'm NOT. You now…cause I wasn't invited. Jimmy Uso: Be cool, bro. #TotalDivas

Lol jimmy is wanting to get frisky damnnn jimmy #TotalDivas

The word of this episode is going to be "cookie", isn't it? #TotalDivas

Brie Bella tells Jimmy Uso that she had to try really hard to get this bus for Daniel Bryan. Natalya chimes in saying that Bryan is crank on the bus. Jimmy Uso thinks it’s because no one’s getting any cookie. Natalya says the bus ride is only four day then questions Jimmy Uso’s intestinal fortitude.

Natalya tells Jimmy Uso to keep the mouse in the house, but Jimmy responds that the mouse comes out after cheese in the dark. Natalya says when the cat’s away, the mice comes out to play, then tries to imitate Cam’ron’s “Girl Bye.” It doesn’t go over well.

Oh, Nattie, you're so … let's just call it Canadian. #TotalDivas

Natalya is about as cool as your 3rd Grade Teacher. #TotalDivas

Eva Marie talks about how excited she is to be on RAW tonight, since she doesn’t get the chance to wrestle on RAW often.

Eva Marie: "I haven't wrestled much on RAW…" Me: "There's a reason behind that." #TotalDivas

Anytime Eva talks about her wrestling, I seriously want to throw sharp objects at my TV. #TotalDivas

After a 12 Diva Tag, the Total Divas get back on the bus with Daniel Bryan, Jimmy Uso and Tyson Kidd.

Cam’ron wants the bus to get livelier and be a party. Daniel Bryan suggests they talk global contemporary world issues.

Natalya starts talking about Cam’ron’s debut single, “Girl Bye.” After Jimmy Uso sings some of the lyrics, Daniel Bryan asks Cam’ron if being all about the “Chingle Chingle” is the message she wants to send to little girls all over the world and her future daughter.

Note: We don’t normally post clips in the recap, but this one is worth it.

"It's all about that jingle jingle"- @WWEDanielBryan I can't breathe. #TotalDivas

Daniel Bryan interpreting hip-hop needs to be a weekly and recurring thing! #TotalDivas

I would buy Cameron's "Girl Bye" single if it includes a cover of the song by Daniel Bryan. #TotalDivas

Why is it that all the embarrassing things seem to always happen to @NatbyNature? #TotalDivas

Natalya explains that she had Icy Hot still on her hands, and when she grabbed toilet paper, she must’ve accidentally spread it around. Detective Daniel Bryan realizes Natalya pooped on the bus! Natalya tries to say she rubbed it on her inner thigh, but Detective Daniel Bryan makes fun of her for changing where she placed the Icy Hot in her story.

Shit, Natalya. Get it together. #TotalDivas

There is far too much pee and poop talk from Nattie. This is not how the Queen of the Harts is supposed to act. #TotalDivas 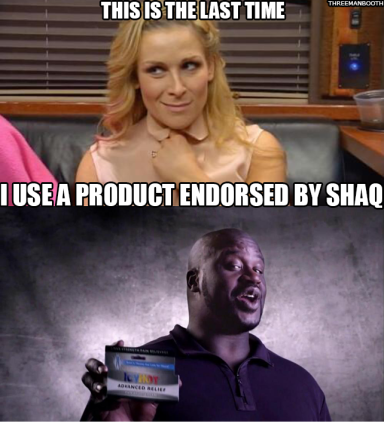 John Cena walks into the arena with Nikki Bella. Nikki is concerned about the cracks in the floor.

Who walks to the studio in stilettos? WHO?!? #TotalDivas

Welp. Natalya got it together! In record time too. #TotalDivas

Butt hurt or not, Nattie granting her first Make-a-Wish is a truly wonderful moment. #TotalDivas

@NatbyNature is a true queen outside the ring as she is inside the ring. #Fact #TotalDivas #QueenOfHarts

That was really nice of @NatbyNature to give her ring jacket to that make a wish kid. That's why she's my favorite Diva. #TotalDivas

Summer Rae talks with Ms. Sandra about her outfits being too revealing when she is out there with Fandango, but then shows Sandra a dress that is too covered up. Summer Rae needs help making the outfit more revealing.

Summer Rae, You are new. You DO NOT come to Miss Sandra and ask to skank up your ring gear! #TotalDivas

Summer Rae thinks the dress makes her covered up like a Grandma. Sandra disagrees, but Summer tells Sandra her Grandma would wear a dress like that.

Not sure what spin-off I want more, a 24/7 look at the Braniel bus or a reality show based on @RealSummerWWE's Grandma. #TotalDivas 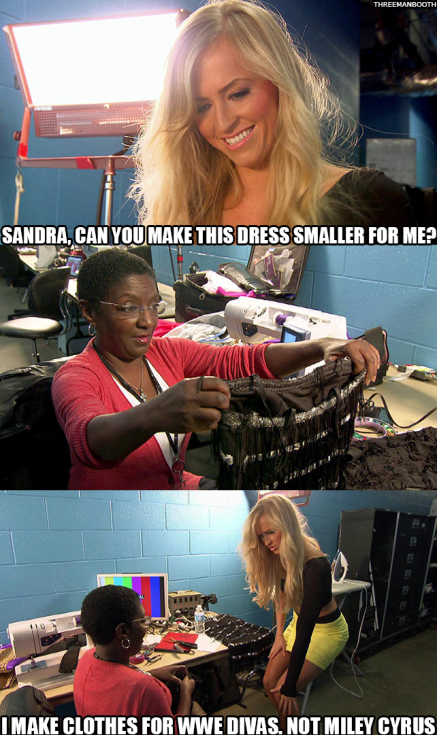 Sandra agrees to alter the dress for Summer Rae.

Brie Bella catches Jimmy Uso and Naomi having sex (or getting close to having sex) on the bus!

Naomi getting busy on the bus! #TotalDivas

When I Say Uce, You Say, Uh-oh… Jimmy got caught trying to get it in. #TotalDivas

Naomi thinks was a horrible idea then scolds Jimmy Uso about locking the door. Jimmy Uso says he locked the door, but Naomi throws her clothes at him. Jimmy Uso breaks the 4th Wall and shakes his head.

Brie Bella, Don't You Knock?!? Funk was on a Roll! #TotalDivas

Jimmy Uso has the "I Ain't Even Mad" face. #TotalDivas

Brie Bella tells Daniel Bryan about Naomi and Jimmy Uso having sex on the bus. Daniel Bryan asks where and Brie reveals it was where everyone sits. Bryan talks to Brie about his rules being broken, then asks how they’re supposed to sleep on the bus tonight. Brie suggests spraying Lysol.

"How are we supposed to sit there tonight?" "Lysol?"

Brie is a snitch! #TotalDivas

I would say "Why you snitchin, Brie?" but Bryan would be the type of person to just smell it when he gets on.

After a successful match for The Bella Twins on Main Event, everyone gets on the Daniel Bryan Bus One Last Time.

Daniel Bryan says the bus was fun, but every rule was broken, so there will never probably be a bus again. Tyson Kidd chimes in saying he didn’t break any rules. Jimmy Uso adds on that technically they didn’t break any rules because there was no erection on the bus. Naomi is in disbelief.

At catering, Daniel Bryan and Brie Bella discuss John Cena and Nikki Bella’s dieting, and their wedding plans. Some of the plans include $1,200 wooden invitations made of real wood.

I love how cost conscious and environmentally minded and aware of #ContemporaryGlobalIssues @WWEDanielBryan is!! #TotalDivas

Nikki Bella walks up and talks with Daniel Bryan and Brie Bella about the tour bus. Brie Bella says that it smells like fish, which Nikki Bella agrees with. Bryan says that the fish smell started when Nikki Bella came up. Nikki jokes about throwing a pineapple at Bryan’s head.

"It didn't smell like fish until you showed up so…" :]

After The Bella Twins bring up a future photoshoot with Summer Rae, Daniel Bryan mentions that Summer Rae came up to him to talk about the rumors. Bryan says Summer told him that she really cares about what Bryan thinks about these rumors. Daniel Bryan reveals that she tried to hug him as well.

Nikki Bella brings up that Summer Rae tried to do the same thing with John Cena, but she nipped it in the bud right away. Brie Bella gets pissed off about Summer Rae’s antics and goes to confront her.