RAW kicks off with the host of Wrestlemania 30, Hulk Hogan!

The WWE Should Invest in a Hulk Hogan Hologram.

After a loud response for Hulk Hogan, Hogan tells the WWE Universe that for the past 2 weeks, fans have been welcoming him back to the WWE Universe. Hulk Hogan talks about watching the WWE Network on his timeoff and reliving his greatest matches against The Ultimate Warrior, Macho Man Randy Savage, and his match against Andre The Giant. Hogan describes how amped up he feels when he watches his match with Andre The Giant and reminds us about the time he bodyslammed Andre.

"Real American" Should Always Be On Deck to Fire Up a Crowd!

I think Hulk Hogan means 30 superstars in the battle royal. Not 3.

I LOVE TROPHIES IN WRESTLING. #RAW

Just keep Bret Hart away from all trophies at Wrestlemania.

I've got one question for you, is it made of chocolate? # RAW

Hulk Hogan asks the WWE Universe, “Whatcha Gonna Do At Wrestlemania when Hulk Hogan and the memory of Andre The Giant runs wild on you?” Hulk Hogan is interrupted by John Cena’s music as Cena comes out clapping. John Cena and Hulk Hogan salute each other.

You'd think Andre's son, The Big Show, would be out there to help commemorate this occasion. #WWE #Raw

How long till John Cena wins the Andre The Giant Trophy?

John Cena imitates Hulk Hogan, then makes himself the first entrant in the Andre The Giant battle royal.

Yayyyyy! This means The Wyatts can fight The Shield!

No you're not, JAWN.

Jesus, does Cena have to have EVERY trophy up for grabs in WWE? #raw

Rumor Has It That Andre The Giant Used to Have to Pay Double or Triple to Enter Battle Royales. John Cena Should Do the Same. #Tribute

Can the Trophy be like another Hardcore Title with 24/7 rules?

"Memphis, We're Here." That's the Opposite of a Cheap Pop, I guess…

Bray Wyatt tells John Cena and Hulk Hogan that he has always been fascinated with pride, because it is his favorite sin. Wyatt says pride has the ability to blind even the strongest men, even those who claim to be immortal.

Bray Wyatt mocks Hulk Hogan’s “Say Your Prayers” catchphrase, then John Cena’s “Hustle, Loyalty, Respect” catchphrase and says neither catchphrase does them any good. Wyatt calls John Cena and Hulk Hogan liars and says their foolish pride allows them to prey upon the weak and fill them up with hope, but hope is dead.

Take ya vitamins and say yo' prayuhs! #WWE #Raw

Bray Wyatt's a fatty so it's obvious he didn't train, say his prayers or eat his vitamins. #RAW

John Cena makes fun of what Bray Wyatt said, saying that he doesn’t see a God when looks at Bray Wyatt, he sees a homeless guy who is wasted in Margaritaville (Yes, he sings the song.) Cena says that Bray Wyatt didn’t find any salt, he found two goons, a tiki torch and rocking chair he found at Cracker Barrel.

Not that song! D:

Popped for Cracker Barrel no matter how hard I tried not to after the rest of the statement.

John Cena asks Bray Wyatt that if he thinks he can walk out here in a Hawaiian Shirt, a Fedora and wants to be somebody, then he needs to prove it. Cena apologies to Hulk Hogan, saying he might not be able to make the battle royal, because he is issuing an open challenge to Bray Wyatt at Wrestlemania 30. Cena hopes Wyatt accepts, because if he does, he is going to get the ass whooping on a lifetime.

Cena, sweetie, find a plan and stick with it. You're an adult, despite what your dress sense says. #raw

You Would Wear Hawaiian Shirts and a Fedora Too If Your Dad Wore Suspenders AND a Belt.

Hogan, Cena and the Ghost of Andre the Giant to Face Off Against the Wyatt Family! #RAW

Is The Ultimate Warrior gonna come out and save Hogan again Ala Wrestlemania 8?

John Cena uses a roll up on Erick Rowan

Look, Erick Rowan, Daniel Bryan can beat you with a roll-up. John Cena though… I don't know, brother. 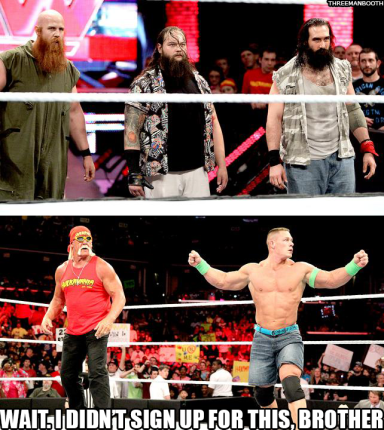 The Wyatts can take their time because really, how long can Hogan stand up straight for? #WWE #Raw

After The Wyatt Family leave, Hulk Hogan does his classic poses.

And as Hogan & Cena did the Hogan taunts together, the heavens opened up, locusts fell, & boiled rivers ran red. Sleep well children. #RAW

I AM A REAL AMERICAN

Cena, if you AA Hogan right now, I'll never say another bad thing about you

Stephanie's Always Glowing When She Comes Out to #RAW. She Probably Just Fired Someone.

Stephanie McMahon reminds the WWE Universe of Daniel Bryan attacking Triple H last week, but suffering the consequences when Triple H laid Bryan out with a Pedigree. Stephanie thinks Bryan’s actions are ground for immediate termination, but says she and her husband want to lead by example. Stephanie says on behalf of The Authority, she offers a very sincere apology to Daniel Bryan, because it’s Best For Business.

It's a shame. I wanted to see if Stephanie fires like her dad. #RAW

Stephanie could tell you to "Go To Hell" and you enjoy the trip. #RAW

Stephanie McMahon believes there is value in a Daniel Bryan Brand, but not as much value as A+ Brands as Batista, Randy Orton or Triple H. Stephanie claims Bryan has a niche following, so The Authority won’t fire Daniel Bryan tonight as long as Bryan can return the favor and apologize to them.

Ok, this "I only wrestle A+ players" thing needs to end. You wrestled Curtis Axle last year Hunter….and lost

Stephanie McMahon says it’s time Daniel Bryan admit that he is wrong, and that Bryan admits to himself to be in the ring with Triple H now, or at Wrestlemania 30. Stephanie claims Triple H is above Daniel Bryan professionally, figuratively, and literally.

Stephanie McMahon says as long as Daniel Bryan can apologize, they can move forward. If Bryan refuses to apologize, there will be severe consequences.

I wonder if HHH will cover himself in water and walk through dry ice again this year. Science, guy.

I'd Rather Get A Hard Earned B+ on my Report Card than a Sycophantic A.

The New Age Outlaws come out for commentary.

That's the most annoyed "Oh you didn't know?" I've ever heard

Road Dogg sounds so angry in the new "Oh, You Didn't Know?!" intro.

Man, look at all that nepotism. #RAW

Match 02: The Usos vs. Rybaxel (With The New Age Outlaws on Commentary)

Ryback announces that he is in the Andre The Giant Memorial Battle Royal:

Ryback's in the Wrestlemania Battle Royal. Good for him. #RAW

The Usos make their entrance, but the commentators talk about Jerry Lawler’s shirt

Talking ALL OVER the Siva Tau. How Disrespectful. Superkicks for Everyone!

Jerry Lawler looks like he is ready to attend King Arthur's Round Table.

What Jerry Lawler is wearing may be the only thing scarier than The #Undertaker. #WWE #Raw

The Usos do their dive tag.

The Usos do the Uso Splash.

I like how the Usos can win a match without using Twin Magic. #Shade?

Backstage: Kane tells The Shield that their losses to The Wyatt Family and The Shield Summit was embarrassing to The Authority. Ambrose asks if there’s a point to all of this. Kane responds by telling Ambrose that he is going to light a fire under The Shield, since they have been a valuable asset in the past and he wants to see if they will remain a valuable asset.

Look at the This Snarky Shield trio! #SamePage

Kane tells The Shield that he’s giving them the opportunity to step up tonight. Ambrose says The Shield will exorcise their demons tonight. Roman Reigns gets in Kane’s face, and tells him that they will exorcise any demon that gets in their way. Reigns tells Kane to Believe In The Shield.

So, what about Dean Ambrose? Doesn't he have to prove himself? Maybe defend that title?

How long till the E drops Jack Swagger's name to just Swagger?

Big E. Announces his entry into the Andre The Giant Memorial Battle Royal:

Or Big E., you can channel the memory of Macho Man Randy Savage and DEFEND YOUR INTERCONTINENTAL TITLE at Wrestlemania.

Does this mean the IC championship won't be defended at Mania? Because that would blow tbh.

If Big E wins the Andre The Giant Memorial Battle Royal, he might be the Recipient of Bad News Brown Memorial Trophy Smash to the Back

Cesaro mocks Jack Swagger on the outside. 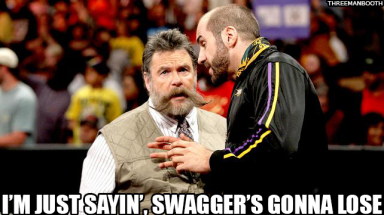 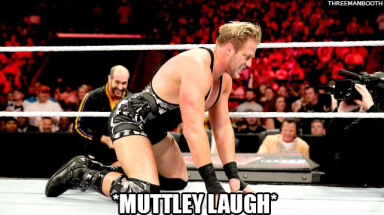 The Real Americans try and blame each other, but Zeb Colter snaps and says it’s both of their faults. Colter says he’s sick and tiredo f this, then starts to take off his vest.

Zeb is getting nude. I don't want this. #RAW

Zeb Colter orders Cesaro and Jack Swagger to shake hands. Swagger refuses to shake Cesaro’s hand, but eventually shakes his hand. Cesaro shows how strong he is, by giving Jack Swagger a much stronger handshake.

Zeb is the new Dr.Shelby.

Zeb, I deal with bickering kids on a daily basis, I feel you, dude. #raw