Posted on September 5, 2013 by 3mbooth
In Highlight Reel, 3MB will look at funny and interesting wrestling videos

Fall is drawing near as all the telltale signs are coming into place. School is starting back, leaves are beginning to turn colors and NFL Football is back to causally airing opposite iMPACT on Thursdays, dominating our Sundays and going head to head with RAW on Mondays. We’ll continue to foolishly cheer on the Cincinnati Bengals; that team will surprise you just like former teammate Brian “Loose Cannon” Pillman surprised the wrestling world. But every season brings about football players incorporating wrestling gestures into their celebrations, like channeling Razor Ramon after a Touchdown or  Rob Van Dam’s “R-V-D” thumb point. Standard wrestling gesture, “I want the belt” (hands across the waist),  became pop-culturally the Discount Double Check.

But football players aren’t the only ones looking to publicly pay homage to pro wrestling. Announcers and Commentators are showing respect too. Adam Lefkoe of WHAS11 in Louisville, Kentucky transformed his Sportscast into Wrestlecast! Wrestlecast was supposed to be a recap of high school football highlights. And, in a way, it is. But in a better way, it’s about how many pro wrestling names and references Adam can fit into one segment… while talking about football.

How many references did you catch? The official total is 31 out of a Twitter crowd-sourced 50 names (Just like the WWE, Lefkoe is social media savvy: he explains the reasons behind Wrestlecast on his Tumblr page). All Adam was missing during his ‘promo’ was a Discount Double Check reference! Actually Scratch that, Adam does one better: he proudly displays a Vintage WCW Championship Belt (replica) complete with ‘nWo’ spraypainted on it! The Gauntlet has been thrown down: Adam Lefkoe just put every wrestling fan – be they football player, football commentator or sportscaster on notice! 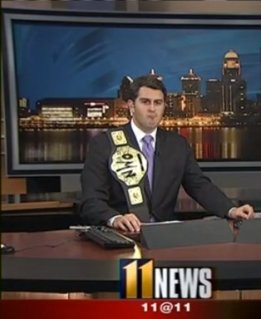 Who deserves the belt?