John Cena mentions the rowdy crowd tonight in Anaheim, and says he agrees with them because he’s also not happy about what happened last night at Summerslam. Cena is cut off by a loud “Cena Sucks” chant.

“It’s Early But You Are Rowdy Tonight!” Oh, Is John Cena The Host of RAW? Does That Mean He’s Not Going to Do Anything?
— ThreeManBooth (@3ManBooth) August 20, 2013

John Cena thanks the crowd for a “warm Anaheim welcome” then reminds us that he said the next person to hold the WWE Championship would earn it, and last night at Summerslam, Daniel Bryan earned it. After a loud “YES!” chant, Cena publicly thanks Daniel Bryan for bringing out the best of him and that a WWE Superstar should be judged by a commitment to excellence in this very ring.

Good guy Cena thanks Daniel Bryan for teaching him how to stay down for a 3 count. #RAW
— Stacey (@LittleSherbie) August 20, 2013

John Cena says he and Daniel Bryan have the same dedication to compete in this ring and that is the reason he chose Bryan as his opponent for Summerslam, despite being told not to. Cena tells us that he has a torn triceps. 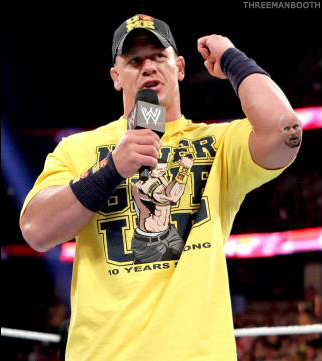 John Cena tells us that the doctors wanted him to go home, but he refused and that he’s not using this injury as an excuse. Cena says last night he was defeated by a better man in a clean fight, and that’s all he wanted: A clean fight.

John Cena tells us that he was disgusted, offended and disgraced when he found out about Triple H and Randy Orton’s plan to win the WWE Championship. Unfortunately for Cena, he can’t put off his surgery any longer and he has to leave the WWE. The crowd erupts and Cena says he loves them, but he’s going to be gone for the next 4-6 Months.

Goodbye Cena! Stay away for a while. Catch up on some TV. Breaking Bad, Walking Dead, My Little Pony: Friendship Is Magic. Choice is yours.
— Langdon Alger (@KeepItFiveStar) August 20, 2013

John Cena says before he goes, he wants to introduce the man who’s earned his respect and the right to be called “Champion.” John Cena introduces Daniel Bryan. Daniel Bryan comes out and shakes hands with John Cena. Cena leaves the ring and loud “YES!” and “Daniel Bryan” chants break out. Bryan gets ready to speak, but is cut off by Stephanie McMahon’s music.

#CoolMomSteph coming out in her #CoolMomSkirt that she got from Forever 21.
— Langdon Alger (@KeepItFiveStar) August 20, 2013

Do you think Stephanie made that leather skirt from Trips’ circa 2001 leather jacket? #RAW
— Stacey (@LittleSherbie) August 20, 2013

Uhhh….Bryan was about to speak Stephanie!
— Randy Wilder (@InstantRandy) August 20, 2013

Stephanie McMahon apologizes to Daniel Bryan and that he didn’t deserve to have the WWE Championship snatched away from him like that. Stephanie tells Bryan that she hopes he understands that her husband Triple H was only doing what’s best for business. A loud “NO!” chant breaks out.

Stephanie McMahon is Standing By Her Husband’s … “Indiscretion.” Just Like a Politician’s Wife. Shame. Bring Back the Lioness of the WWE!
— ThreeManBooth (@3ManBooth) August 20, 2013

Daniel Bryan mentions the “NO!” chants and says that the people disagree about what’s best for business. A “YES!” chant breaks out as Daniel Bryan says he expects these type of shenanigans from The McMahons but not Triple H. Bryan says that Triple H was a rebel and a renegade, but now he’s wearing a suit and has a corporate haircut. Bryan tells Stephanie that the old saying is true: When you lie down with trash, sooner or later, you start to stink.

The Entire Crowd is Chanting “Trash” At Stephanie! It’s Like an Attitude Era Flashback for Her.
— ThreeManBooth (@3ManBooth) August 20, 2013

Stephanie McMahon tells Daniel Bryan he’s upset so she’s gonna let it slide. Daniel Bryan responds with Homer Simpson like sarcasm, then asks if Stephanie is going to fire him. Bryan says if he gets fired, he will go back to wrestling in armories and selling t-shirts out of his car, and that he is not afraid of being fired. Bryan says before he leaves, he’s going to get his money’s worth and he doesn’t care if it’s Triple H or Randy Orton, but he will really give the WWE a reason to fire him.

I Feel Like Stephanie McMahon Gave Zack Ryder the Same Speech. Except He Was a “Solid” C-
— ThreeManBooth (@3ManBooth) August 20, 2013

I don’t blame Daniel Bryan for being upset. #CoolMomSteph just graded him like he was a restaurant in NYC.
— Langdon Alger (@KeepItFiveStar) August 20, 2013

Is Stephanie using the phrases she uses on her kids right now? Is she going to send D Bry to the naughty step? #raw
— Kara (@karaadora) August 20, 2013

#CoolMomSteph is putting Daniel Bryan in time out?! This is ridiculous.
— Langdon Alger (@KeepItFiveStar) August 20, 2013

“Uncouth? You Remind Me of Another C-Word!” Daniel Bryan, REALLY being Uncouth.
— ThreeManBooth (@3ManBooth) August 20, 2013

When has security ever stopped anyone in the WWE? #wwe #raw
— Ryan Shell (@DAsharpshooters) August 20, 2013 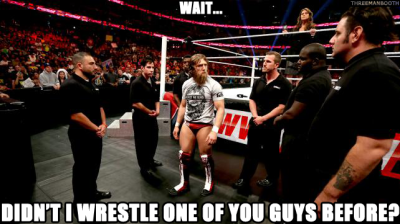 Daniel Bryan is escorted out by security while screaming “NO!”

If this leads to Daniel Bryan breaking and putting the Yes/No Lock on everything in sight ’til Mania, I am for it. #WWE #Raw
— DonnyBrook Boys (@donnybrookboys) August 20, 2013