Posted on August 15, 2013 by 3mbooth
In Snapshots, Three Man Booth searches for images to share.

In case you haven’t heard, Darren Young revealed that he….

is NOT on the cover of Cocoa Pebbles Cereal. Unfortunately for Mr. No Days Off, he has once again been confused with WWE Champion, John Cena. A cartoon version of John Cena, but John Cena nonetheless. 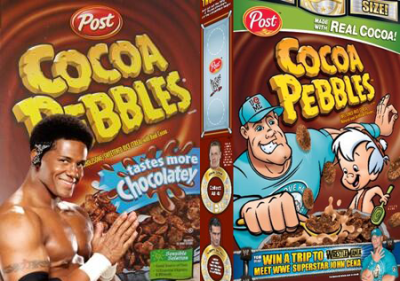 Although Darren Young is not actually on the cover of Cocoa Pebbles, he has expressed interest in being the spokesperson for the cereal.

But in all seriousness, we at Three Man Booth congratulate Darren Young for taking that first step and openly revealing his choice of cereal. We hope that some day, Superstars will be able to reveal their choice of cereal, without fear or fanfare.