Posted on January 17, 2013 by 3mbooth
In Snapshots, Three Man Booth searches for images to share

I’m a sucker for weddings. It is a time honored tradition in professional wrestling but it’s also an excuse for wrestlers to wear more than just one article of clothing at a time. Plus, it’s a rare time for wrestlers to wear suits and dresses without having to worry about having their clothes ripped off per match stipulations. Receiving TNA’s invitation to the wedding of Brooke Hogan and Bubba Dudley Bully Ray “Mark” peaked my interest.

Here’s the thing though. An email wedding invitation? I mean I get it: it’s the 21st century. The only casualty: the art of calligraphy. The evitation is less upsetting than the grammar: 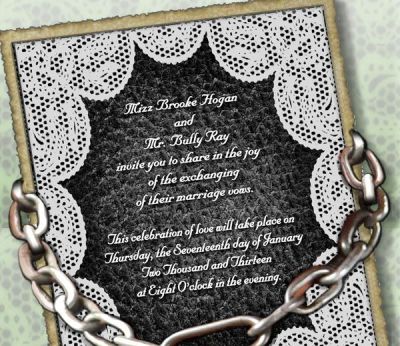 Brooke Hogan, this is – hopefully – your one and only wedding and you want to be known as “Mizz Brooke Hogan?” This isn’t a Taz / Tazz issue. “Miss” is a proper title, free for everyone. Vince doesn’t own it. If you can’t proofread, then you can’t marry. Always Spellcheck. These are the rules. Or, at least be consistent. “Vows” should be “Vowz” to match. Certainly, this is something that one half of the Dudleyz / Dudleys should be able to keep straight.

I received the invitation but not the gift registry. Getting Bully Ray a toaster from Williams Sonoma or Crate and Barrell will only result in someone getting hit in the head with an expensive toaster. Instead, I will impart the gift of knowledge (also, because I’m cheap):

“Good Grammar Costs Nothing.” If I were in the wedding party, I would have presented Bully and Brooke with matching his and her t-shirts. Possibly hoodies, depending on the bridesmaids. But, regardless, here’s to the happy couple. Let’s hope that their union lasts longer than your average Divas match.