While web-surfing, we – as we imagine everyone does – made a pit stop at the reputable DatesinHistory.com. After browsing birthdays, dog birthdays and parrot birthdays, we decided to look up the records for January 11, 1993. Here is what we found:

Something seems missing, doesn’t it? Something Uncut, Uncensored and Uncooked? I’m sure the fine folks behind DatesinHistory would rectify their omission of January 11, 1993 entries to include the first Monday Night RAW, the show that has become the longest running weekly episodic show in television history. With the 20th Anniversary of Monday Night RAW coming up, we decided to look back at that first RAW and describe our favorite moments from it. 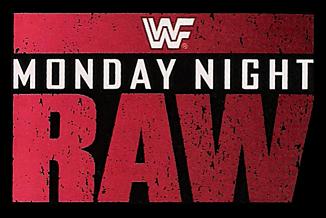 LeKeith: The thing I remember about the first Monday Night RAW was how excited we were to see it. My brother and I were headed home, in our parents’s car, and couldn’t stop talking about we needed to be home at 8:57 / 7:57 Central (they always said the Central Time) to see the first RAW. I remember sprinting from the car to the living room and turned on the TV just after 8:57. My first image of RAW is this: 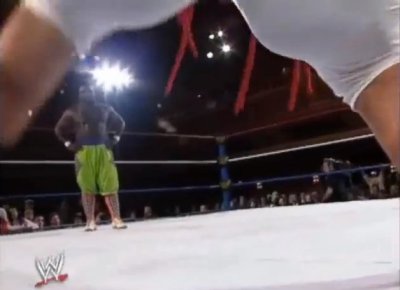 Yep, I remember RAW by thinking of that camera shot through Yokozuna’s legs, showing his opponent Koko B. Ware and A LOT of Yokozuna’s butt. That butt went on to hold multiple championships in the WWF / WWE and be inducted into the Hall of Fame. And, despite a vivid mental image of Yoko’s grundle, I haven’t stop watching Monday Night RAW, no matter the start time the duration, the network, or that time they moved RAW to Thursdays.

KeepItFiveStar: The first Monday Night RAW was definitely a historic event. Wrestling on a Monday? Unheard of! What about Saturday’s WWF Superstars? And Sunday’s Wrestling Challenge? Three Days of WWF programming would surely over-saturate the market, no? Regardless, one of my favorite memories is seeing the greatest wrestler of all time, and outer-space, Max Moon, take on some up-and-comer named “Shawn Michaels.”

One of the best things about this match was that it was the first Champion vs. Champion match on Monday Night RAW. Shawn Michaels was the Intercontinental Champion (Whatever), while Max Moon was the Intergalactic Planetary Champion, which meant he was Champion of all the Galaxies! Including, but not limited to, the Planet Omicron Persei 8. I don’t remember how that match ended, but 20 years later, people are still talking about Max Moon. As for Shawn Michaels, last I heard, he was filming some hunting reality show somewhere … Good for him.

3MB: I’ve considered myself an expert on all things wrestling from a young age. I used to read all the Wrestling magazines, memorize wrestlers’ birthdays and practice counter to Ric Flair’s moves for the inevitable day that we would face off. All of my wrestling knowledge was put to shame the moment Rob Bartlett appeared on the first Monday Night RAW.

He proved to me – nay, everyone – that you didn’t need years of being a wrestling fan or even having to have read a single wrestling magazine. All you needed was to wear sunglasses indoors, wear a plain black jacket and crack jokes. Lots and lots of jokes. Because when you’re standing next to the Macho Man Randy Savage and Vince McMahon, you somehow look like the normal one.