Posted on September 5, 2012 by 3mbooth
In Snapshots, Three Man Booth searches for images to share
.

Triple H knows how to get people talking. Last week, The Game may or may not have retired after delivering an emotional speech two weeks after his loss to Brock Lesnar at Summerslam. This was one of the last parting images we had of Triple H on RAW.

While many thought this would be the end of Triple H (for a while,) WWE.com and TMZ proved us wrong. The Game resurfaced one week later with a new attitude and a new look!

Wrestling fans all over the were surprised by the new look. And while Triple H is still the same guy he always was, we at 3MB think that a little warning would have been nice. Something like… 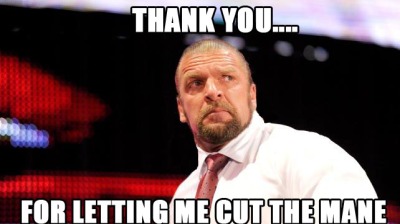 Ah, well.  We all gotta grow up sometime, right?