Posted on July 8, 2012 by 3mbooth
In Snapshots, Three Man Booth searches for images to share.

It’s always nice when non-wrestling websites acknowledge the ongoings of professional wrestling. Based on the events of this week’s Monday Night RAW, WWE Superstars showed up over the internet, more so than usual.

You know Three Man Booth considers AJ to be extraordinary every week but, this week, her adorableness was noted by two different places. TVLine.com complimented the AJ / CM Punk / Daniel Bryan love triangle on their “20ish Questions” article:

AJ was not the only wrestler acknowledged by the general media this week. On Twitter, Wrestlers’ names trend on Twitter’s constantly during Monday Night RAW. However, CNN.com seemed to take particular notice of one of the trending topics: Doink the Clown. Jarrett Bellini decided to make the Clown Prince of the WWE his focus in the “Apparently This Matters” article: 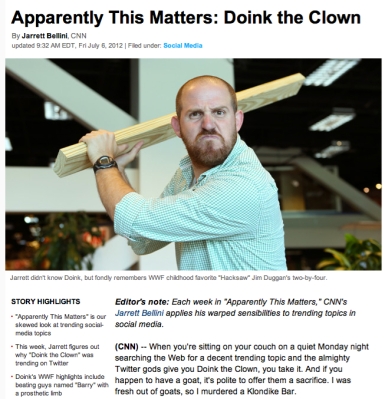 It’s good to see wrestling acknowledged for its fun, entertaining aspects by other outlets.

This entry was posted in Snapshots and tagged AJ, AJ Lee, Doink the Clown. Bookmark the permalink.