Nikki Bella walks up to John Cena, who gives her roses and asks how she’s been.

Watch him NOT propose #TotalDivas

Nikki, with everything regarding Cena, you need to keep expectations low.

Whether you like @JohnCena in the ring or not, he is such a good person. #TotalDivas

Nikki Bella tells John Cena that she still wants marriage and kids, but Cena says they’ll talk about that later.

#NeverSatisfiedNikki already asking about marriage and children when John Cena is already giving her part of what she wants. #TotalDivas

You put us through three episodes worth of cliffhangers and still don't propose? Come onnnn Cena. #TotalDivas 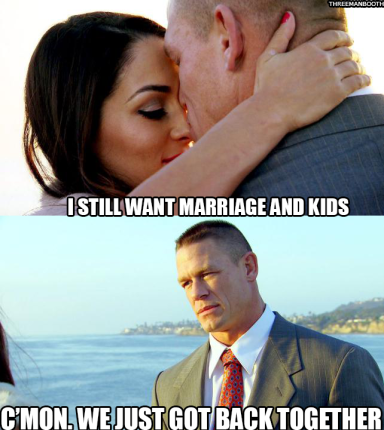 At RAW, Natalya and Summer Rae are having a match. Backstage, Eva Marie and Cam’ron are watching the match together.

Natalya Beat Summer Rae again in a match. Another week and her piss is still stronger. Test Her! #Wellness #TotalDivas

Eva Marie says Cam’ron is one of her good friends and they have a lot in common since they get a lot of heat for not being brought up through the independent scene.

Still havent figured out who i dislike more, Eva or Cameron

THIS IS CENA'S BUS?!

That bus is bigger than my apartment. #TotalDivas

Is that a bus John Cena has of a portable hotel suite? Because it looks more like the latter. #TotalDivas

Nikki Bella talks about how great John Cena’s bus is as Brie continues to be impressed. Nikki explains that Cena got the bus because it puts years on his caareer. Brie tells Nikki that since they have a 5-Day Tour coming up, she is going to suggest to Daniel Bryan that he try having a bus.

The tour bus tho. #totaldivas

There's a Wine Cellar on John Cena's Bus?!? How do you even DO that?!? #TotalDivas

Nikki Bella tells Brie Bella to look up at the ceiling. Brie notices a mirror on the ceiling and is even more impressed. Nikki takes it too far by telling Brie that she watches herself having sex on the tour bus.

Nicole always takes it one step too far. #TotalDivas

One Week Later, the Total Divas are greeting fans and doing their Total Diva Brunch. Nikki apologizes for having workout clothes on because she just came from the gym. The Total Divas talk about dieting and sleep.

Brie Bella brings up that she asked Daniel Bryan about renting a bus. Daniel Bryan doesn’t want to do it because it’s just the two of them and gas is expensive.

Bryan is a smart man. Damn 5 miles to the gallon? Hell naw.

There's no way Daniel Bryan would buy a bus on his own. Imagine THOSE Wrestling Road Diaries #TotalDivas

Brie Bella tells the Total Divas that she proposed the idea of all of them on the bus together for the 5-Day Tour, and that Daniel Bryan was on board with it. Brie tells Natalya and Naomi that Tyson Kidd and Jimmy Uso can come. Nikki Bella refuses to go because she just got back together with John Cena.

Daniel Bryan Party Tour Bus coming to a city near you

Five chicks on one bus. Nothing can possibly go wrong. #TotalDivas

Eva Marie asks if Summer Rae can be on the bus and Brie tells Eva that she can. Natalya doesan’t want to be on the same bus as Summer Rae since they can’t even be in the same room together. Natalya says over the weekend, she changed in the hallway due to her tension with Summer Rae.

Nattie, You got changed in the hallway? You're the Veteran! Don't Miz-cuse yourself? #TotalDivas

Naomi asks if Cam’ron is invited (She is.) Nikki jokes that they should’ve joked and told Cam’ron that she wasn’t allowed on the bus.

As long as Naomi doesn't have to stay on the back of the bus, I'm all for it. #TotalDivas

Summer Rae walks up and tells Eva Marie that she has her luggage, because they have a photoshoot to get to. Natalya tells Summer Rae that they haven’t had breakfast yet, but Summer insists they have to go. After Eva leaves, Natalya complains about Summer Rae some more.

Even when pulling rolling bags, Summer Rae has a fine "Entering The Room" walk. #TotalDivas

Summer Rae asks Eva Marie if they were talking about her while she wasn’t there. Eva Marie tells Summer Rae about Brie Bella’s Bus Idea and Natalya not wanting Summer on the bus. Summer Rae says that Nattie talks about everyone, and if she focused more on her career than gossip, then she should be Divas Champion.

Summer Rae with the BURN on Nattie! #TotalDivas

Summer Rae? Answers everything with an upward inflection? Like she's asking a question? And it's really annoying? #TotalDivas

DAMN, they going IN on Nattie….#TotalDivas

Did No One tell Summer Rae that there are cameras in the car?!? #TotalDivas

After making fun of Natalya, Summer Rae and Eva Marie agree to have each other’s backs.

The thing about @NatbyNature is she'll still be working 3 years from now and the WWE universe will all be like Summer who? #TotalDivas

Backstage, Natalya walks up as Cam’ron is taking photos of Eva Marie. Natalya reveals that she got locked out of her own Instagram account. Eva Marie reveals to Cam’ron and Natalya that she will be going to Afghanistan with the WWE.

"I um, I locked myself out of my Instagram account." One, how? Two, that's an awkward way to add to the convo.

Natalya: I locked myself out of my Instagram Eva: I'm going to Afghanistan. Natalya: Great! But seriously, guys. Instagram? #TotalDivas

Eva Marie brags about being hand-picked by Mr. McMahon and being able to ride WWE Private Jet. Eva is very excited and claims “All Red Everything” is taking over.

"Vince hand-chose me." And that tells you everything you need to know about why Eva Marie is around. #TotalDivas

I think they're sending Eva Marie to Afghanistan because she she stands out. That bright red hair is an auto-target. #TotalDivas

After Eva Marie leaves, Cam’ron and Natalya complain about Eva Marie’s lack of humility. Natalya tells Cam’ron that in the WWE, one day you’re the Cat’s Meow, but the next day, you’re whatever’s left in the litter box.

Natalya knows she's whatever is in the litterbox. #WWE #TotalDivas

At RAW, the Total Divas are backstage watching The Bella Twins take on AJ Lee and Tamina Snuka. Eva Marie and Summer Rae are cheering Brie Bella on.

Eva Marie: Brie! Get out of there! Summer Rae:Girl, attack! Eva Marie and Summer Rae treating Brie Bella like a Pokemon #TotalDivas

And then this happens…

Their reaction to Nikki being tagged in is everyone's reaction.

After the match, Nikki Bella sees the WWE Physician. Nikki finds out that she got her tooth knocked out by Tamina Snuka. The Physician tells Nikki that she will have to get dental surgery in the near future.

Nikki Bella thinks that she looks like a bum because of her missing tooth and thinks John Cena will find her hideous because of it. Nikki refuses to let John Cena see her like this and asks to get on Daniel Bryan’s bus. Natalya thinks Nikki should tell Cena, but Nikki just wants to get on the bus.

Wow! I don't know who did a number of Nikki Bella's psyche. Nikki, you lost a back tooth. You still look AMAZING! #TotalDivas

Shes acting like missing a tooth is a big deal. Chris Beniot sold shirts because of it!

If bums looked like Nikki Bella, it would change a lot of people's opinions on the homeless. #TotalDivas

After RAW, The Total Divas Crew gets on Daniel Bryan’s bus.

There it is! The Daniel Bryan Party Bus. It runs on vegetable oil.

Daniel Bryan explains his rules for the bus.

no sex or erections on daniel bryan's bus!!! #important #TotalDivas

[in my Chris Rock voice] There is no sex on the B-Bry bus. None. #TotalDivas

"No pooping on the bus." Daniel's got it down pat already. #TotalDivas

Bryan keeping it real with the rules. You annoying you get off.

Nikki Bella says that John Cena’s bus is way better than this. Tyson Kidd thinks Nikki Bella will be the first one kicked off the bus. Nikki Bella says the only reason she is on this bus is because of her injury and that she doesn’t want John Cena thinking she’s ugly. Summer Rae says you can’t even see it, but Daniel Bryan makes fun of her.

I hope Daniel throws Nikki off the bus while its moving

Nikki: Oh My God, I'm a bum! I'm toothless! John's bus is better than this bus *Minutes later the bus drives off without Nikki* #TotalDivas

The Total Divas Crew plays Truth Or Dare. Natalya asks if Summer Rae has ever slept with anyone in the WWE as the TDC makes fun, Summer Rae quickly denies this and asks if there are any rumors about her sleeping around. Bryan says he never hears rumors, but even he heard that rumor.

"I dont hear rumors, but I heard a rumor" hahaha. Daniel Bryan is amazing on this show

Summer Rae says she wanted to make fun of Nattie, but Natalya tells Summer that she doesn’t have enough ammo, then takes a shot at Summer Rae’s ring gear.

Damn, Nattie. I thought Pink was your favorite color, not Shade. #TotalDivas

Summer Rae calls Natalya out on being intimidated by her. Summer claims it’s always hot when Summer’s around.

Summer Rae: It's always hot when Summer's around. Natalya: Well I'm from Canada. It's Winter all the time. I'm FRIGID, BITCH! #TotalDivas

The tension is rising on that bus already! #TotalDivas

The Total Divas Crew is having fun on the bus. Cam’ron dares Natalya to give Tyson Kidd a lapdance. Natalya….

Nattie is a horrible dancer lmao

The Total Divas Crew toast to the bus and Nikki Bella’s tooth. Cam’ron’s announces that she is going to be in Rolling Out Magazine. The TDC is confused, but Cam’ron insists that it’s a good magazine.

Rolling Out…. nobody knows what that is. #WWE #TotalDivas

What the hell is Rolling Out Magazine? #TotalDivas

Cam'ron's on Rolling Out Magazine? Who came up with that name? Ludacris? #TotalDivas

Sorry, Cameron, I have not heard of "Rolling Papers" magazine or whatever you said. Sounds legit though #TotalDivas

Eva Marie trumps Cam’rons news by announcing that she is going to be in the Maxim Hot 100. Cam’ron says she’s happy for Eva Marie, but thinks Eva is trying to steal someone’s thunder.

Why Eva already try to 1 Up somebody!? #TotalDivas

Six girls on a bus. Nope, nothing can possibly go wrong. #TotalDivas

If you ever wondered what Eva Marie looked like without red hair or clothes, then those are the pictures for you. #TotalDivas 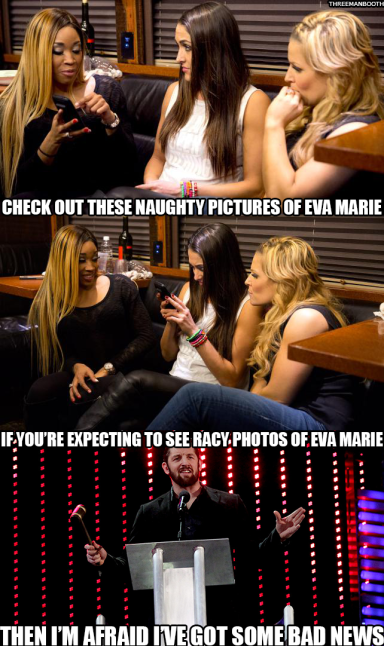