Posted on January 21, 2014 by keepitfivestar

A Nice Tribute to MLK on #RAW, Reminding Us to Keep the Dream Alive.

MLK entrant 30 in the rumble! He had a dream *points to Wrestlemania sign*

Congrats to Martin Luther King, Jr. on his induction in the 2014 @WWE Hall of Fame class! #RAW

Justin Roberts introduces The Authority, who is standing in the ring.

Stephanie McMahon welcomes us to WWE RAW, while Triple H hypes the Royal Rumble, and the Road The Wrestlemania. Triple H goes over the rules of the Royal Rumble and the stipulations, then gets ready to welcome back one of the participants. Triple H calls this man a foe/friend and says he evolved with this person.

Aw hell, are we already walking alone through pits of danger? But bedtime is in an hour! #RAW

Triple H gets ready to introduce Batista, but Randy Orton comes out instead.

Randy "Y'all not paying enough attention to me" Orton.

If Batista looks tired when he hits the ring, it's because he's walked for miles inside this pit of danger.

Randy Orton gets in The Authority’s face and asks who do they think they are. Stephanie McMahon flips the question on Orton, asking who the hell he thinks he is.

Stephanie McMahon tells Randy Orton that the eyes of the world were on WWE last week due to the announcement of the WWE Network and reminds Orton that he made a fool of himself.

Stephanie reminds Randy Orton of his vicious attacks on John Cena Sr., then calls Orton’s actions despicable, and unbecoming of a WWE World Heavyweight Champion. Stephanie tells Randy Orton that his actions may have been okay in the old era, but this is a new era and a new Authority, and if Orton doesn’t want to abide by that Authority, then he won’t have to worry about defending his WWE Championship anymore or being a part of the WWE.

I like how Trips just stands back and let's the wife take care of the hard work.

So the 3 Strikes Rule that Applies to Randy Orton is Hitting John Cena's Dad? Okay. Cool. He's Had 2 Already.

Randy Orton claims that the only reason he has so much pent up aggression because of The Authority putting him in an unnecessary rematch against John Cena at the Royal Rumble. Orton calls out Triple H on bringing back Brock Lesnar and Batista, and questions what their ambitions are. Orton says that The Authority has a problem with his actions affecting the WWE Network, but there wouldn’t be a Network without Randy Orton. Orton says if he could go back in time and do it all over again, he wouldn’t change a thing.

"WHY WON'T ANYONE TELL ME WHAT BATISTA WAAAAAAAANTS? LOOK AT ME, I'M RANDY ORRRRRRRRRTON, I'M A KITTY, PAY ATTENTION TO MEEEEE" #RAW

tonight is all about Batista.

Triple H tells Randy Orton that the first thing that’s going to change is that Orton is going to take the bass out of his voice right now.

"You're Going to Take the Bass Out of the Voice Real Fast." That Wasn't Orton, Triple H; that was Stephanie. It's her Queendom. Bow Down!

Triple H tells Randy Orton that the only reason the WWE made him the face of the WWE was because they believed in him, because he can walk through any obstacle in a way becoming of a WWE World Heavyweight Champion. Triple H says that it seems that Randy Orton has lost faith in himself, and this causes Orton to make unreasonable and irrational decisions.

After this lecture from The Authority, Randy Orton is going to barge into his locker room, lock the door and listen to Simple Plan.

I like how Hunter is acting he never beat up an old man before. That was a pastime of his.

Triple H says that John Cena, Brock Lesnar and Batista are all WWE Championship contenders, but thinks Randy Orton can rise up and walk through it. Triple H tells Orton he needs to fix what is broken tonight and he will give Orton the opportunity to start tonight by facing Kofi Kingston again.

Triple H is the kind of coach that uses one kid to shame all the others. That Kid is Kofi Kingston. "Kofi's Beating You, Randy! Step Up!"

Triple H informs Randy Orton that there will be a camera in the parking lot waiting for John Cena to arrive, and when he does, that camera will appear on the Titantron, so Orton will have the opportunity to step in the ring with John Cena alone and Make It Right.

Triple H: I want you to make this right. Kevin Nash: *Barges in* MAKE THIS RIGHT! MAKE THIS…RIIIIIIIIGHT!!!

I love Batista's theme, even though I don't care for the band Saliva.

Did Batista start walking alone AFTER he left Evolution or before?

Batista does his pyro taunt.

What the hell is Batista wearing? Who told him that was a good look? Is he trying to seduce divas again? #raw

After a loud Batista chant, Batista gets on his hands and knees and kisses the ring.

Batista: *Kneels down and kisses the ring* Mmm. I've got the scent of the Divas now. I'm on the hunt….which one's Eva Marie?

The girl screaming in the crowd "I love you Batistaaaaa!!", really? Okay, not gonna knock your choices.

He's out of breath from showboating. Come on.

Batista clears up why he is back in the WWE. Batista tells Randy Orton that he’s back for the WWE World Heavyweight Championship, so whether it’s Orton, John Cena or someone else, he’s back to win the Royal Rumble and back to be WWE World Heavyweight Champion, and back to headline Randy Orton. Batista tells Orton to “DEAL WITH IT” then drops the mic.

I'm sorry, Batista. Did you say you were back? I didn't quite get that.

Batista is the toughest dude with a belly button tattoo you'll ever see. #wwe #raw

Orton with the ate ass face

I hope Randy Orton and The Authority get their own sitcom on the WWE Network where everyone just disregards Orton's feelings.

Batista had eight words to say and he almost forgot six of them. "What did I come back for? …Paper plates? No, that's my grocery list…"

Batista celebrates with the WWE Universe.

I think I've seen this promo before, like maybe this time last year? It seemed a lot more electrifying the first time around. #RAW

Those aren't jeans, Those are jeggings. This dude is wearing jeggings. That's why his Batista bop wasn't good. He couldn't breathe.

Match 01: The Shield vs. The Brotherood and Big E. Langston

When Goldust looks at Big E. Langston, He Gets Flashbacks to Ahmed Johnson.

I like how all three members of Shield uniquely jump the barricade. A dramatic bunch those three are.

I gotta say, this first round of King of Trios is off to a damn good start.

Cody Rhodes goes for the Disaster Kick but get caught with a Superman Punch from Roman Reigns.

Goddamn that was a good match. #RAW

Superman wishes he could punch like Reigns. #wwe #Raw

I don't know what to say besides how much I like The Shield. #Raw

Daniel Bryan!!! This is the reaction Batista wishes he had. #Raw

I'm glad Daniel Bryan is back to wearing the greatest tshirt on the planet. #raw

After a loud Daniel Bryan and “YES!” chants, Bryan jokes that and people say he shouldn’t be the face of the company. Bryan says a lot of people asked him last week if he had a plan when he jointed The Wyatt Family. The WWE Universe chants “YES!” and Bryan says the WWE Universe figured it out. Bryan says that to take down a guy with a Messiah Complex, you have to take them down them physically and mentally.

Daniel Bryan's Plan for the Wyatts: 1. Kick Heads In 2. End of Plan

Daniel Bryan says in order to take out The Wyatt Family physically and mentally, he had to do some things he wasn’t proud of, like keep his friends in the dark, absorb punishment to be part of the Family and stand side-by-side with 3 men he despised wait for that moment.

Daniel Bryan says that moment came when he got Bray Wyatt inside of a steel cage, one-on-one.

Daniel Bryan learned a lot of psychology under Dr. Shelby.

Daniel Bryan says The Wyatt Family is big fans of “Following The Buzzards” but Daniel Bryan doesn’t follow anybody. Bryan says last week, he became the buzzard and he chewed on the carcass of Bray Wyatt. Bryan tells Bray Wyatt that he exposed him as a false prophet, and this Sunday, at the Royal Rumble, he’s going to do it again. Bryan reveals that Luke Harper and Erick Rowan are in the Rumble, which leads Daniel Bryan to face Bray Wyatt by himself.

Daniel Bryan is not going to be in the Rumble. 😦 #wwe #Raw

So…is Daniel Bryan gonna be in the Rumble too? Otherwise we shouldn't be Yessing.

Daniel Bryan starts chanting “YES” until he’s interrupted by Bray Wyatt. Bray Wyatt calls Daniel Bryan a traitor, who didn’t expose him, but exposed himself as a traitor and coward. Wyatt says that the WWE Universe look up to him because they chose to kneel. Bray wants Daniel Bryan to go home, hug his Mother and tell her he’s sorry, because everything that happens to Daniel Bryan from now on, is his fault.

Bray: "You only exposed yourself!" Me: "That's illegal." 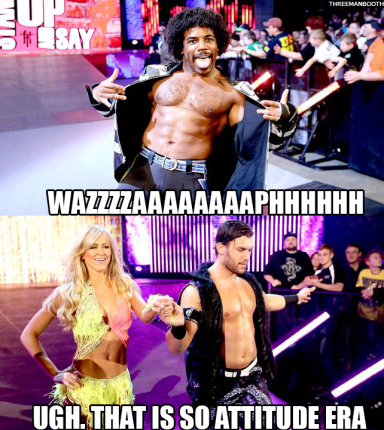 I know it's #MLKDay, but do we HAVE to put R-Truth on commentary?

As much as I support Xavier Woods, I can't support anything that has R-Truth on "commentary". #raw

Xavier Woods matches Fandango better than Summer Rae does. They Could Be a Tag Team.

Xavier Woods is running out of people with dance moves to wrestle. #wwe #Raw

Emma's cameo was longer and better than the Fandango/Xavier Woods match. #wwe #Raw

Backstage: Brad Maddox says that he’s glad he thought of bringing Batista back on RAW. Kane gets ready to argue with Brad Maddox, but Stephanie McMahon interrupts and asks Maddox to leave.

Next week, Stephanie McMahon is going to teach Kane to not pee on the carpet and to not hump her clothing when its on the floor. @WWE #RAW

If Kane doesn't apologize, will Stephanie send both him and Punk to Dr. Shelby? Is #TeamBestHell Far Behind?